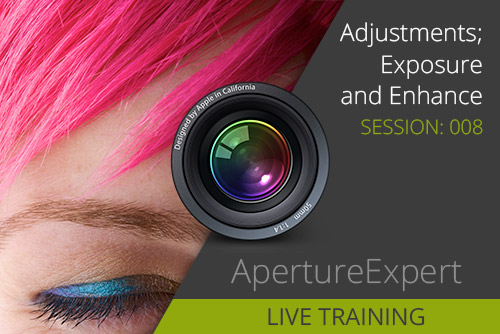 This is the first video in a long series about Adjustments in Aperture 3; starting with a deep dive into the Exposure and Enhance tools.

The next Live Training has just been scheduled. This will be our first foray into Adjustments!

Apologies for the long gap between training; most of you know I’ve been moving cross-country. The internet connection where I am now is rubbish, so I’ll actually be broadcasting over an impressive AT&T 3G connection. Fingers crossed!!

Will You Buy Final Cut Pro X for Aperture?

I have now gone through every bit of marketing that Apple has provided, and have added EDIT points to my original notes below.

As anyone knows who followed my little cross-country journey (or any recent trip of mine!), I’m a huge fan of the iPhone app Instagram. I love its simplicity, and how easily it cross posts to just about anywhere. One of those “anywhere’s” is Flickr, and as you know, Flickr and Aperture have a wonderful two-way syncing relationship.

The video from yesterday’s Live Training 007 “Keywords” is now available in the Catalog for just $2.00 as usual! I broke this one down into very detailed chapters, and those are all listed in the Catalog as well. 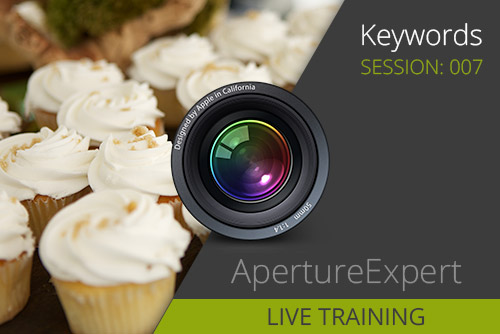 This session is all about keywords in Aperture 3.

The iTunes SD & HD Feed Are Back Up

Good news for those needing the SD feed of the podcast; it’s back up and running. Thanks for the users that reported it being down in the first place. If you see it happen again, do let me know!

In case you need to re-subscribe, here’s the links:

The latest Live Training, Session 007 “Keywords” has been scheduled. Grab your seat early!

Brushes in Aperture are handled quite differently than what you might be used to in any other application. Whenever you choose to brush in an effect, for example Dodge or Burn, you’re not actually dodging or burning the photo. You are in fact painting a layer mask between two versions (effectively two invisible layers) of the same picture—the original, and the dodged (lighter) or burned (darker) one.

This gives you two levels of control. First, while brushing, you can brush the effect in either more intensely or less intensely by adjusting the strength of the brush. What you’re really doing is choosing a black brush (0.0) or a white brush (1.0) or some level of grey in-between (0.2, 0.5, etc.). Second, you can adjust the intensity of the effect itself in the adjustment settings—at any time. For something like dodge or burn, this is one slider. For something like Curves, well, you have the entire Curves tool at your disposal. This lets you selectively brush the effect in and out of the photo, but then change the entire adjustment globally as well. Once you understand this, it makes brushes in Aperture arguably more powerful than any other software out there.

Here’s a detailed explanation, and something you can follow along with to really grok it yourself at home.

Let’s start with something without a brush at all, for example, Curves. I’ll make this really dramatic, so it’s easier to see. One of our readers posted a notification of an Aperture 101 course at the Northeast Wisconsin Technical College. It’s a significant discount, so if you’re interested in becoming certified, or just want to learn more about the app, it’s worth checking out. Here’s the post.

Podcast Feed in HD in iTunes (SD Feed Down?)

Some time ago we realized that the iTunes feed for the podcast wasn’t showing up in HD, and that’s since been fixed. However the SD feed appears to be no longer working (or even up-to-date), so we’re investigating that.

Definitely go for the HD feed anyway. Who wants to see the Mac screen at half-size? The HD feed is broadcast exactly as it’s recorded, at 1280x720 pixels. No scaling = a very clear picture!

The latest Live Training Session, “Listener Questions” is ready to download! The questions we answered included:

It looks like a couple of updates hit the Software Update that you’ll want to install. As always, just select (Apple menu) > Software Update… if it hasn’t popped up on your screen already.

This one will be greatly welcomed by owners of some of the latest digital cameras. The updated supported camera list adds: 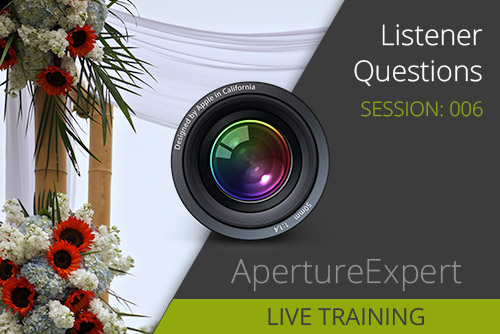 This session is all about you and your questions.

The “Listener Question” edition of ApertureExpert Live Training has been scheduled. Check out the list of user-generated questions we’ll hit and register here.

As discussed on the twitterverse, the next ApertureExpert Live Training will be entirely Q&A based, instead of just doing questions at the end. This means questions will be vetted in advance, and we’ll probably wrap it up with a live Q&A, specifically for follow-up questions on what we just covered.