Emptying the Trash in Aperture 3—What Really Happens?

UPDATE: Scroll to the end for a video version of this tip!

Aperture 3 added the Trash folder so deleted photos and projects are easily recoverable, but once you empty the trash, what really happens? How are managed vs referenced files handled on deletion? Can you accidentially delete a photo that’s still in use elsewhere in the application? And is there any hope after hitting “empty trash”?

These question and more, tackled below…

Let’s throw some stuff away!

The best way to find out what happens is to try it out, and check the results! So here we go. Here’s what’s going in the trash. Project A which contains Photo A1 (managed) and Photo A2 (referenced) in it will go in the trash. We want to know what happens to the master files (the .CR2s that were imported originally). Remember, one of those master files lives in the Aperture library (the managed one), and the referenced one is floating around in the Finder somewhere.

What Problems Have You Had Migrating From iPhoto to Aperture?

The next eBook/video training I’m working on is for migrating from iPhoto to Aperture. I’d love to hear from you what specific problems you’ve encountered so I can be sure to address them in this training.

Please comment below… don’t be shy, even if you know it was user error, let me know. If you think it’s a bug, let me know. Confusing? Complicated? Unexepcted results? Whatever your experience, if less than a 100% flawless transfer, I want to know about it.

The next Live Training session has been announced… don’t delay in registering, I’ll close registration at 15% over capacity, and remember, it’s still on a first-come basis the day of. Register now!

Let's discuss what size to make your watermark, what stylings to use, create some using Photoshop and two FREE solutions, and set them up in Aperture.

Did you know that Aperture can watermark your photos on export? Don’t feel bad if you didn’t; a lot of people don’t know it’s there. It’s a feature that has remained essentially unchanged since v.1, and to be honest it’s not that straight forward. It appears simple enough, but can do strange and confusing things on export.

I’ve been using essentially the same watermark for years (I just kept changing the year on it) and probably just got lucky in making one that worked so long ago! So I decided that once and for all, I’d figure out what is and isn’t happening in Aperture when you choose to watermark your images.

Also, one of the frustrations for many is that you need to create the actual watermark file outside of Aperture—and frankly, not everyone owns Photoshop. So part of this adventure was to find a way to create a watermark file for cheap, or even better, for free.

To enable watermarking, all you have to do is open the Export presets, and turn on watermarking for one of the presets, and add a PNG or PSD file to it. That’s it. Of course, it’s not really that easy, but here’s where the work is done. The Image Export settings in Aperture 3 reveal the Watermark options

So really, all you should need to do is choose an image, decide where to put it, and off you go. But notice that little Scale Watermark option? Bizarre behavior. What opacity works best? What kind of file works best? All of this and more is what we’re gonna cover here. 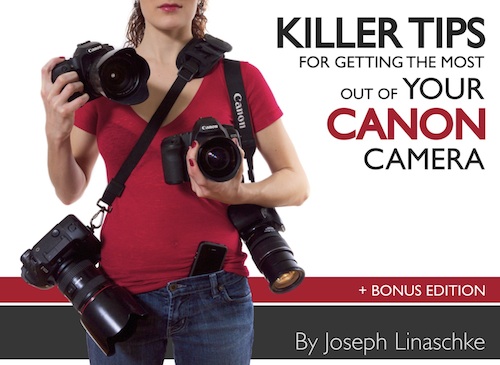 This book was written for the budding photographer, the proud new owner of a Canon dSLR, or the dSLR user who’s never gotten that dial on top of their camera out of the fully automatic, “green square” mode. If you’re ready to step up your game, this book’s for you.
$9.97
Order now

The video is up, check it out on the ApertureExpert.tv page! Just $2, as promised, and you can watch the first 10 minutes for free to see what it’s all about. 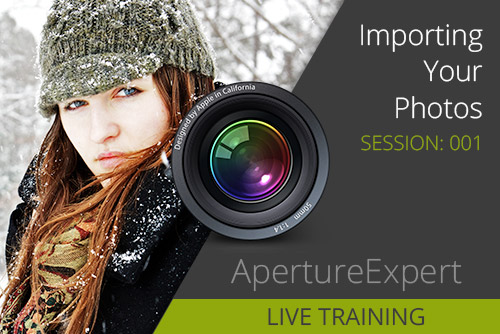 A User Tip—Now a Podcast!

Reader Kenneth Lim wrote a great tip he called the “Reverse” Vibrancy Slider today, and I loved it so much I made a video of it. Don’t forget about the User Tips area, and be sure to post your favorite tips, too. Maybe I’ll make yours into a video as well!

Check it out here…

The ApertureExpert Podcast is not a traditional podcast; we’re not on a weekly schedule, nor is it an interview show. It’s simply a visual version of the tips that are posted on the main ApertureExpert Tips page (that’s this one).

These new podcasts allows you to read a tip, watch a tip, or do both—whatever suits your nature. And best of all, it’s all free!

The new, FREE, LiveTraining initiative I announced over a month ago is finally here. We’ve had two successful tests and we’re ready to try this for realz!

I’m thrilled to announce the latest Preset Packs, #3 and #4 — both chock full of delicious textured goodness! 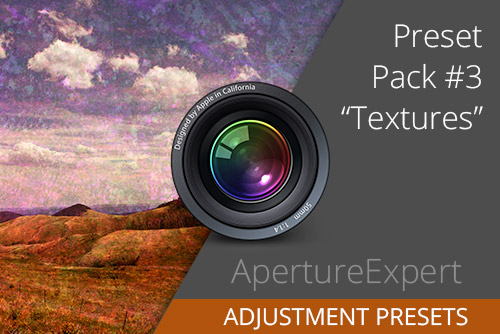 (Updated from the original Feb 9 post, as reader John Crosby found the solution to the “unreliability” problem I was having. “In quotes”, because it turned out to be user error!)

By now most of you have discovered that if you zoom into multiple images simultaneously in Aperture, then hold the shift key while dragging them around, the images stay aligned. This is a perfect way to compare the same area of different photos of the same thing—for example to pan around several shots of a group portrait looking for the one where the fewest people are blinking or making a funny face.

Continue reading to see the rest—and watch a video on it!