This “ATEM (mini) Tips” series of short video tutorials for your Blackmagic ATEM hardware includes tips for all users, from beginner to advanced. Scroll down to see more in the series!

This is a collection of all PhotoJoseph LIVE shows, from the PhotoJoseph YouTube channel. Additional episodes are listed below!

The ATOMOS AtomX Ninja CAST is here — but who's it for? It's a switcher, but not an encoder, which makes it more like the $295 ATEM Mini than anything else — for some use cases, at least!

🎧 Music in this Video

I'm now using MusicBed for my music selection, and it's incredible! One of the BIG things I like is that every track with lyrics includes an instrumental version, so you can easily cut back and forth in your edit when you need distracting lyrics to go away! Learn all about MusicBed here. and get your first month free when you purchase an annual subscription by using my coupon code PHOTOJOSEPH at checkout! 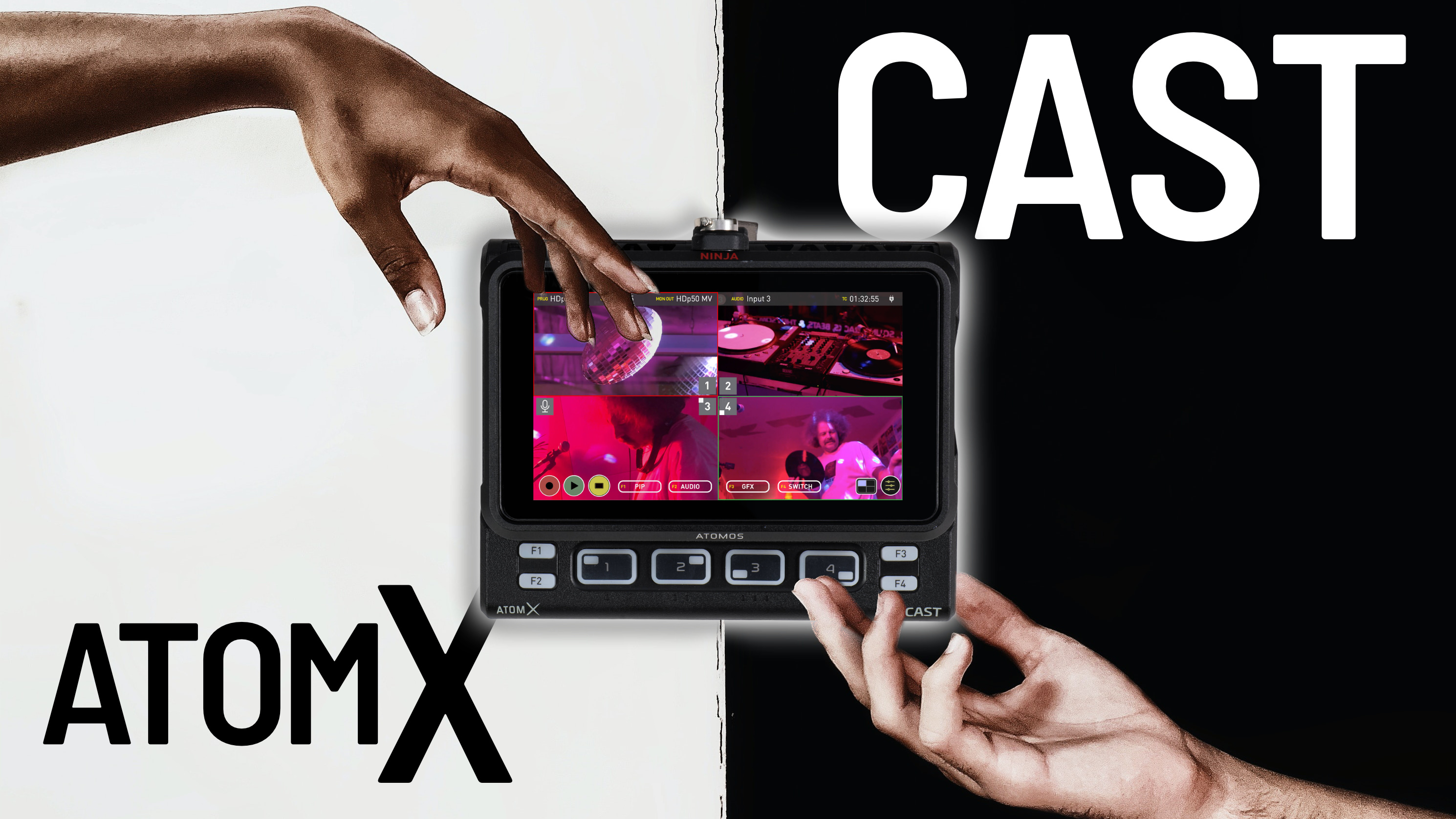 Reply from PhotoJoseph
on Wednesday, December 15, 2021 - 9:08pm
Join us in the Discord! To do that, join the channel at YouTube.com/photojoseph/join — all tiers have access to the Discord, and your support helps me keep YouTube ads off these shows!
Permalink

Reply from Nathan Lear
on Tuesday, May 17, 2022 - 4:26pm
For the atem mini's, you need an external monitor to preview your camera angles for switching, so there is another expense you need to consider. And if you dont have the pro versions, you dont event get a multi-view and need a special monitor that can display and pass through 4 hdmi inputs. I like the ninja cast because it gives you a preview, a good quality recording of your program out in easy to edit codecs and you still can selectively display a basic preview to an external monitor and your program out to a house/producer feed and send the webcam signal to a pc with the encoder software and fancy graphics to do a nice live broadcast. They also just dropped the prices so can get a ninja 5 with the ninja cast for $650 or better.
Permalink

Reply from 50450720
on Wednesday, May 4, 2022 - 6:24am
I expect to see an updated version with encoder built in at sometime in the future.
I was disappointed to see this was only 1080 compatible, if its just a switcher/recorder I would of expected 4k recording capability built in, without 4k I struggle to see the advantage over the competition.
Permalink

Reply from PhotoJoseph
on Saturday, April 16, 2022 - 8:23pm
But… it’s not even close. It’s a different product for sure. But not even close.
Permalink

Reply from Geoffray Juillard
on Friday, April 15, 2022 - 12:54pm
Hey Joseph, i have an important question. Considering i buy the Yolobox Mini and connect it with the Ninja Cast, i have 4 cameras and also can make replays while recording ? Replay feature is really important for me and i stream without a computer, it would be great !
Permalink

Reply from PhotoJoseph
on Saturday, April 16, 2022 - 5:35pm
You would do the replays from the cast? Yeah I think that’d work. Think it through like this — the YoloBox would just be used for streaming (maybe adding lower thirds or something too), right? So if you can do it on the AtomX Cast now when it’s outputting to a monitor, then there’s no difference when it’s outputting to the Yolo.
Permalink

Reply from Dana Jenkins
on Tuesday, April 5, 2022 - 5:45pm
Atomos AtomX Cast, I BOUGHT THIS AND THE FIRMWARE HAD TO BE UPDATED BUT THE USB-C DOESNT WORK BOTH B&H AND ATOMOS SAYS IT NEEDS TO BE REPLACED OR REPAIRED BUT SINCE IM STILL WITH IN MY RETURN PERIOD IM GETTING RID OF THIS AND LOOKING ELSE WHERE. THIS IS NOT A RELIABLE PRODUCT IT HAS LOTS OF ISSUE'S WHICH THIS GUY DOESNT TELL YOU WOULD OF BEEN NICE TO SEE HONESTY
Permalink

Reply from PhotoJoseph
on Tuesday, April 5, 2022 - 7:49pm
wow. you came here to accuse me of being dishonest because you have a faulty unit? That’s definitely my fault. I told B&H to ship you a dud! C’mon, get real. Sometimes tech fails. If this is the first piece of tech you’ve ever bought in your life that went bad and had to be replaced, consider yourself extremely lucky. Sheesh.
Permalink

Reply from AFRICA HOUSE TV
on Saturday, February 26, 2022 - 7:31pm
HEY JOSEPH ANY IDEA HOW TO REMOVE THE REC SIGN ON CANON C200 WHEN YOU ARE RECORDING WITH NINJA V ? PLEASE HELP OUT . THANKS.
Permalink

Reply from PhotoJoseph
on Sunday, February 27, 2022 - 9:39pm
SOUNDS LIKE YOU DON’T HAVE CLEAN HDMI ENABLED. ALSO, YOUR CAPS KEY IS STUCK.
Permalink

Reply from Xavier Francis
on Wednesday, January 26, 2022 - 10:45am
So more of a quick IMAG gig, or maybe a secondary on-site use case.
I was wondering about this, also, is it limited to 1080p?
Permalink

Reply from subhamoy das
on Sunday, January 9, 2022 - 9:59am
Hi Joseph, I got myself an S5 recently. I was thinking to get an external recorder. Is there any other option other than BM or Atomos in the market or any DIY set up? Thanks
Permalink

Reply from PhotoJoseph
on Wednesday, January 12, 2022 - 5:33am
I only know of BM and ATOMOS, sorry
Permalink

Reply from subhamoy das
on Wednesday, January 12, 2022 - 5:38am
@PhotoJoseph Okay thanks Joseph
Permalink

Reply from Vladimir Easyshave Lakobrija
on Wednesday, December 29, 2021 - 1:52pm
Cool video. But to be honest ATEM mini pro ISO is much much better. What I like the most with BM Atem mini pro ISO is option to record all files + u get project file so later in editing you can easily fix mistake or do quick re-edit. Let's see what's coming in the future... This is just first model.
Permalink

Reply from fray fray
on Friday, December 17, 2021 - 2:35am
nice video and on time i was going to buy one but i think your right the atem with encoders is a better choice ..
Permalink

Reply from DIRECT ACCESS by Shorey
on Friday, December 17, 2021 - 1:32am
YOU PRESENT INFO AND TECH REALLY WELL JOSEPH .

Reply from INFO GUERRA
on Wednesday, December 15, 2021 - 11:01pm
I bought it just because I have the the Ninja.
I do live streaming using the black magic design web presenter as an encoder.
Have to say, it is working great.
Permalink

Reply from PhotoJoseph
on Wednesday, December 15, 2021 - 11:03pm
That’s great to hear. Yeah with those pieces in place I can see how it’d work well.
Permalink

Reply from Seriouz Filmz
on Wednesday, December 15, 2021 - 10:56pm
I returned mine and got a yolobox for live-streaming. Only downside is the delay on non active videos. This device was amazing for directly connected to obs.
Permalink

Reply from Matt Grover
on Wednesday, December 15, 2021 - 10:30pm
I guess it’s probably better to compare this to the ATEM Mini Pro over the original Mini, not from a streaming perspective, but from a recording one. As far as I recall, the original mini doesn’t have recording built in. With the NinjaV you’re getting a ProRes recording of your mix, so really, the comparison setup would be the ATEM Mini Pro PLUS a Monitor for Multiview, which if you use, means you lose the HDMI out for any live relay. I don’t know how it compares to the Yolobox in this regard.
Permalink

Reply from PhotoJoseph
on Wednesday, December 15, 2021 - 11:00pm
Are you getting a ProRes recording? That came up in tonight’s live show and no one knew. If so, then that’s an advantage (I don’t have it anymore so can’t check). You’re right about the original Mini not having record, so that’s true. And while it’s correct as well that you’d be giving up the HDMI on the ATEM Mini Pro by attaching a monitor, you don’t need it to record as that’s over USB, and you don’t need it either to stream as that’s over Ethernet. I’d argue the usefulness of a ProRes program recording though, come to think of it. What are you doing to do with it that the ProRes should make a difference?
Permalink

Reply from Matt Grover
on Friday, December 17, 2021 - 1:37am
@PhotoJoseph Yeah, recording on the Mini Pro over USB, but the HDMI for MultiView so you're not cutting blind, which then means you don't have the HDMI for a PGM output to screen/projector etc., Whereas the Ninja setup has the screen built in, displaying the multiview leaving outputs (2 of them!) free for PGM. I've got a Mini ISO, which is fine, was using an original Mini on a job the other week and the lack of multiview was painful!. I guess in the context you see the Ninja CAST being used (live relay), then a built in ProRes record would be for any post-event edit work, but yes the Mini Pro has record, which is why I feel it's a better comparison than the original mini. As always it's picking the right tool for the job and budget of course :)
Permalink
© 2022 PhotoJoseph.com All rights reserved.
randomness