Hi All, as Apple have screwed up the text formatting in Aperture books - they have ‘forgotten’ to include text alignment and simple text kerning tools in the latest system update. ( they were present originally but now don’t exist) I know that they have dropped support for Aperture but I purchased this as usable ‘professional software - which it isn’t. There has been an ongoing problem with text handling in books which Apple has never been addressed - Yes I have many times sent feedback over several years and rung them and complained with no satisfaction. Rant over. To make up for Apples neglect I am trying to find a way to format text and import into Aperture Book layout. I would like an opinion on the best way to do this. I have tried Photoshop and Illustrator and Indesign. My tests seem to point to using Photoshop and exporting as a psd which Aperture will then import and I can paste into a book page. This seems to work OK but never looks quite the same as the rest of the existing text in the book. Just wondering if anyone else has come across this problem and if anyone has any other suggestions to make.

Text alignment can be changed via a context menu. Right-click on a text box and choose ‘Text Box Alignment’. To solve the kerning issue I’m using TextEdit. Just copy&paste the text to a text box in an Aperture book. Kerning, spacing and baseline are kept. I’m fine with the options there.

Text has never been Aperture’s strong point in the book design phase.  I usually just do an entire page in Photoshop to do any meaningful text, as you suggest.  PS is just so much more powerful with what can be done with text than Aperture is.

Hi, Thanks for the replies. For some strange reason I can no longer see them on-line - just as well I  have the e-mails!

Ingmar - Thanks for your suggestion. I have also tried this many times and would love this to work . However for me when I copy and paste into Aperture, neither font, kerning or any attributes are copied. I just get the default Aperture book font and no kerning.

Is there some special way you are achieving this? If so I would be happy if you could share.

Wow.  Thats amazing. This has never worked for me. I must have tried a hundred times.

I will update my os and report back.

Well I have updated to 10.10.5 and tried again but still get the same results . i.e. the pasted font is nothing like the one in textedit.  Repaired all the permissions but still no luck. wonder if I should reinstall Aperture? 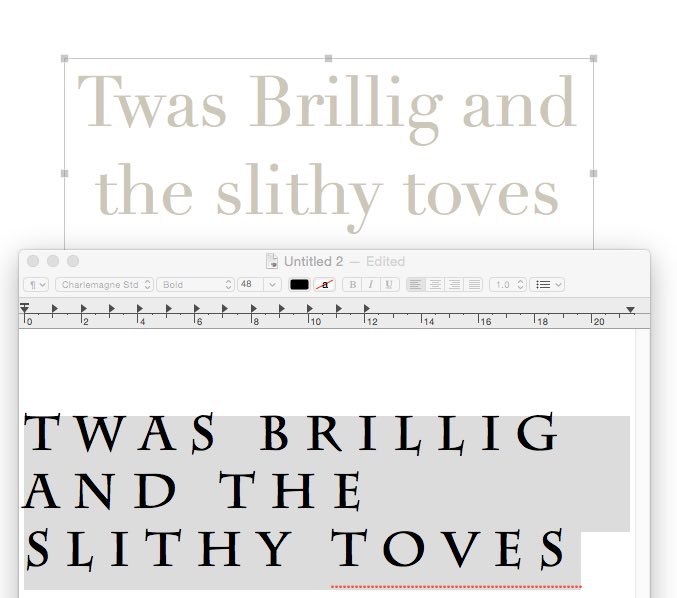 If I start in TextEdit it doesn’t work for me either. Sorry for not being clear on that.

Ok. that makes sense. Ill give it a try.

many thanks for sharing this information.

PS  I discovered that it is possible to drag text from Aperture to the textedit box - but not vice-versa.