Starting Fresh: Set up Your Aperture Library for the New Year

I start a new Aperture library every year. I have several reasons for this. If I just kept adding work to one library, that library would become massive and while Aperture can handle it, it’s no fun when it’s time to rebuild, repair, or move that library. It takes a long time to do these things to a massive library. It can tie up a large library for hours or even days.

My library organization is based on date. Every project is dated and organized in a folder by month. Starting every year makes a lot of sense. Plus, the work I do revolves on dates. For instance, I shoot a lot of sports and every season is revolves on the year. The contests I enter are annual.

The only time I think a photographer should think about organizing a library on a system other than date is if they don’t archive a high volume of images and they are stock photographers that shoot categories of subjects. For instance, they may want to organize their library with Projects inside of folders named things like, Flowers, Beach, Forest, Insects, etc. They may also want to keep a career library. Of course, this can easily become a big mess. What if you have a photo of an insect on the beach next to a tree and a flower? Keywording would very important in a library like this.

The other consideration is to create multiple libraries to handle various aspects of photography. For instance, I decided last year to create a “Wedding” library to keep that separate from all my other work. I found that I needed to see all my weddings in one place when it came time to build a new wedding website and portfolio albums.

I’ve also created special libraries for big projects. For instance, I shot a long term story on affordable housing and created a separate library for only that project and ran it off my laptop. When I was done, I imported the selects into my big 2012 library.

I’ve been using Aperture since 2005 and since that time I’ve fine-tuned my library structure. My main three photographic activities are my newspaper, freelance, and personal work. Therefore, I created three Folders named exactly that. At the end of the year, I create a fourth folder named Contests. This is where I organize and prepare images for the three big contests I enter. This how I start my Aperture library at the beginning of every year.

As a landscape and wildlife photographer I much prefer to organize by place, i.e. Big Sur. I could never understand the benefits of organizing by date if you shoot professionally.

Me too, anyway it’s posible to determine dates through the smart albums

To me it makes more sense to structure your libraries by some means that can’t be derived easily from the metadata. For example, if you always fill in location info then there is no need to structure travel images by that element. A smart album will do that work for you (ie. Europe, or Italy, or Rome). Even smart albums on keywords mean you don’t need to structure your library based on that data (i.e. Cathedral, Lion, Automobile). It does need to be intuitive both to you and to whomever might inherit it from you.

The example screenshot in the article shows Personal, Freelance, Newspaper as major folders. That makes sense. That structure isn’t easily derived from the metadata, but it is relatively intuitive.

Thomas when you have multiple libraries, what is your process when Apple pushes out an upgrade? Do you then open each older library to ensure all are sound with the new version (the library metadata generally gets altered by the process)? Or are you more relaxed and just upgrade when you need to use that library?
Cheers
Steve

Organizing a library for digital files based upon creation date of the files makes perfect sense, especially for a referenced library in Aperture. Simply for the fact if you need to search out something using Finder or another software solution … Additionally if you would ever decide to move your files to another cataloging software solution other than Aperture, by using a consistent structure based upon creation date, much of the hard work is already accomplished.

By also including a consistent and well planned keyword, captioning, labels and ratings … allows the user and their choice of software to easily, quickly and accurately search out needed items regardless of the software brand, platform or OS options chosen to get there.

In the end, whatever system you use must stand the test of time … ordering by creation date is one method that can withstand that test … quite easily.

Butch brings a great point. I should just copy paste that into my article!

Organizing by place wouldn’t work for me. I shoot 20 games a year in one stadium and eight in another! Every photographer, studio and newsroom I’ve worked for the past 24 years organized by date, so there must be some merit to it.

I don’t worry about upgrading libraries after an upgrade. I just pay the price when I need to use it. I’m a proponent of not doing work I don’t need to do.

By date, by place, by topic,… All the organization that we can debate is a view on the metadata we should have in our library. Therefore for me the folder/tree structure depends a lot on your main way to navigate through your library. A landscape photographer will certainly appreciate to be able to browse by places by season, a portrait photographer by person by shots etc etc… So nothing wrong, nothing right as long as it matches your need.

One drawback for me to split the library is that you cannot use some of the new features like faces and places. Are you using them?

Another philosophical question, are you using the same structure for your projects and for your albums?

I like the idea of a new 2013 library.
My present library has 20,000+ images.
My question. Can I move projects from the old library into the newly created 2013 library?
Maybe I’ve set up my library wrong by storing projects in folders?
I create folders based on year, projects based on location, subject or event (ie. grand canyon, mom’s trip, birds, etc).
Hope this makes sense.
Thanks
Britt

I “accidentally” force quit my Aperture library as it was starting up and now it’s been spinning for the last 16+ hours regenerating previews. I’m going to take your advice and split this huge library up by year. All my images are referenced and I know that you can export projects into a new library, but how do I remove those projects from the old library? Just select and delete them or is there a better/safer way?

Britt: I wouldn’t start a new library just because you have 20k images. That’s not very much as far as Aperture is concerned. My 2012 library has over 148k and it works fine. You can move Projects to your new library but you must export them as a library first. Then “Add” them.

Jed: If you no longer need a Project and want to delete it you just delete it. If you are uncomfortable with this, maybe just make a folder called “Obsolete Projects” and store them in there until you are ready to dump them.

You might also think about turning off “Generate Previews”. Joseph does this and just generates previews when he needs them. It’s saves a lot of storage space and processing power.

My present one and only library is getting full space-wise in the inspector panel. I have folders based on the year and I have a group of iPhotos from 1999-2009, then folders of each year since then. Within each folder are projects from each year organized by y-m-d and title. My inspector is getting full and I’d like to make some room. All of my pictures from 2010 and back have been referenced to an external 2T HD. So I am not worried about my computer HD space. What I’d like to do is clear up some space and move some of the years to a new library, say 1999-2010. If I move them will all of the smart folders that I have created for 5-star pix, my various lenses, certain keywords, etc move with them or will they stay in the new library/renamed I create for 2011-2013?

You would set up a date search. Make a new Smart Album and be sure that the Source is the entire Library. Click on Add Rule, then choose Date from the drop-down. Set the date to is in the range and enter your dates. You'll need to include the year, so in my case I added 2013-12-31 to 2014-01-01 (I believe the order of year/month/day will depend on your date formats set in the System settings. Or it could be that Aperture always does YMD, I don't recall). 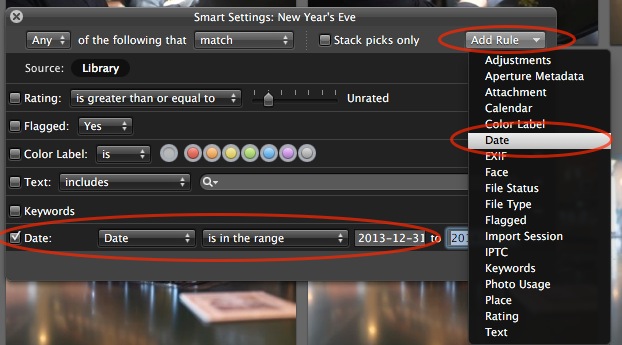 If you want to have multiple years in one Smart Album, then be sure that the search limiter (top right) is set to Any, and then just add another rule for date, and repeat. You will have to do one for every year, but that'll do it.

There might be a way to have it search just month and day, ignoring the year, probably through an EXIF search.

Thank you, then for each year i need put one more rule. I need for all years..