The new camera app in iOS 8 has introduced a very cool new feature; exposure compensation. For anyone used to using a “proper” camera, i.e. a dSLR or mirrorless body, they know the incredible value of such control.

The way this works in any camera is quite simple. The camera decides what the exposure should be using whatever auto mode you happen to be in, then you tell the camera to make the photo brighter or darker using “exposure compensation”, also called “EV compensation” (Exposure Value). On a proper camera, you'll usually see this in ½ or ⅓ stop increments, for example -1⅓ or +2 stops.

In the iOS Camera app, it's the same principal, except there are no numbers. Just a slider to move the exposure up or down, and of course you see a real-time preview of the exposure on your iOS screen.

To activate this, compose your shot, then tap and hold on the screen to lock auto focus (AF) and auto exposure (AE). You'll want to tap on the most important part of the shot; the area you're focusing on and exposing for. You'll see the big yellow AE/AF LOCK on screen, as well as a box where you tapped. This is all the same as it was with iOS 7; the new bit is the little sun icon to the left of the exposure/focus box. 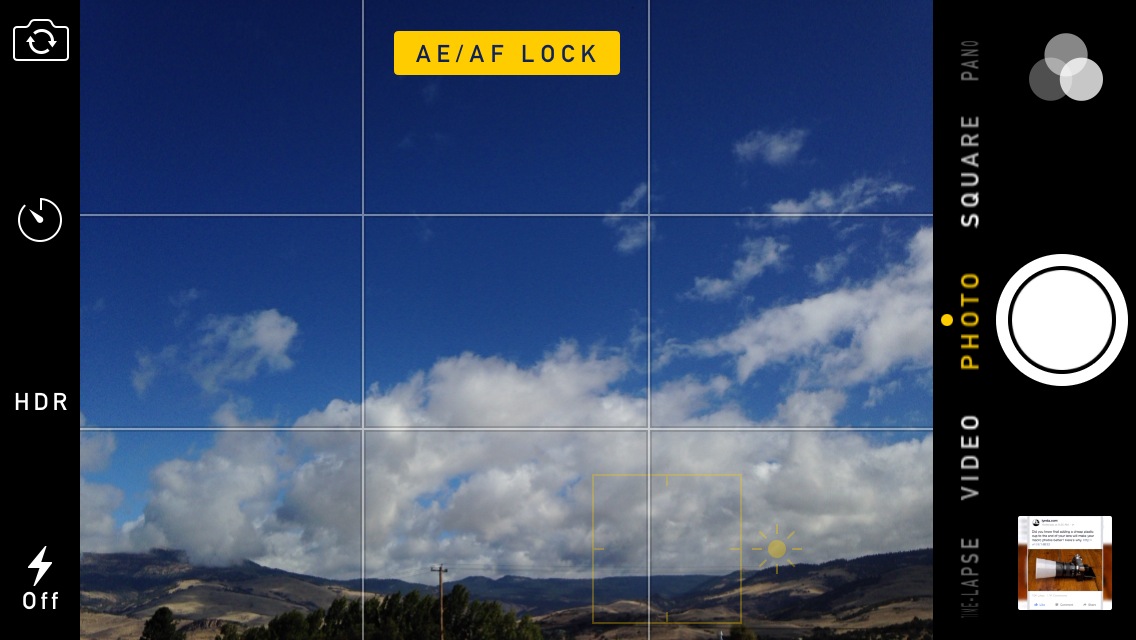 By tapping and holding on any part of the screen, you will activate the auto focus (AF) and auto exposure (AE) lock

Now to adjust exposure, just drag your finger up and down the image on screen. It doesn't matter where you drag; any up/down will raise the exposure up and down. Do take care however that you are dragging on the image itself; if you drag too close to the shutter button, you'll end up dragging between camera modes (Photo, Square, Pano, etc.). 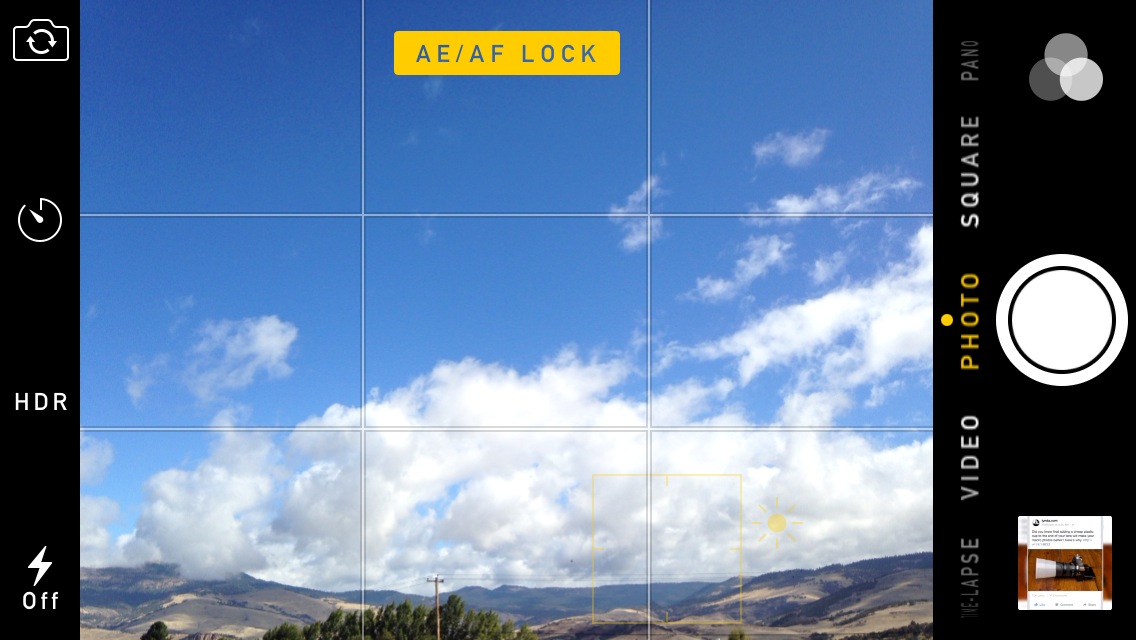 The exposure has been raised in this preview by simply dragging a finger up the screen. This example is a little too bright – the clouds are blown out – but it shows what you can do!

And that's all there is to it! Once you're happy with the exposure, just tap the shutter as you normally would.

It works in all modes except PANO

It's worth noting that this works in nearly every camera mode (TIME-LAPSE, VIDEO, PHOTO, and SQUARE), with the exception of PANO (panoramic). While you can lock the exposure and focus in panoramic mode, you can't adjust the exposure. My iPhone 5 doesn't have slow motion, so I can't tell you if it works for that mode or not, but I'd assume so since it's video.

I grew up in photography in the early days of auto-exposure with Nikon and Canon 35mm film cameras (early 1970’s). I became accustomed to adjusting the aperture ring until the exposure meter indicator inside the viewfinder centered itself perfection between + and -. Is there a general rule in photography dictating where an exposure should be? I know that when we tend towards overexposure that highlights blow out and when we lean towards underexposure, we lose detail in shadows. Other than those conditions, are there other factors guiding where an exposure should be set? Thank you for your input!

Right in the middle of the +/– is of course what the camera meter thinks is accurate. But with digital we have the benefit of being able to preview our under and over exposures, adjusting to taste. In digital it's usually advised to “expose to the right”, meaning you want the photo brighter rather than darker, as it's always better to darken the photo in post than it is to brighten it. However this really only applies to RAW photos. When it comes to iPhone photos (of course what this post is about), then just adjust the photo until it looks the way you want it to look on screen. That's all that matters.