Photos for OS X Is Installed…

It's time to see what Photos for OS X is all about. Yes the beta has been out for a while now, but I actually never installed it. I simply haven't had time to set up a separate Mac to install the beta (wasn't about to do this to my primary systems) so this is my first look.

When launching, should you migrate, or not?

The first thing you'll see after the initial tour is an option to choose an existing iPhoto or Aperture library to migrate. Should you, or shouldn't you? That's going to depend on your expectations.

Here's something you need to know if you decide to do it. You will still have access to your Aperture library, but any changes made there will not be reflected in Photos. It's basically two separate libraries at that point. So this could be a good opportunity to play in Photos with your existing Aperture library, then start over later when Photos has the features you want. But if you migrate a library, then start editing in Photos, and also continue editing in Aperture, you'll have discrepancy that'll probably never be solved.

Personally, to start I'm creating a new Photos library. This means that all I'll have is iCloud photos in there for now, which is fine to play with. I'll also import some legacy photos just to have a play. I have pretty much decided that my existing Aperture library, which I'm no longer working in, will eventually migrate to Photos (because Aperture won't run forever, and migrating to Photos will likely be way cleaner than migrating to Lightroom or Capture One will ever be), but for now I'm keeping it in Aperture because I need to access, edit and deliver photos that are already in there, and I can't do that job in Photos today.

(If you're wondering what I am currently working in, that's Lightroom. But don't take that as my final decision… I'm still learning it and watching other apps closely. I had to choose something and chose Lightroom. But that's beside the point here…)

Will I use Photos in my regular workflow? Most likely I'll delegate Photos to personal, family photos, while keeping my work in another pro level app. And at some point before Aperture truly dies, I'll migrate my legacy Aperture library to Photos to continue to access as needed.

As with any app, the first thing you should probably do is look at the Preferences.

It's a pretty small Preferences pane, but notice on the first tab the ​Metadata option. By default, “Include location information for published items” is off, for personal security reasons. This keeps you from accidentally revealing where your kids live to the entire world, for example. I'm aware and quite careful about this, and do like my geodata included in published photos, so I've turned mine on. 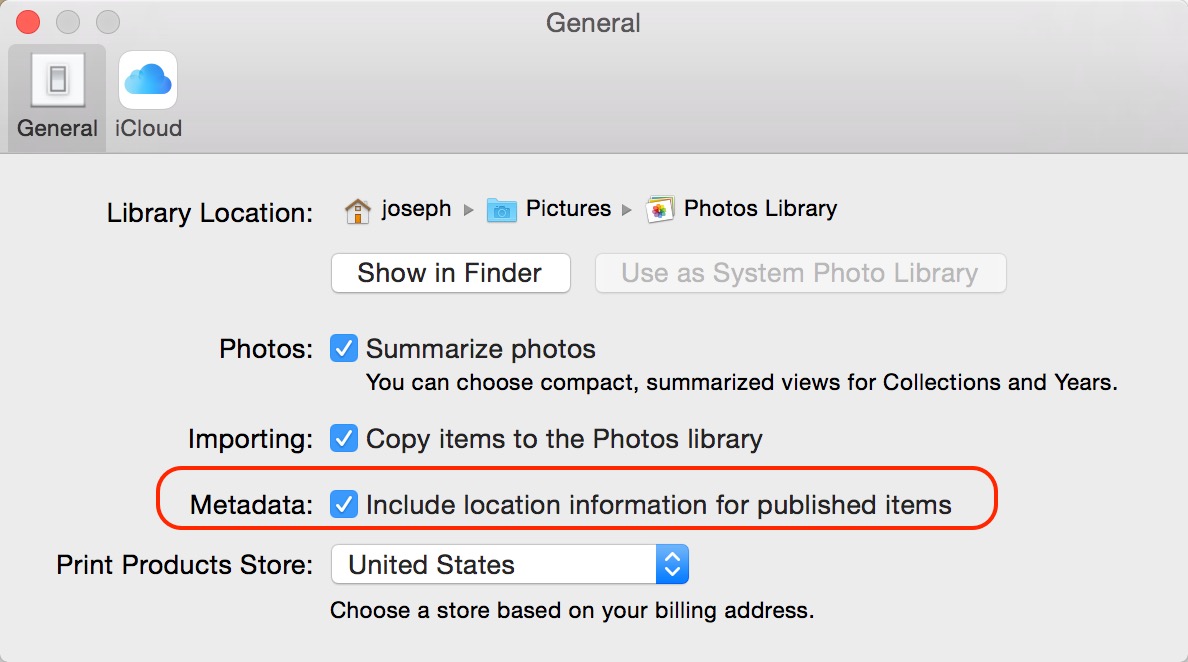 Location information is OFF by default, for security reasons, but I want mine on

The next tab, iCloud, is likely fine just as it's set. Since I didn't migrate a library the only photos in my library are coming from iCloud. You can track the progress of that here, and if it's clogging your internet connection, you can pause it for a day. However mine completed quite quickly. 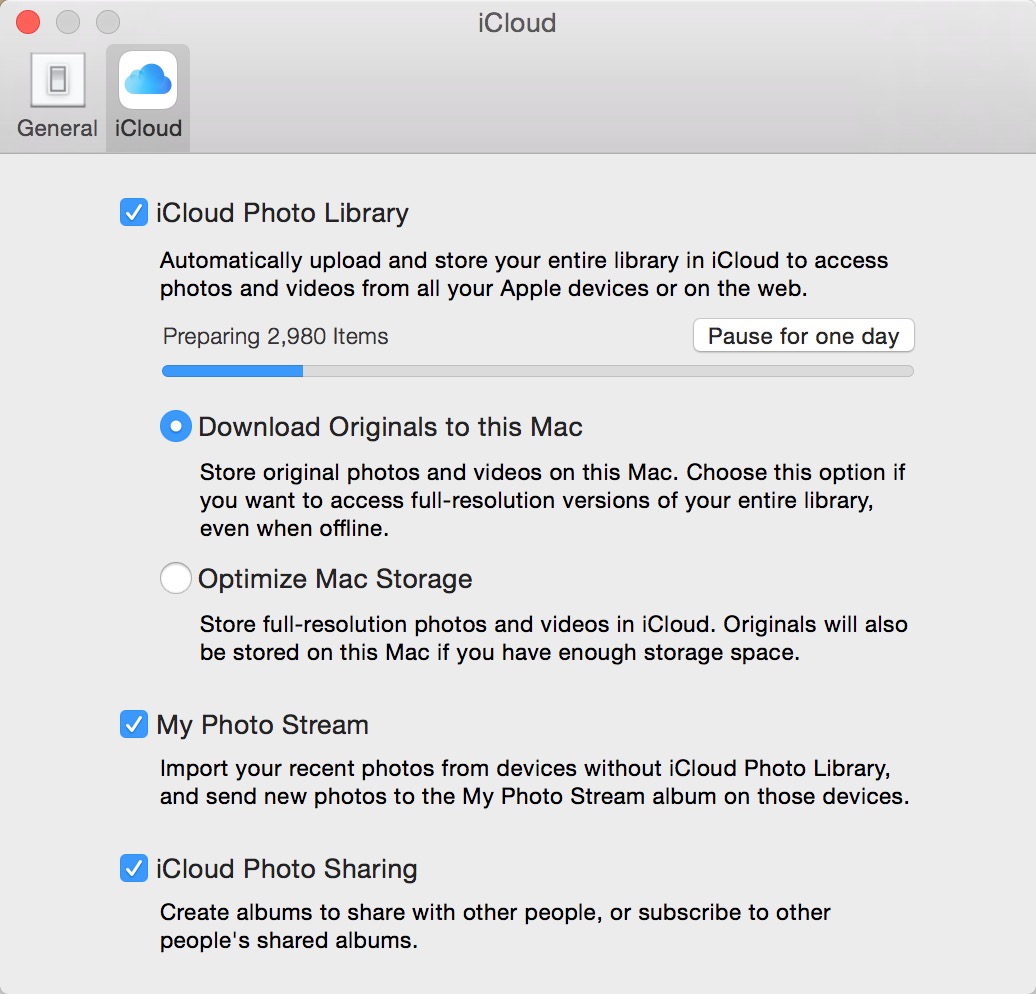 My Photos library is currently downloading all photos from iCloud Photos

That's all you'll find in preferences!

Just like in Aperture and iPhoto, if you want to switch libraries, hold down the option key on launch. You'll be presented with this dialog, which lets you choose existing Aperture libraries to migrate. This will be handy if you want to migrate one Aperture library just to experiment, but also have a separate “real” one that you start importing new photos into. 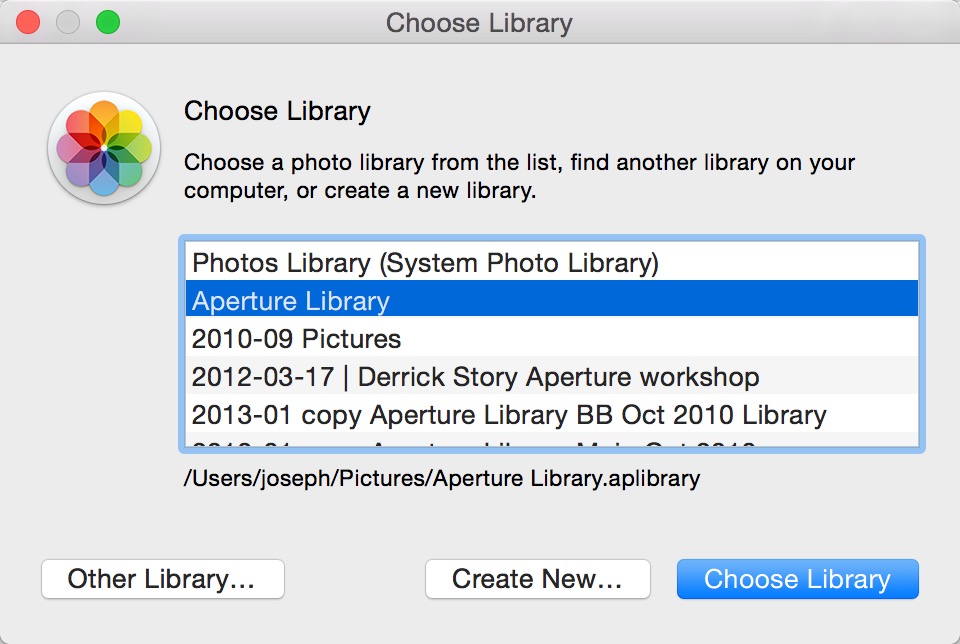 Later today, probably around 5pm PDT, I'll do a live “first look”. I am preparing an Aperture library to import for this so we can all see how things migrate over, and we'll discover the app together. Stay tuned for details and be sure to follow @PhotoAppsExpert on twitter for last minute notifications. If you can't make it live, I'll post it as a Live Training as soon as possible.

I too have Photos running and find it an improvement over iPhoto, which I don’t use. Sticking with Aperture for my serious work for now. But Photos shows some promise for some uses. The oddest thing i discovered – after being very happy to see that Photos leaves your originals where they are – is that you can then select your images, go up to the pull-down File / Consolidate and copy them directly into the Library. I know people who work this way, with a folder load of libraries in lieu of figuring out how to organize them themselves. Nice touch.

I do think the least they could have done is carry over from Aperture the spotting brush size adjusting from the mouse top.

In the end, wherever I wind up – possibly Photo Supreme – I can see using Photos similar to the way I use Preview now for a quick, good look-through batches of images for elimination purposes. Simply because it has a pleasant and handy interface.

I have had the Photos beta for 3 months, so I know exactly what it can and cannot do. That is why, immediately after updating my production machine to 10.10.3, my first act was to delete it. I don’t even use Photos on my iPad and iPhone. I’d delete it there too if I could. As a professional photographer and long time Aperture user, Photos is absolutely useless. I’m sticking with Aperture for the present time, but have already bought Capture One Pro and will take the next few months to learn before I migrate completely.

I now agree with you totally after watching the Webinar that Joseph did this evening. If you are a consumer who just takes candid shots for fun this program will be great for them. Personally I do not see professionals using this program. I may set it up to use for iPhone shots, but that is about all. Have kept both Aperture and Lightroom up to date over the years so now I will just use Lightroom full time along with OnOne Photo Suite 9 soon to be 9.5.

I’m not even a professional and I completely agree. Photos is clearly not intended for editing and photo management. It’s a social photo sharing application. I’ve be been using Aperture for many years and have spent considerable time trialing both LR and Capture One with a managed library containing 40k photos. LR was the obvious choice, until I tried C1. It’s not perfect, but for me it’s interface is intuitive and totally customizable. I’m quite enjoying it. Photos will be a cloud collection of my junk from iOS devices…. and that’s it.

Used the  Photos Beta for a while and found it lacking in many ways.. they really tried to do the minimalistic thing to this and in the process, they minimized it’s effectiveness for enthusiast photographers and catered only to iPhone shooters.

just converted my whole Aperture Library to become a referenced Library and will no longer rely on only one program.

For now, I will use this referenced Library in AfterShot Pro 2 because it is working well for my needs; if I see that in the future, Corel lags behind in supporting the app, I will purchase Capture One and use the same referenced Library there. Who knows, maybe by that time, Apple will have woken up and will have added extension support and advanced options that can be activated if a user wants rather than not having them at all.

What I suspected was confirmed after downloading and taking my own tour.  Quite honestly, there are iPhone apps for photography that are more useful than this.  I subscribed to the Lightroom+Photoshop package from Adobe almost a year ago to begin understanding how to use it alongside Aperture as a companion.  I evaluated both products (Aperture and Lightroom) when I started with my first Mac and starting with serious photography almost 5 years ago.  I never dreamed I’d be switching after having made that decision.  My only hope now is that Adobe evolves Lightroom on the DAM side of the product to at least come close to the capabilities of Aperture.  Time will tell…

So long, Aperture and no thanks, Apple for the free “Photos app”.  It’s simply not for me.

Greg, if you want the closest app to Aperture I strongly suggest you look at Capture One Pro. Like Aperture it has a steep learning curve, but it imports Aperture Libraries, either managed or referenced, including edits, and is highly customizable. You can even make it look much like Aperture. You can also do round-trips to NIK, PhotoOne and other editing software, not just Photoshop, and you’re not stuck with an endless subscription with an unpredictable and often unscrupulous developer.

I’ve switched to Lightroom from Aperture. I still have my Aperture Library but obviously the photos I have added to LR are not there. Is it possible to import to Photos from picture folders on my Mac? It seems the only option at the moment is to migrate from iPhoto/Aperture. I can import the extra photos (from LR) to iPhoto OK so I could use that route but it would be good to import straight to Photos. I plan to keep LR but could use Photos for simple edits and sharing with iPad/iPhone.

Many people are about to make a decision now: stay with Aperture and wait, move to Photos, choose other app, etc. I can find first reviews, thoughts and evaluations. No on is mentioning about one feature, which was quite important to me as Aperture long time user: compatibility with Apple TV. It is super easy: I create folder, project or smart folder, one click in iTunes to share photos from Aperture on Apple TV – done, I can quickly see it on my screen (or TV) organized like I did it Aperture.. I guess Photos will do the same but what about other apps like Capture One Pro? Shell we say goodbye to such a nice feature?