Today is a big day for OS X and Photos users. Not only do we get OS X El Capitan, we also gain an update to OS X Photos. Not a very big update, mind you, but it does include one very important feature — support for Extensions.

Macphun is the first out of the gate with apps that support the Extensions architecture. Here's what you can expect to see. First, when you edit a picture in Photos, you'll now see a new little widget which will look familiar to iOS users…

Check out the familiar “More” button now found in Photos for OS X!

Select that, and you'll be presented with the Extensions pane in System Preferences, where you can enable whatever apps you have installed: 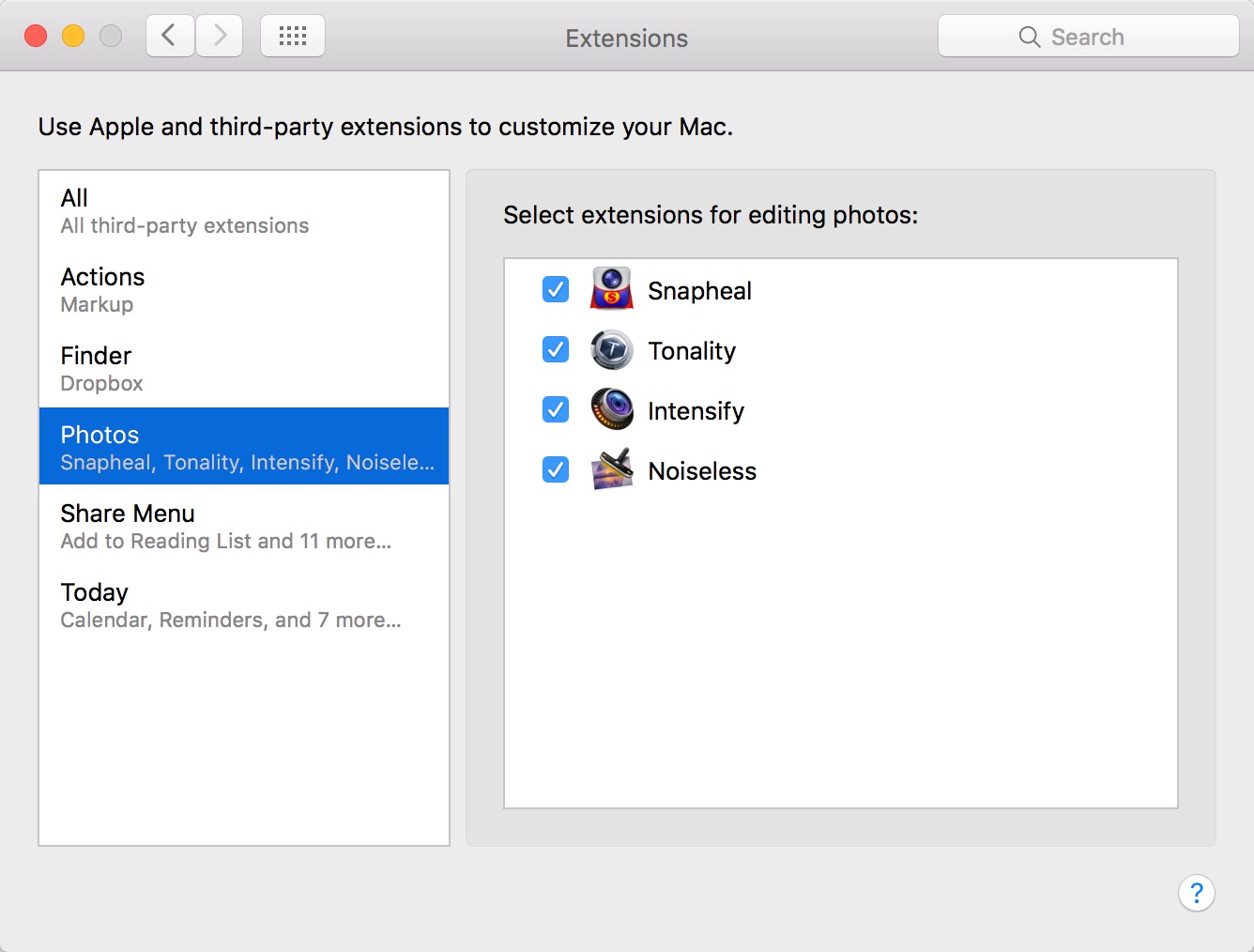 Once enabled, back in Photos, here's what you'll now see! 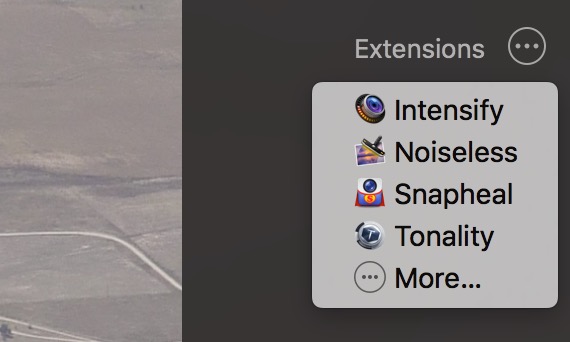 If you already have these apps, just run Software Update to get the latest versions (Snapheal, Tonality, Intensify and Noiseless are the ones that have Extensions support). If you don't yet have them, check each one out from the widget below. Also, be sure to read yesterday's post on the new Macphun Creative Kit 2016 — that may affect your decision on what versions to buy!

Later today I'll be digging into these apps to show off what you can now do from Photos. Cool!

I am looking very much forward to these first apps that support Photos extensions, and i hope that they can cover my needs for some small photo editing, with Photos as my library

I’m definitely biased (am with Macphun), but I think you’ll be pleasantly surprised. Fast and easy to use with lots of creative choices and ability to “correct” photos as well.

Having the MacPhun apps will give Photos for OS X pro level editing capability!!!

They were on sale for 70% off yesterday so i bought them.  I got Intensify, Tonality and Noiseless. I didn’t get Snapheal because I have an impression that Serif will bring Affinity Photo inpaint brush to extension sometimes in the future. plus, I don’t really need to delete stuff so i can wait.

However, these tools are very much oriented to presets with the intention that users use them as starting points.  Selection and masking tools are very limited. There is a brush tool but no edge detection.

Hi - I’m w/ Macphun. Thanks for your business - I’m sure you’re going to love the apps!

Regarding selective editing, we take a different approach in most of the tools by letting you apply effects based on tonal range (e.g. highlights, midtones and shadows). For a lot of photographers, this global approach is a good fast way to get the enhancements done w/o complicated selections, brushes, masking, etc.  I used to use Nik’s Viveza a lot to do selective editing, but find it totally cumbersome now for 95% of my editing.

I agree 95% of the time, it small global adjustments since we’re mostly about shooting photos and not editing, i think that local editing is cumbersome because it takes time away from shooting.

On rare occasion (maybe we’re out of our minds or something), we do need local editing. I find that Viveza is pretty quick in some situation and really slow in other, but good thing will have many tools for the situations!!!

I really like MacPhun’s approach of selection using tone ranges and when combined with the brush will allow the user to do highly selective editing.  Is this an inappropriate forum to make feature requests or suggestions? I really like editing based on tone range, can we have more?

1) I find the contract control interesting in that they are split as highlight, mid and shadow. I would like to ask, in addition to contrast, can we add brightness, desaturation/saturation, tone and the ability to add noise?

2) Some more on tone ranges. Could we have the able to adjust contrast, brightness, saturation, tone and brightness based luminosity, color, saturation and granularity (frequency separation). This would be extremely power when combined with the existing brush or gradient selection!!!

3) Can we also have the ability to edit the contrast, brightness, saturation, tone, grain level and tone based on temperature? The reason i’m asking for this is i often have indoor photos with sky light coming in from the windows mixed with indoor lighting which results in parts of the photo being really cold while other parts being really warm. Thanks!!!

Thank you and your whole team for these tools!!!! I really appreciate it!!!

Reply from PhotoJoseph
on October 2, 2015 - 1:23pm
Great feedback! There’s actually a forum here for Macphun (click Support then Forums in the menu bar), and I know they monitor it. If you copy/paste your list there, they will see it!

Really great feedback - thanks!  Will pass all of this along to the Dev team for future releases.  I’ve been banging the drum for edge-aware brushes for some time. ;-)

Re: #3 - do you ever use brackets/HDR for handling those indoor photos?

Thanks. i’ll hit Macphun forum in the future.

Yes, i have used HDR. Can have latitude beyond the human eye. It’s really neat. i use an app called Luminance HDR. Really nice stuff. http://qtpfsgui.sourceforge.net

I’m not particularly pleased… They decided to update their non-Pro apps with extensions, but not their Pro series of apps.

Reply from PhotoJoseph
on October 1, 2015 - 12:21am
Check the previous post about the Creative Kit. There’s a big upgrade coming with more features but yeah, surprisingly it’ll not include Extensions support right away. Definitely a bummer.

Joseph - I know the engineers are trying to get the Photos support in by the mid-month Creative Kit release. I’ll keep y’all apprised.

Don’t be disappointed, it’s not worth it. It’s not big deal. You too can have all these functionalities in Aperture!!!!! The Creative Kit (Pro version, not App Store version) apps can be use as plugins for Aperture. Extensions are basically a more restrictive version of plugins.  Photos edits with native adjustments are non-destructive, but adjustments using extensions are baked in. you cannot go back to change them but you can always revert to the original. This works just like plug-ins in Aperture. Extensions are essentially the same as plug-ins with minor differences.

I haven’t gotten the MacPhun extension to work. When i try to edit with one of them, the Photos windows will black out so I will have to talk to MacPhun about this issue to get it resolved.

Affinity Photo will have the inpaint brush (basically like SnapHeal).

I already have Affinity Photo i use for compositing/design. For users of DxO OpticsPro, this is an awesome option for them because it’s pretty great.

Good comment!  The Creative Kit contains pro versions of all our software. They run as standalones today and plug-in to PS, LR and Aperture today. We’re working hard to update the apps in Creative Kit w/ Photos Extensions support and trying to get that into the mid-October release. Regardless, it will be very soon and free to all Creative Kit owners.

Thanks, I’ll definitely will hit up on support!!

From this dialog string, I’ve become more confused. As a current Aperture user, I understand that Creative Suite 2016 works as a plug-in (Krakatoa) now. I’m not planning on leaving Aperture soon unless it becomes none supported by Apple in future OS updates (years?). If that happens I assume I can use the same CS2016 software as “stand alone” versions with Photos. With the extension version of CS2016 coming out some point this year, it offers another path, but uses destructive edits with jpegs, but NOT with TIFFs. Lots to consider, but great to see the Photos support.

Hi John - the short answer is “yes”, you’ll be able to use the same CK2016 software in both Aperture and in Photos.

It turns out the engineers have been burning the midnight oil and I’m told CK2016 will have extensions support for Noiseless, Tonality, Intensify and Snapheal right off the bat.

If I buy the Pro Creative Kit for $89.99 can I install it in both Aperture and Photos? Can I install it on both my iMac and my MacBook Air since I only use Photos on the latter? Can I have it on both Aperture and Photos on my iMac? Since El Capitan will still run Aperture I’m going to stay with it for now since we have some external storage issues to sort out and now there’s no hurry, but I’d like to have those tools.

Hi Reynard - yes, you can install Creative Kit 2016 in both Aperture and Photos, AND on both your iMac and MBA. No problem.

One suggestion and clarification: you want to pre-order CK2016 right now to lock in the $89.99 price. You will immediately receive the “old” Creative Kit but note this only works in your case for Aperture but not Photos.