The latest version of the Macphun Creative Kit — including Tonality, Intensify, Focus, Noiseless, Snapheal and FX Photo Studio — is now available. And the best news? If you already own the 2015 version, this is a FREE upgrade!

Plus if you didn't already hear… Macphun confirmed that they did in fact get Photos Extensions functionality into this version at release. No waiting for that feature as they original said!

NOTE: For OS X to recognize the Macphun Creative Kit apps as extensions for Photos, you have to first launch each app. This is only because they were not downloaded from the Mac App Store (MAS). Apps downloaded from the MAS appear to self-register as Extensions, however if an app is installed some other way, the app must be launched for the OS to know that it has an extension hook. Just launch each app once, then you can activate them from within Photos.

If you are a registered user, by now you've probably received an email inviting you to download the new version, along with a unique activation code.

But if you don't already have it, head over to the Macphun Creative Kit page to learn what it's all about! 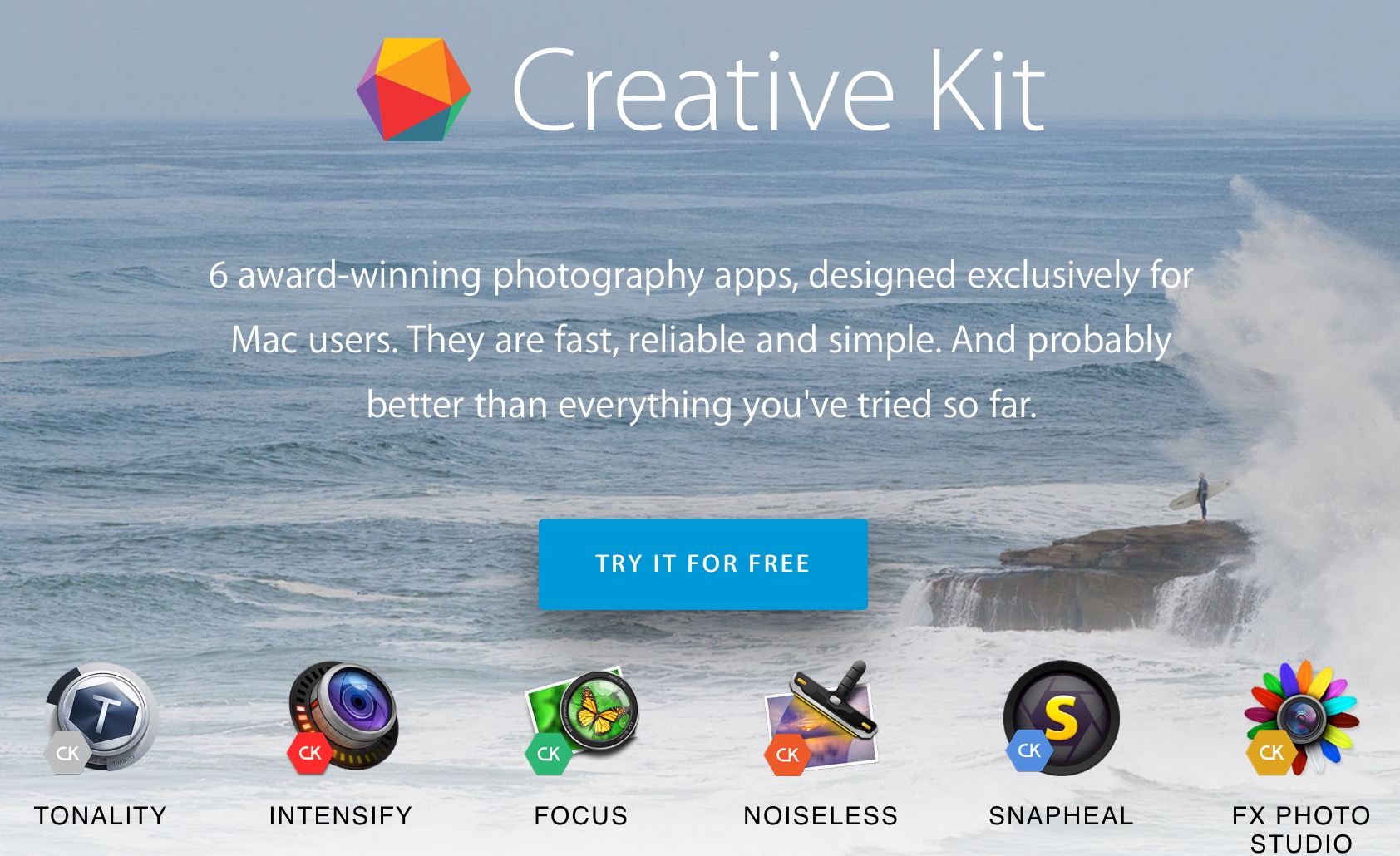 I received all extensions except for Focus CK… Support said it would be fixed later part of October.

I didn’t receive the notification email of the CK version. But I downloaded the demo and used my serial number from the previous version to enable it successfully.

I found that the Macphun extensions don’t show up in the System Preferences->Extensions->Photos area until the individual apps are run for the first time. Then restart System Preferences to get them to show up.

Hi Thomas - thanks for clarifying that - you will need to run the CK apps first in order to “register” them as an extension. I need to confirm w/ engineering WHY that is the case - I’m sure if we could have forced them into System Prefs > Extensions, we would have.

PS: We were able to get FX Photo Studio as an extension quicker than expected; crossing fingers that Focus CK will be converted quickly as well. :)

been reading some contradicting info about extensions and was hoping you could help clear the confusion… do Photos extensions use actual RAW file from OSX Photos to do the editing magic or does it use the embedded JPEG?

I ask this because when using Snapheal as an extension in Photos, I see jpg in the title bar after I finish editing in the extension…

Then, if I hit revert to original, it states RAW again. (see screenshots attached)

please clarify if this is a limitation of Apple and Photos or is it a decision made by Macphun devs. 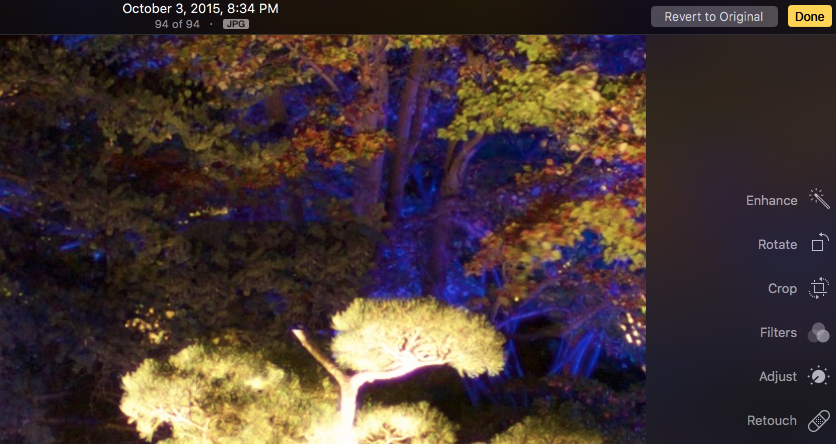 Hi - thanks for the question.  Photos requires us to give back a JPG file.  Most photo editing programs (maybe all?) that read in and edit a RAW file will pass a TIFF or JPG back to the host after editing.

Hi, Thanks for the clarification Kevin.. I will use Macphun app as standalone from now on.. at least I can export to uncompressed TIFF once edited..

A Tiff export option should really be added to Photos app by Apple.

On a side note, next Macphun app could be a Photos replacement solution for the Prosumers who don’t want to give money to Adobe every month and who have lost faith in Apple for their advanced Photography needs…

Have all the bells and whistles we need like star ratings, colour labels, flags, and if possible, a companion iPad app to browse and rate on local network with no cloud attachments (like Photosmith app does for Lightroom)… of course RAW editing support (use CoreImage that Apple already provides)… and of course all your stellar existing apps could hook into that new app.. maybe call it Macphun DarkRoom (if not already used by another app).. I’m sure this would fit the new Creative Kit masterfully.

Those were my 2 cents.

Great ideas!  I’ll pass it along and advocate.

And… to your point about keeping up the App development. Just wait until you see what we have cooking next. “Truly Unruly” (as my friend Eric Zocher would say).

Reply from PhotoJoseph
on October 21, 2015 - 8:56am
Kevin, this is a great workflow question. Can you confirm that you are taking the RAW file from Photos and decoding it yourself? If so does that apply to all Macphun extensions? Of course you have to send back a TIF or JPG, as once decoded it’s no longer RAW, but if you’re taking in the RAW that’s good to know. And as another comment noted, if you make any changes to the image first in Photos then it will send a JPEG to the extension regardless.

And don’t make any adjustments in Photos first as this will cause Photos to for sure send a JPG to the extension as that’s the only way it can send it - baked in to a JPG.

any editing need will be met with ”show referenced file in Finder” and then “open-in” anything but Photos.. lol

While I’m still using Lr as my main organization and editing program, Extensions really makes Photos rock.  And the fact that editing using Extensions is non-distructable - even better.

It has been said that the Macphun Apps have to pass either a TIFF or JPG back to Photos. It would be nice to have the choice or to default to a TIFF which retains much more information?  Personally, I cannot see why Photos won’t allow an edited RAW file (raw and sidecar) to be one of the options, why should Apple make the decision for us! Cannot see me moving away from LR for a long time yet.

I second the sidecar + RAW approach… if they would have used this mindset from the start, RAW edits would have been made more simpler to translate even on an iPad.. essentially allowing the iPAd to modify strings in the sidecar and when syncing back to Mac, it would apply all the edits to the Mac app aswell..

Also they really should add the option to send uncompressed TIFF to extensions instead of JPEG to get the most detail.

Hi folks - thanks for the discussion and recommendations. I’ve passed all of this to the CTO and lead engineers to mull over. What you guys are saying sounds entirely reasonable, and worth seeing if the Photos extensions API let’s us do it.

Thanks Kevin, appreciated and fingers crossed :-)

If Apple are placing such a restriction it means Apple Photos is a complete waste of drive space for those who desire to take their photography to the next level.

OK, thanks to Dima (our co-founder and CTO) for answering my question on a Saturday…

He confirmed what I suspected:  Today, we are limited to what Apple gives developers in their API for Photos editing extensions.  Another example beyond the ones you guys suggested: multiple image editing, say for HDR work. ;)

We’ll of course lobby for more expanded possibilities for Photos, but be sure to make your voices heard as well. I’m sure Joseph has a direct pipeline into Apple. ;)

Which shows clearly that Apple are not supporting the upper end of the photography market, those that are more than just snappers, and therefore Photos is no substitute for Aperture. Even more reason then for Macphun to develop its own DAM browser that ties in with the various apps.

I’m not sure that one of the basic questions here has been answered. Do Photos extensions get handed a RAW image or a JPG? They might be forced to hand back a JPG, but what are they given?