As someone who's really been enjoying the Priime on iOS [free with in-app purchases] ever since I had them as a guest on the TWiP Apps podcast, I was very excited to get my hands on the new Priime Styles for Mac [$29.99, Mac App Store].

Essentially Priime Styles is a series of preset styles designed by photographers, for photographers. These go beyond basic presets, and each style is truly unique. They definitely aren't universal; some are designed for landscapes for example, which might look horrible on a portrait, but that's the point… lots of styles designed for lots of different types of photography. The controls you have are limited to fading back the intensity of the style; you can't actually tweak the style itself.

On first launch, you're greeted with a setup screen: 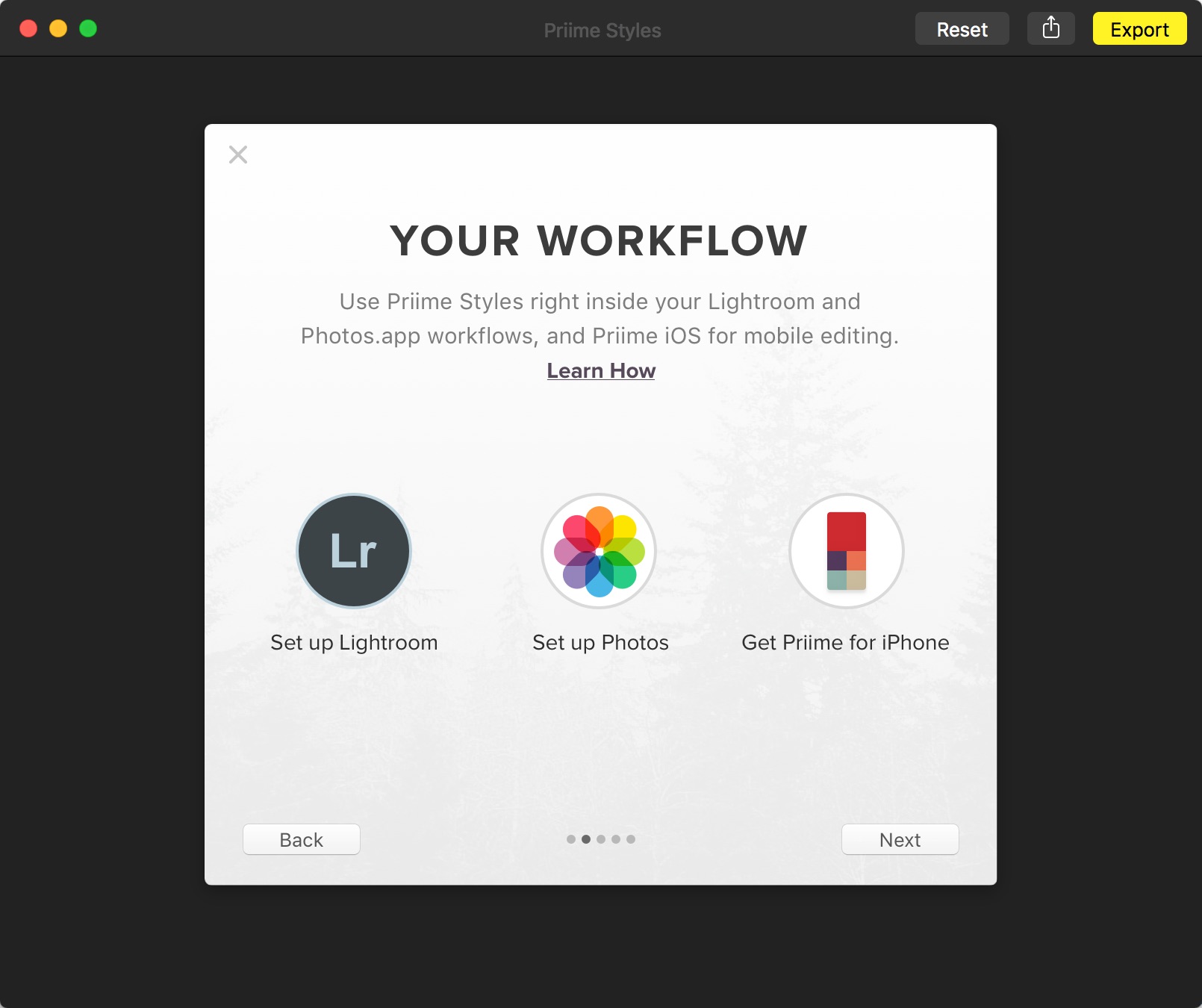 If you miss it, you can click on the icons which will bring you to a setup guide webpage. It's pretty straight forward and for Lightroom, it recommends setting up as an external editor (which doesn't replace the Photoshop option, FYI). Once setup, from Lightroom, when you right-click on an image, you'll see this:

Once in Priime, it's just a case of playing with different styles to find something you like. There are categories such as Bright or Faded, Landscape or Architecture, and so-on. Or you can load them by author, if you know you like the style of a particular photographer.

Most exciting though is the Explore screen, which, similar to VSCOcam, will show you all the filters applied to your image at once. 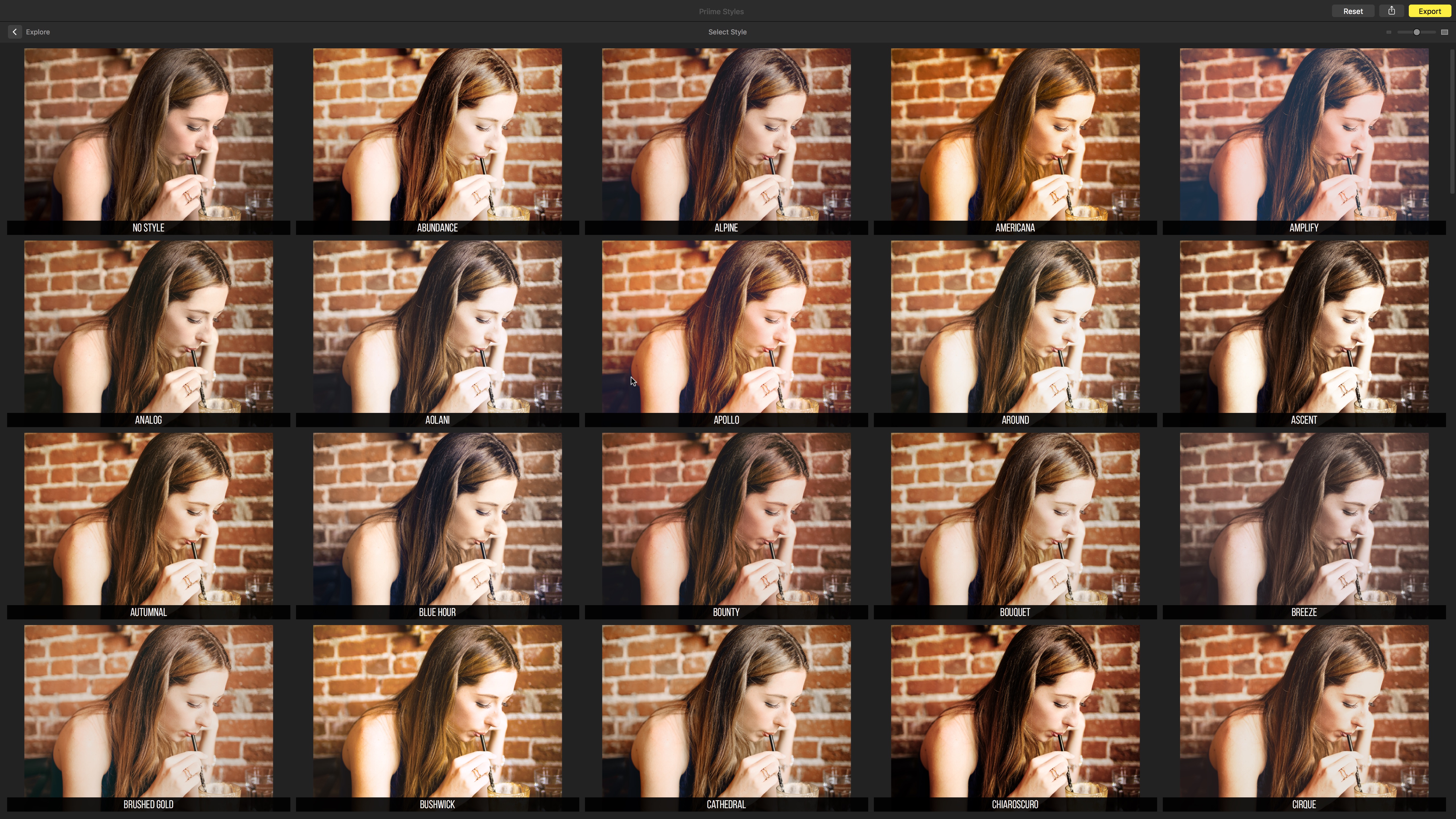 The Explore button shows you all the styles applied at once, making it easy to browse them all

Something I really appreciate here is that there are keyboard shortcuts for fading the intensity up and down, making it quick to play. 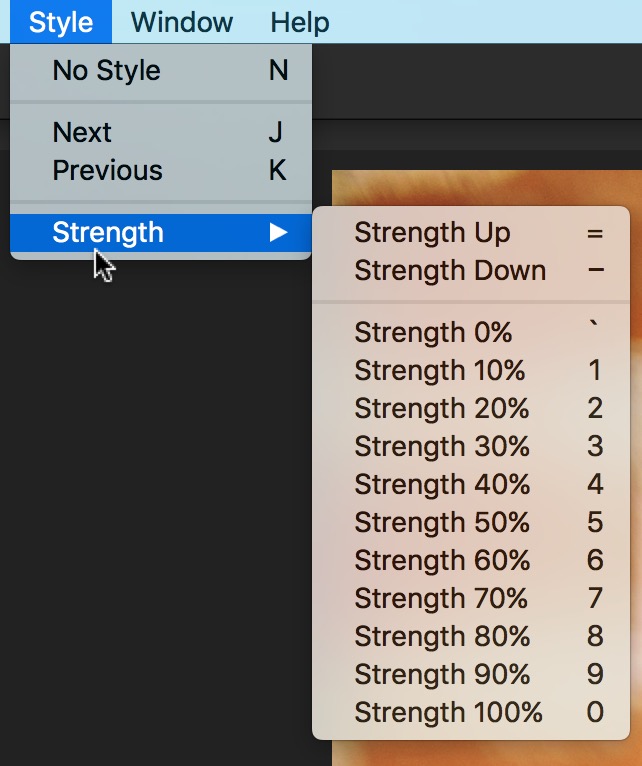 Keyboard shortcuts for adjusting the strength of the style are handy

Finally, you can even send multiple images to Priime Styles at once from Lightroom or the Finder. 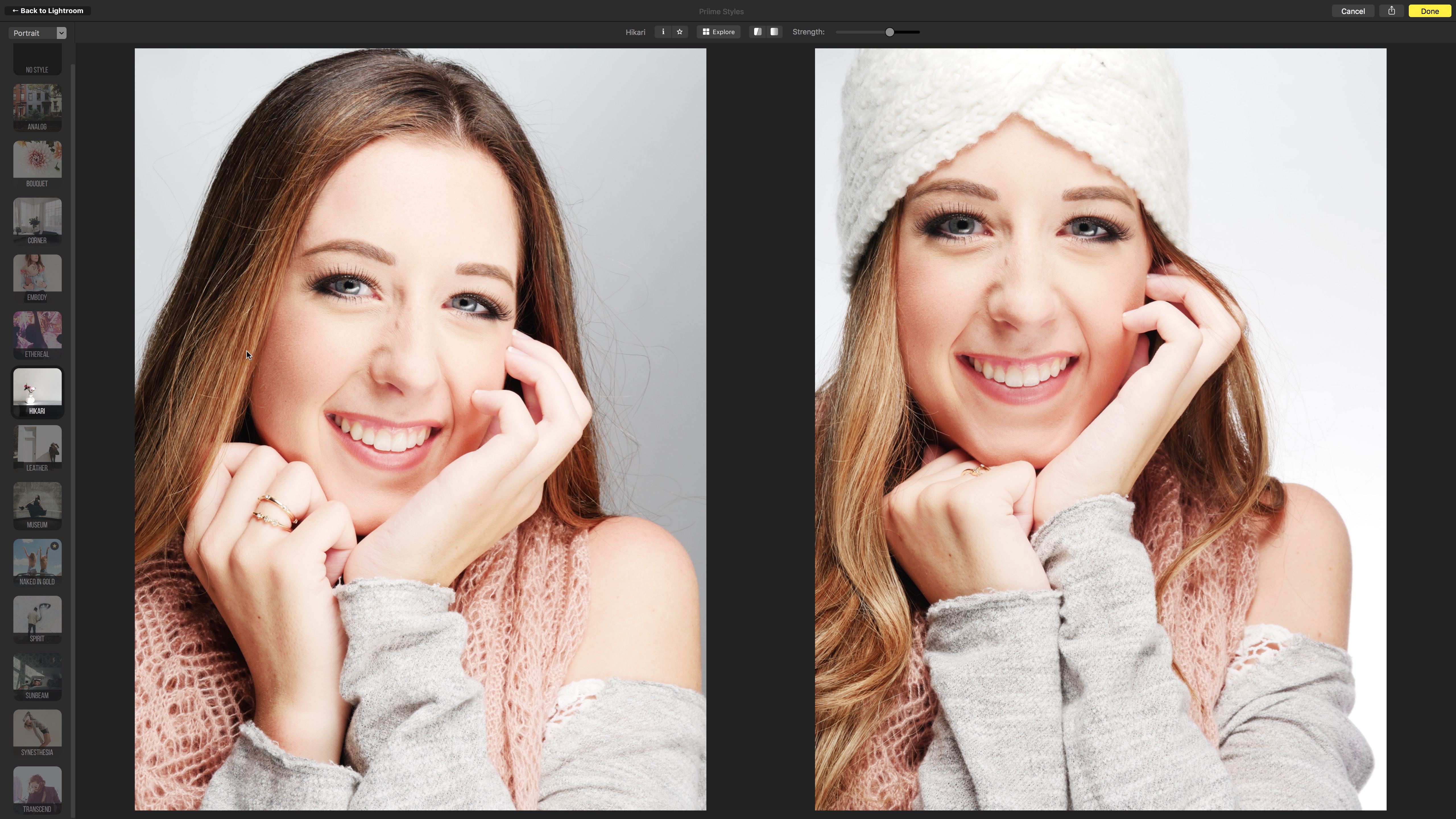 Photos users however are limited to sending a single image at a time; a limitation of the Photos plugin architecture, since you have to enter the Edit mode before you can access third party Extensions. 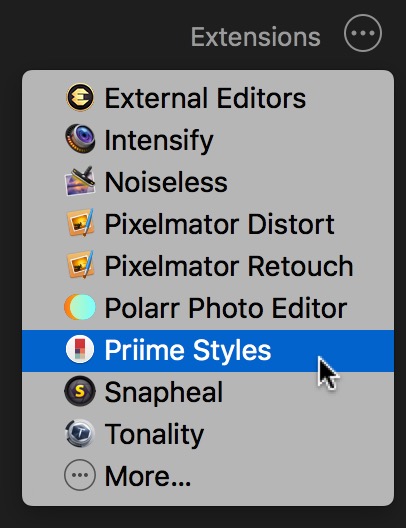 You can access Priime Styles from Photos, but only for one image at a time

There are some notable difference however between the Mac and iOS versions.

First of all, there are no adjustments here. No highlights and shadows, no warmth or tint, no cropping, etc. Priime clearly expects you to do these adjustments before sending them here (or after, once back in your host app), which really shows that this is designed as an extension, not as a stand-alone editor. Which is fine, except that there are times where you may want to scale back the brightness for example on an image only because of the way a style has treated it. Since however you are working with TIF files when sending from Lightroom, it's reasonable to say the you can make those adjustments back in Lightroom afterwards. Photos users though will be limited to working with a JPEG generated from their original image, so I'd recommend going back to Photos, making the adjustment, then sending to Priime Styles again after.

More disappointingly though, there is no Suggested styles feature in Priime Styles for Mac, like there is in Priime for iOS. This is to me one of my favorite features, so I'm quite disappointed to see this missing. Perhaps it's a feature that's coming, and I'll have to ask them about this. On iOS, your photo is analyzed and a series of styles are suggested that might work with your image — and usually, one of those suggestions is perfect! So again, I'm sad to see this missing.

Finally, on iOS, the app is free and you can purchase additional styles. On the Mac, the app is $29.99 and includes all the styles. I don't know yet how they'll handle adding additional styles to the Mac version; presumably these will be included for free — which of course would be great.

Other than that, I'm very excited to see it on the Mac, and since I've found that I really love the styles on iOS, I look forward to working with it more here!

Just a question out of curiosity.. Why do I see many apps that are on iOS and Mac which have completely different price points?..

I don’t mind the pricing as it is a one time fee for most and no subscription is always winner for the customer! Just wanted to know if there was a technical reason for the difference.

Is it because Apple charges more to a developer that uploads a Mac app to their store? or is it because the developer foresees less sales in the Mac version and as such ups the price to make up for less foreseeable sales?.. maybe another reason?.. If any developer can chime in, I am just asking for curiosity reasons and not because I am complaining for the pricing.

I can only speculate, but I'd guess that on iOS, there's a mechanism to add sales through in-app purchases, whereas on the Mac apps, there isn't. You have to give free upgrades for life or release a completely different version under a different name (same for both Mac and iOS), but at least in iOS  you can offer add-ons to boost revenue.

That'd be my guess at least.

that would make sense.. App store will need an overhaul to allow developers to easily set upgrade pricing and in app purchases on both mac and ios.

here’s hoping that Sierra’S succesor will provide this..