Are You Ready To Dump Photoshop… for an App?

This article originally appeared on Adobe Spark, and is reposted here in entirety with permission. Christopher Briscoe is a dear friend, superb photographer and amazing human being. We had the very first “Conversation” together, which kicked off the series, several months ago. Once you've read this post, I encourage you to go watch that video, here.
-Joseph 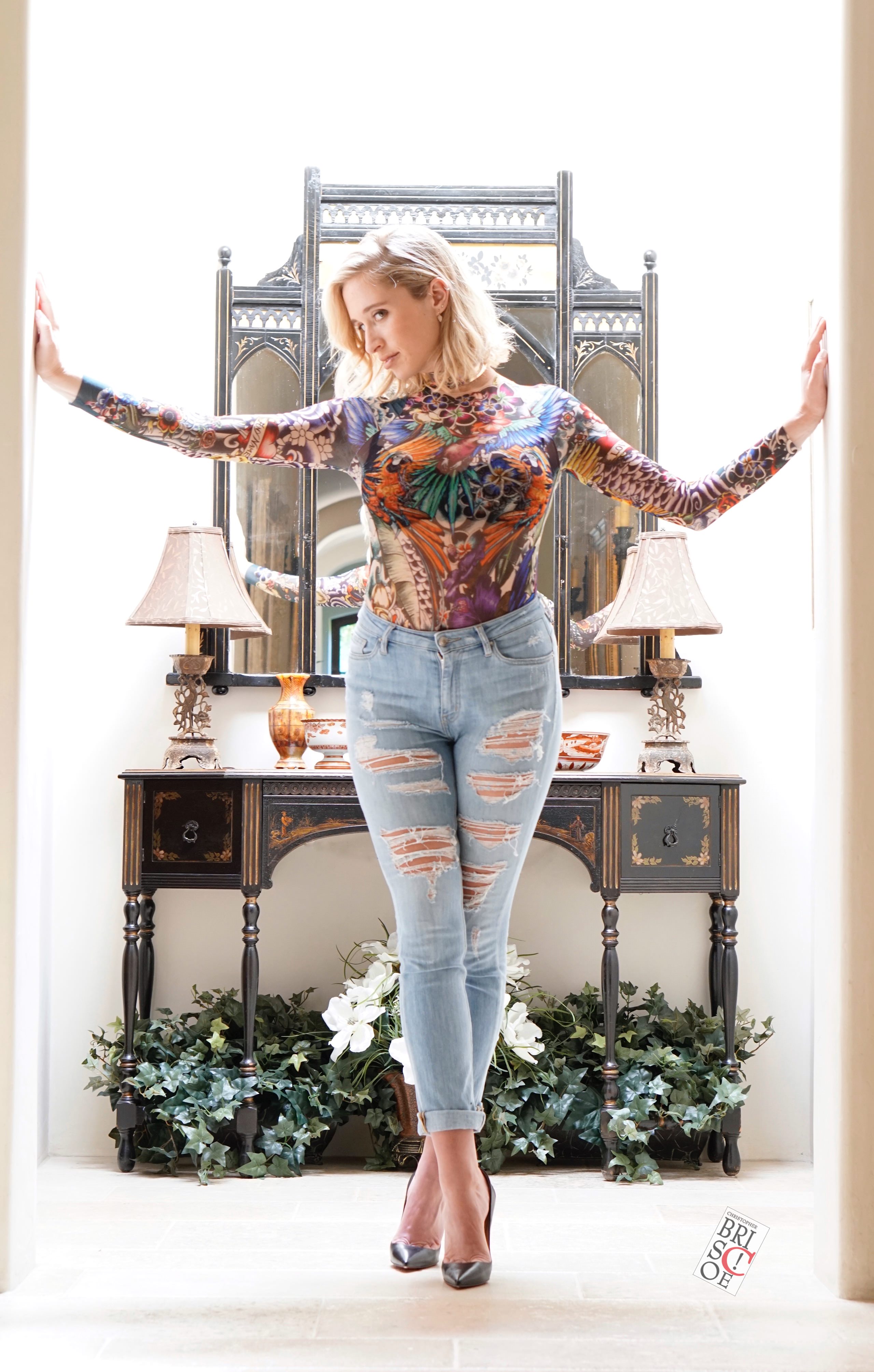 A few months ago, my son and I enjoyed the adventure of a lifetime, riding our bicycles from Santa Monica to Chicago. I've been a professional photographer for more than three decades and knew that the images I'd snap along the way would be very important to me. The thought of leaving my laptop at home was a bit unnerving. I live and breathe Photoshop and was not excited to be without it for 2 months, but weight and space on the bike was an important consideration. I reluctantly decided to leave my Macbook Air behind and instead edit my images on my new iPad Pro. It weighs less than a pound. 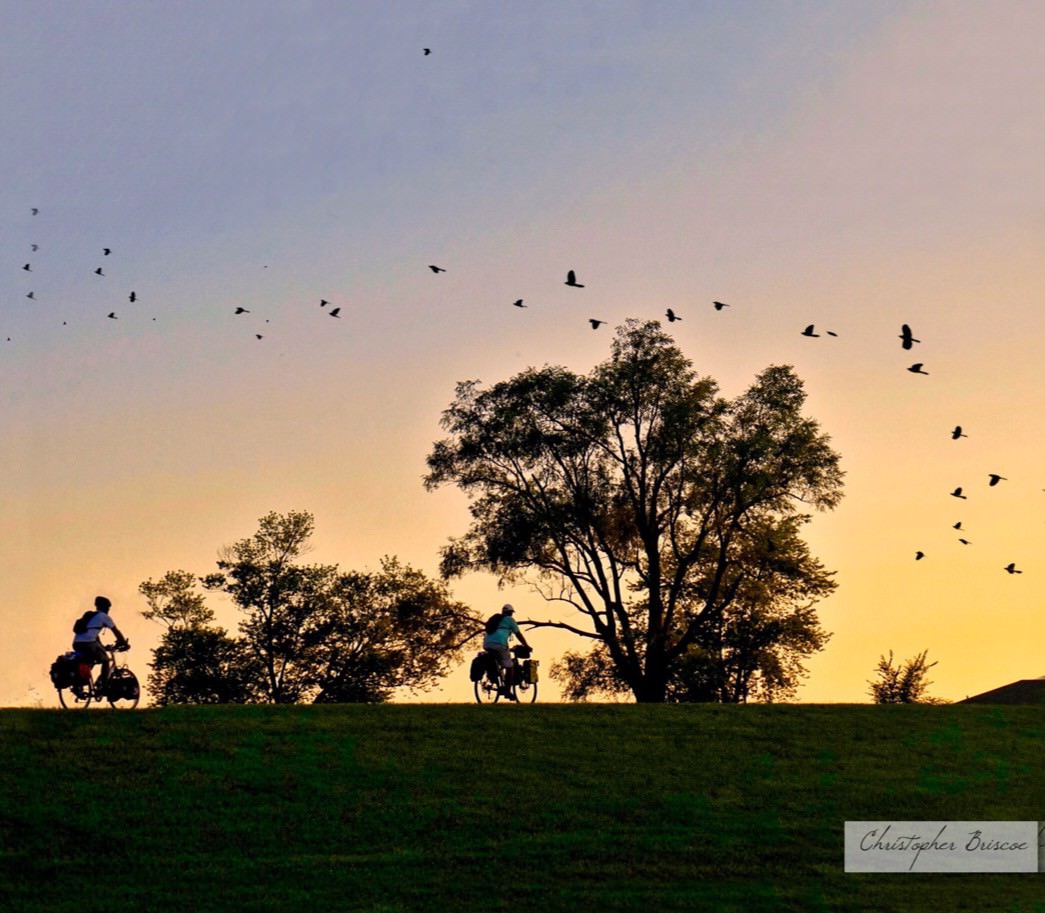 All of this was created on my iPad. Two images were merged together, the sunset enhanced and then the addition of the birds. — Photo © Christopher Briscoe

During the trip, Snapseed, a free photo app from Google, became my daily editing tool. By the end of the nearly 3,000 mile journey, I didn't miss Photoshop at all. Being able to zoom into an image on the screen and tweak my photos with a variety of free apps soon became fun. When I needed to get in really close, nearly down to the pixel level, I'd use my Apple Pencil on the glass screen that had a resolution of 2048×1536!

Yesterday, I did a 2 day fashion shoot in Montecito. When Kelsey Douglas, my model was changing outfits and the stylists were working on hair and makeup, I'd load some of the images onto my iPad. As I was waiting, I began to do some retouching, mainly using Snapseed's new Face tool. It was almost too easy. Smoothing the skin, brightening and sharpening the eyes - add a little vignetting and bingo! 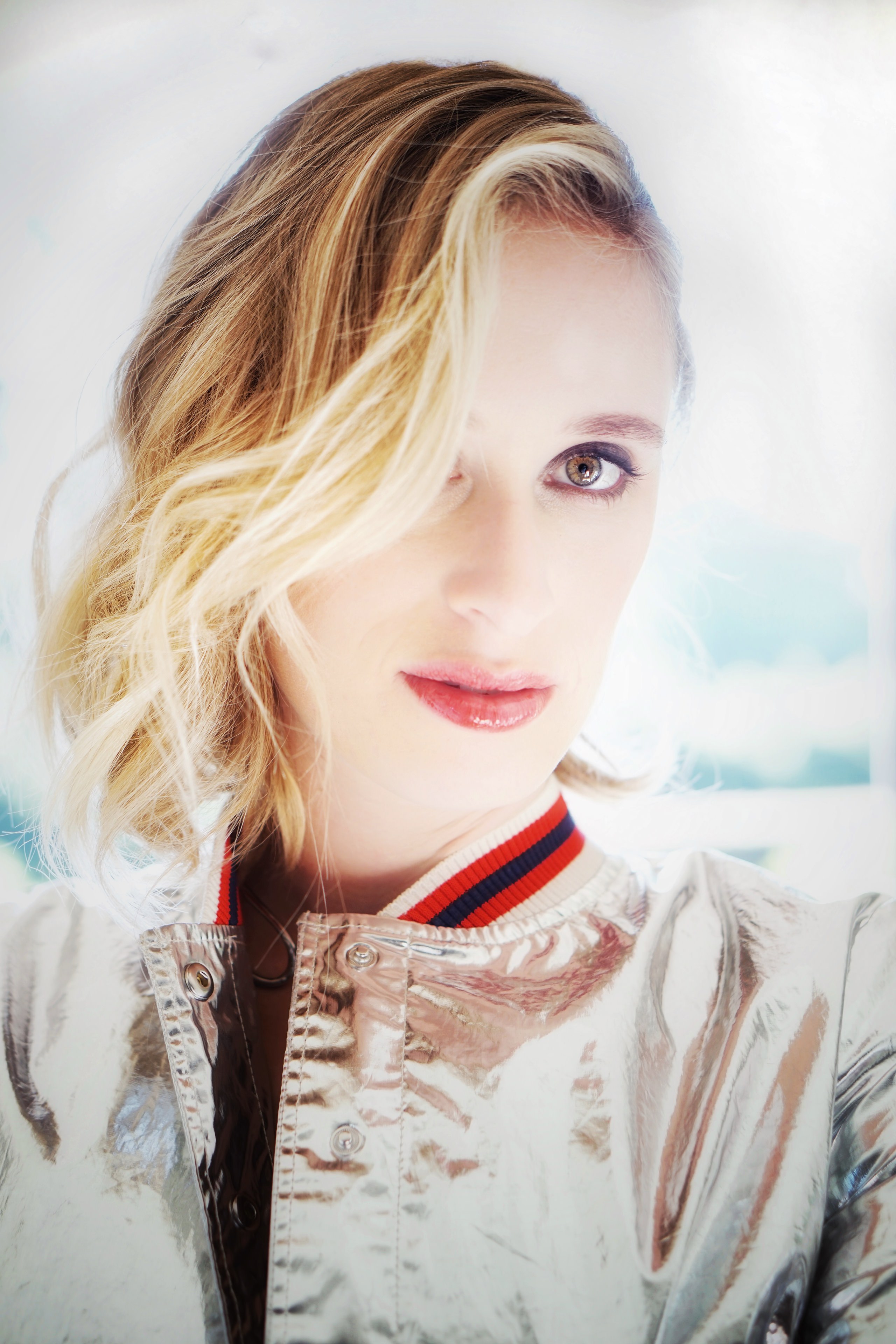 Next I looked at the brand new Face Liquify tool in the Photoshop Fix app. Are you kidding?! It will narrow the face, enhance the eyes, crank up the smile, enlarge the eyes - even add more space between them to achieve that ideal eyes-to-jawline ratio. My model was great just as she is, so I didn't need to go far down that path, but just knowing what tools I had at hand was jaw-dropping. (I think there's a an app pun there somewhere.)

When my beautiful model was ready, I knew I had something that she and the team would love. At first, I hesitated, not wanting to diminish the value of what I was doing by offering a version of the final product too soon. I knew that if the client had to wait a few days, they'd assume that I'd spent many hours painstaking retouching the images, pixel by pixel, one skin pore at a time. But, I was so floored by the results, I thought, “the hell with it. I'm going to show them what I'm getting.” 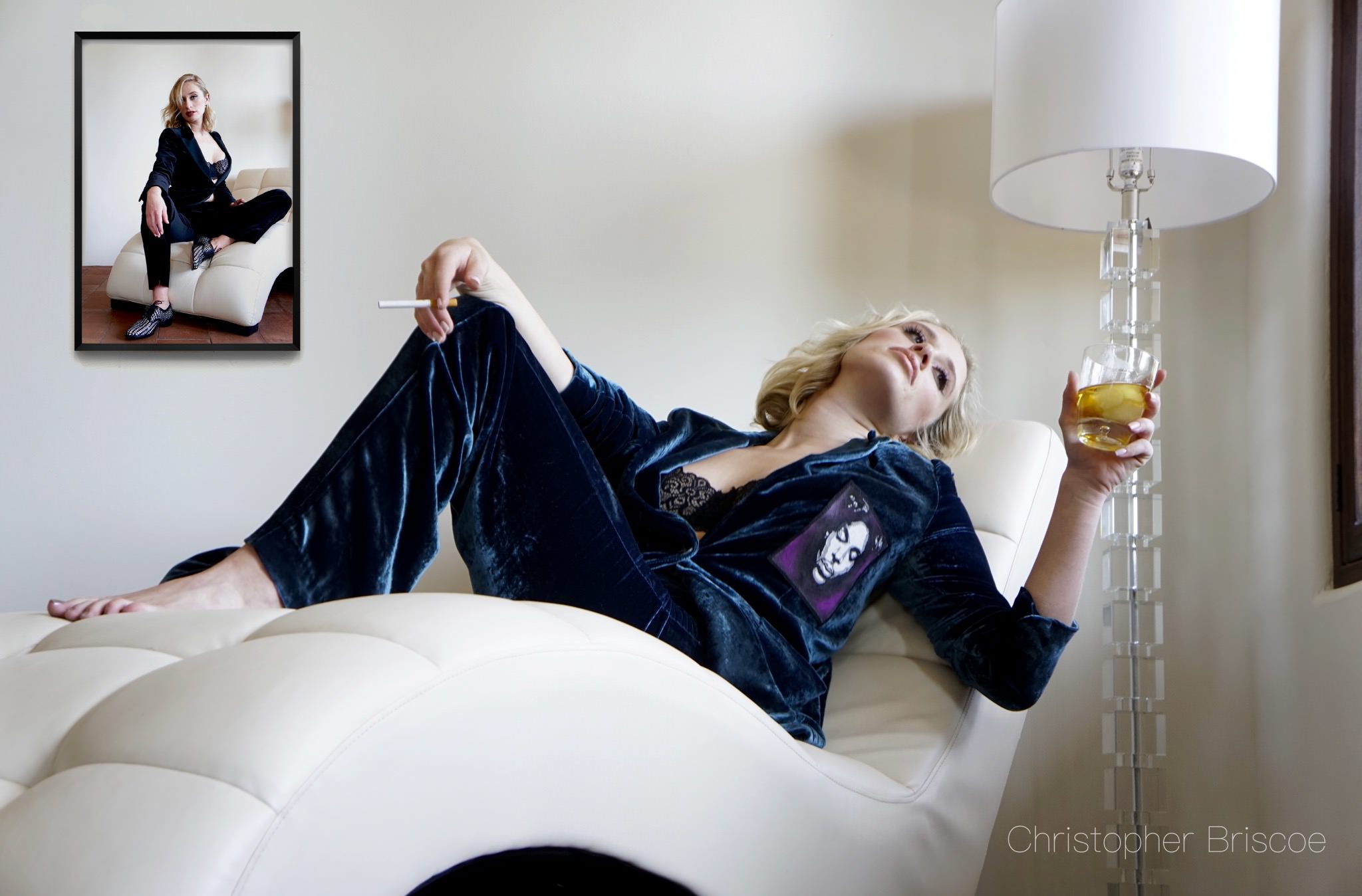 All of them were pros who have worked with many photographers. They leaned into my iPad, gushed and buried me in compliments. I knew my professional workflow had just shifted.

After spending many years sitting behind my studio desk, working with Photoshop, staring into my big iMac monitor, I naturally assumed that playing with pixels on my iPad was just that - playtime. But now that I've spent today's commute on the train, lost in the fun and creative joy in the world of free apps - all of it using my iPad, I have to ask myself, “Why would I ever want to go back to being anchored to a huge desktop?” 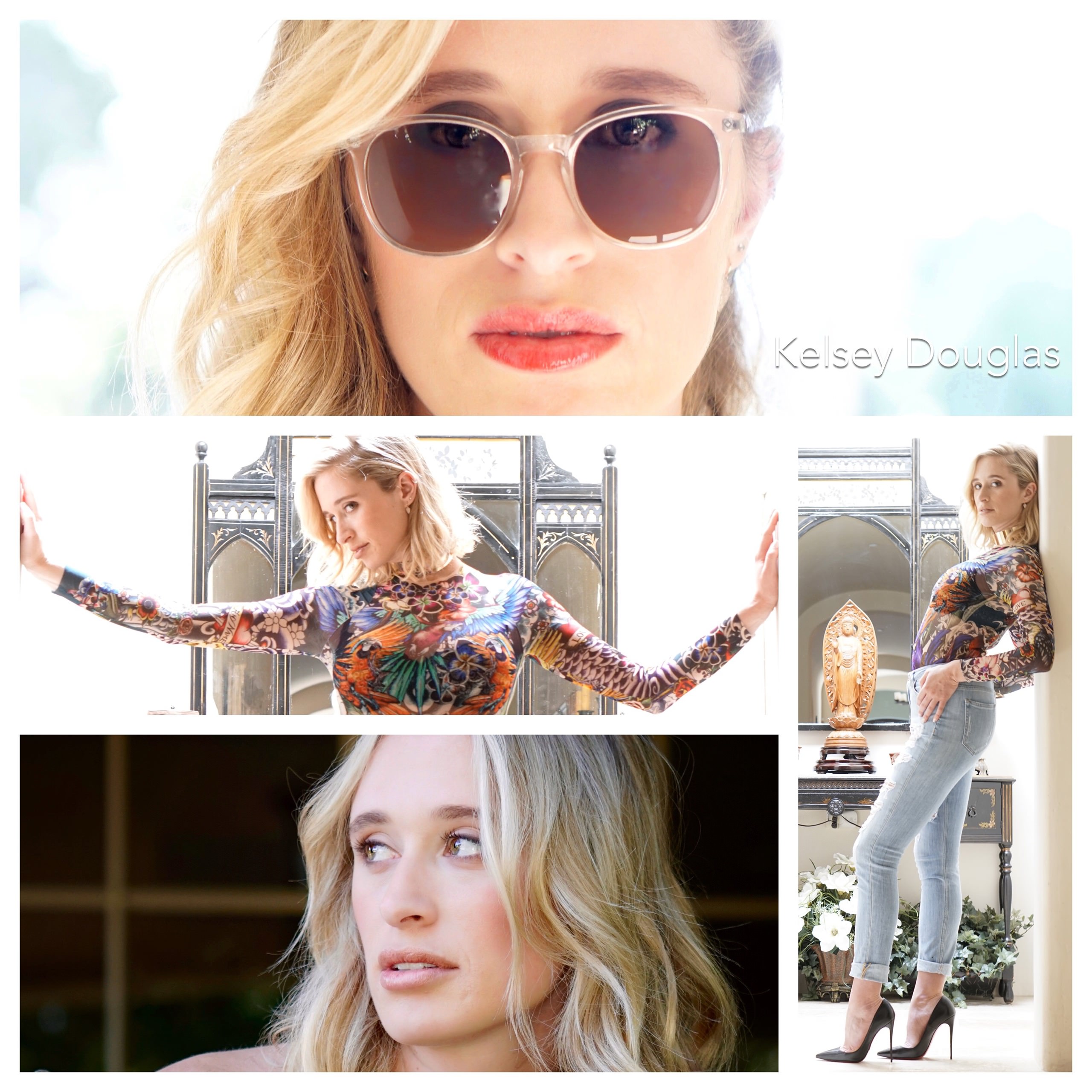 This layout for Kelsey was put together with ease using Diptic on my iPad. — Photo © Christopher Briscoe

I'm sure there must be some challenges that lead me back to my iMac: like using layers and blend modes. Nope, they've got a lot of apps that will do that. How about adding metadata? Nope, there's an app for that, too. What if you want to add clouds, lightening, or a few birds? You may have to invest 99 cents for that. How about Lightroom? Got that too. In fact, once you teak your images with the FREE Lightroom app, it sends it to your desktop. It will be waiting there for you when you walk into your studio and sit down behind the huge iMac - just like you've done for all of those years.

Is Siri a part of photo retouching in our not-so-distant-future? Apparently, Apple is going to enable Siri to apply her skills to third party apps. How about this? “Hey, Siri, remove all of the 50% gray studio backgrounds in this shoot and replace them with…”

Perhaps Siri will ask you what to use as a replacement for those backgrounds. Then you will actually have to think.

No worries. They have an app for that, too.

About the author, Christopher Briscoe:

I wish I could dump my laptop for the iPad Pro but it’s not quite there yet… but pretty close though.. I feel within the next year, I will only need to lug around a 12 inch iPad Pro.

Snapseed team has recently updated the app to allow RAW development on iOS but I have yet to successfully load a RAW file to it directly from an import via SD card thorugh the camera connection kit or any other way for that matter (I am not alone it seems, as many users have been complaining of these issues on Google Forum).. it just loads the JPEG preview instead of RAW file and no develop module.. DNG file I tested worked but that defeats the purpose when on-site editing.

EDIT: here is the correct link for the Google Forums topic that discusses RAW crashes in Snapseed for iOS

Won't that feature need iOS 10 to develop the RAW file? Or very specific hardware (i.e. only the latest iPhones and iPads)?

@ Joseph Snapseed have integrated their own RAW decoder into Snapseed with their latest update.. No need for iOS 10…

I have succesfully edited a RAW DNG inside Snapseed coming from an old Canon A710is that I had CHDK modded back in the days. Snapseed opened the RAW develop module without any hickups.. same for a DNG from a Nikon D90 I got from a friend to test this app out… I have issues with real RAW files which the developer states should work.

in their support website, compatibility states all devices capable of running iOS 9 can edit RAW with Snapseed but as many have reported, it seems to be bug riddled even on iPad Pro.

Hope Google and Nik get the app fixed ASAP.

Serif has a high end alternative to Photoshop CC & Illustrator CC on Mac OS X (or soon to be Macos Sierra the 10th dot 12) with Affinity Photo and Affinity Designer. i trashed my entire Adobe suit!!! Things work slightly different in Affinity in just about every little places so i had to overcome muscle memory. I don't use any Adobe product. In iOS, i use Pixelmator and Procreate. The good news is a full featured version of Affinity Photo and Affinity Designer is coming to the iPad!!!! That's a lot better than Adobe's fragmented Photoshop Fix, Photoshop Mix, & Photoshop Sketch which I find to be the most weird thing ever. i can do what all these apps combined can do in a single app like Procreate (ipad only) or Pixelmator (both ipad & iphone).

I was wondering about switching to a 2-in-1 for a travel so I can get the best of both worlds…touch screen apps for photo and a desktop interface when needed.  Workflow can stay close to the same in many cases if a keyboard is not required.  When the keyboard is required for keywording or something else it is a flip of the switch. I just hate the movement of files from a dedicated tablet to my normal workflow.  I already see many quick apps on both Windows and Mac boxes which take the best of apps and make them better.

Wonder what you thought…I mean everything I need is a cross platform and matching interface solution anyway so even this is less of a problem than ever before.