This is just wicked cool, and precisely the kind of reason that using Apple’s entire ecosystem works so well.

By now we all know that you can shoot a photo on your iPhone and, with iOS 5 and iCloud, have that photo show up in your Photo Stream in Aperture or iPhoto.

We know that you can edit your photos in the new (minimal) photo editing feature in the iPhone’s built-in Photos app. But did you know that the edits you make aren’t only not-permanent, but are actually translated to Aperture (and presumably iPhoto) as actual Adjustments?? (obviously I didn’t either until just a few minutes ago, or I wouldn’t be so excited!)

By now you’ve all seen that there was an update to Aperture to v.3.2 (what, you missed it? Check Software Update, after you’ve upgraded to Lion 10.7.2).

Reader Chris Hoch got an announcement up right away, and other readers have been commenting there—no point in me starting my own discussion! Check it out.

Once you’ve updated all your Macs to 10.7.2… upgraded all your iDevices to iOS 5… migrated to iCloud… updated to Aperture 3.2… you can finally do this:

Something Great About iCloud

I just thought of this…

Click!
“hey, no pictures! Delete that!”
“sure thing”
(…already synced)

Can I plug my iPhone into my Canon yet?!

The latest Live Training Session on Curves is now available for download!

Read up on it here, and as always, just $2. Oh and this one ran long, so it’s just over an hour total!

I was perusing the Apple iCloud features and spotted this… it was expected, but nice to see it in print!

“Keeping a complete set of your photos on your Mac is as simple as turning on Photo Stream in iPhoto or Aperture. Every new photo you take appears in a Photo Stream album just as it does on your iPhone, iPad, and iPod touch.” 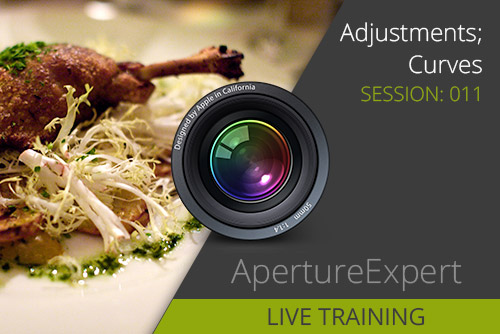 This is the fourth video in a long series about Adjustments in Aperture 3. This one's all about Curves… and like those robots that turn into cars, there's more than meets the eye!

Hit the link to register…

I’ll add it to the store tomorrow, but for now you can purchase below.

One itsy bitsy little caveat to this one though…

If you’ve used any of my presets before, you probably realized that all kinds of funky magic masking trickery goes into them. What this has always meant was that files bigger than the masks (21 megapixel on sets #1 and #5, 24 megapixel on sets #3 and #4) wouldn’t work, because you’d exceed the edges of the mask. Fine.

I’ve been putting the finishing touches on the next Aperture preset pack, titled “Film Funk”. Like the texture packs before it, these are made of a series of built-in textures, derived from high resolution scans of old, aged and beat-up film plates. 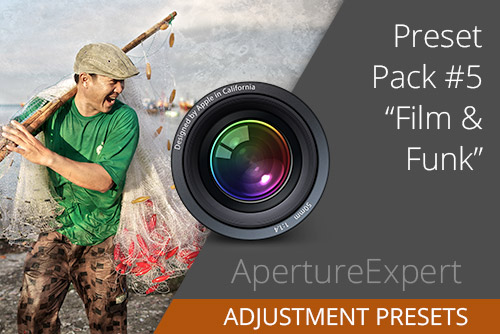 The popularity of applying “aged film” effects to one’s photographs inspired this filter pack. Each of the eleven preset combinations includes a unique high-resolution scan of actual Daguerreotype negatives, applied as a Curves mask, giving you complete control over the look of the effect!
$4.99
Order now

One of Aperture’s more curiously powerful features is Stacks. Unfortunately to the uninitiated, it’s probably just as confusing as it is useful—a point apparently recognized by Apple itself; when Aperture 3 was released, they set the default position of the “Automatically stack new versions” preference to off.

OK, What are Stacks?

Stacks are a collapsible collection of photos. There are two primary uses for stacks:

There is no visual differentiation between these two uses, which may be to blame for some of the confusion. And there’s nothing stopping you from combining these two uses either; ten photos in a sequence, plus a handful of versions of those photos, can all be in a single stack.

Then just to add another level of complexity, you have two stack designators; the Stack Pick and the Album Pick. This allows you to have a different pick in an Album than in the Project. You don’t have to, but you can. Confusing, yes, but also dead useful.

So with all that on the table, let’s go through the steps.

The first update to the latest big cat is out! Not very many fixes mentioned, and it’s an incredibly light download at just 17.4 MB, and nothing specific to Aperture users listed, BUT of course we want to know if this changes anything for us photographers!

Another Photo Contest—with a Killer Prize

I’ve been contest-happy lately, but whatcha gonna do… oh I know, have another one!

Head on over to http://jal.bz/GlobalPhotowalk002 and check out the latest. The sponsor is BacklitBox.com and they’re giving away $130 worth of product to one lucky winner. The contest starts and ends this weekend, and will be judged next week.

I’ve been collecting notes for an Aperture FAQ for over a year now, and it’s high time I get this thing published. It’ll be a lovely source of frequently asked questions for Aperture users of all levels, including topics such as:

Here you go folks… the video is live!

Check out the trailer, and read more about it. Only $2, as always.