JPEGmini; Can It Be Used to Reduce Your Aperture Library?

This one came into my inbox quite some time ago, then I was waiting for an update to the software, and am just now finally getting around to posting it here.

If you decide to proceed with what I’m about to discuss, do proceed with caution (i.e., backup first!). This is an interesting app with interesting possibilities, but I’m not confident enough to apply this to my main Aperture library (nor is it likely to benefit me personally… but I’m getting ahead of myself).

JPEGmini will shrink any JPEG file by up to 80% (5× reduction), “while the resulting photos are visually identical to the original photos” (according to their website). That’s a pretty impressive claim.

Why it’s interesting to Aperture users

When you set JPEGmini loose, it will scan all contents of any folder you point it at. The Aperture Library is a package. A package is just a fancy name for a folder that you have to right click on and choose “show package contents” to view the insides of. See where this is going? JPEGmini can look inside your Aperture package and re-compress every single JPEG it finds, making them up to 80% smaller. And apparently, you can’t tell the difference.

To start, I exported a sample of seven very different photos from Aperture at full resolution (it can handle files up to 28 MP, so I couldn’t test with the 37 MP Leica S2 files I’ve been playing with… I’m sure you’ll contain your tears). I tested a variety of photos; low light high ISO, monochromatic, full sun, mixed color, big solid color, etc. Here’s the collection: I gave JPEGmini a variety of images to crunch on

All you have to do is drag and drop an image or folder of images (or Aperture library) into the app and it processes away. The results aren’t quite 5× but they are still good. Here’s the breakdown; Original size, size after JPEGmini, the % savings, and that number calculated as “× savings”. The savings are significant, but not as dramatic as claimed. The bottom row is total size and total savings.

The total difference is 33.1 MB original vs 15.2 MB after JPEGmini. Not bad. Not 5× by a long shot, but not bad. (NOTE: JPEGmini will overwrite your files, so to produce the above test results, I duplicated my test files first).

Should you run it on your Aperture library?

If you’re tight on space, it could be worth a try, but as mentioned earlier… back up first. The creator of the app has assured me that it’s totally safe in that it doesn’t do anything to the Aperture database, so there shouldn’t be a problem, but when it comes to your photos, don’t trust anything unwittingly.

Depending on how you use your library, this may or may not be beneficial.

Can you really not tell the difference?

This is the interesting bit… is the compression really so clean that you can’t tell the difference? I’m happy to say that in my limited testing, the answer is a resounding YES. It really is that good.

For each image, after running JPEGmini, I opened the side by side, and couldn’t see any difference. But that’s not much of a test.

So then I opened the original and the compressed in Photoshop, and layered them, then set the top layer to Difference mode. This calculates the difference between the two images; if there is zero difference, the resulting pixel is pure black. The bigger the difference, the brighter the pixel.

All I could see were a few very faint pixels, and only if I looked really hard. Here’s a JPEG output of the difference result. Click on it to open in a new window to view at 100%. 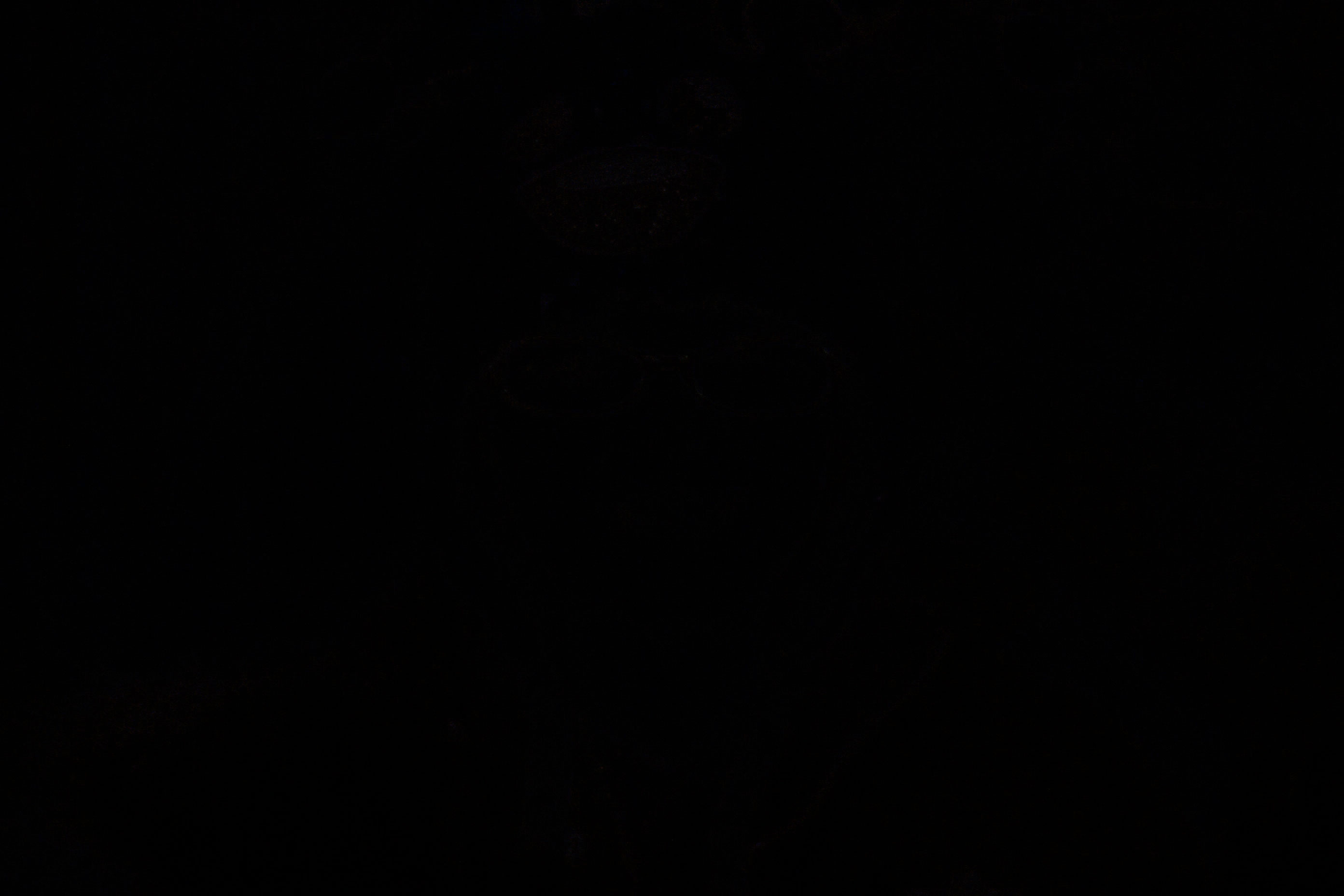 This is the difference between the two photos. Click to see at 100%. The differenced image with auto-levels applied. This is NOT a fair representation of the difference, but done just to really show what changed, cranked up to 1.21 jigawatts.

Mere mortals, without the aid of machine, can not tell the difference. So yeah… JPEGmini does a really, really good job of re-compressing a JPEG, saving space, and not letting you in on the difference. The 5× savings may be marketing hype, and I’m sure if you found just the right image you could get that much of a drop, but as you can see in my tests the best I saw was 64.4% / 2.81×, and the average was right around 50% / 2× savings. Still though, nothing to sneeze at.

Even if you don’t use this for your Aperture library, it’s a handy app if you email photos often, or do web publishing. I ran it on all the JPEGs on this post (some are PNG, which it doesn’t work on), and saving half the size means your download time is half as much. I’ll be keeping this around for some of the large, high resolution photos I post on my photo blog, for sure.

JPEGmini is $19.99 on the app store [link] and they also have a free “Lite” version that does the same thing but you can only run it on 20 images a day. That’s a great way to test it though! If you want to read more about the app first, visit JPEGmini.com.

This looks really interesting! However since the previews are also used for interoperability with other apps, I would like to see how they behave there. E.g. what would happen if these JPGmini’s where synced to an iPad? Also does the app keep all the metadata (like the Aperture fingerprint) in the previews? Have you tested things like this?

Thanks for the review. I’d be interested in hearing if there are differences between the printed versions of full vs JPEGmini files.

Rutger — It should make no difference. It’s still a JPEG, and all EXIF and IPTC data appears to be untouched (as it should be). This is from a cursory glance however, and I have not opened a pre- and post-JPEGmini file into an EXIF reader to compare every single line.

Steve — You should not be able to see the difference. The screen is far less forgiving than print (where pixels bleed together to produce apparent continuous tones), so if you don’t see a change in the JPEG, you shouldn’t see it in print. However, if I were printing, I wouldn’t use this. I’d be sending a quality 10 JPEG or a TIF to the print house. When you print from Aperture, it doesn’t print the JPEG preview, it prints a real-time rendered version from the RAW file + all your adjustments. If you’re uploading files to a print house, you shouldn’t be draggin the JPEG preview out of Aperture, but exporting a JPEG or TIF file specifically for print.

Whoa!, this looks pretty cool Joseph. Living in Japan I am blessed with a fast fiber connection, and sometimes forget that the rest of the world might not. So for web related pictures this might be a really good solution. ;) I will give it a spin for sure. Thank you for the review.

hmm… just did a little test. tried exporting a jpeg from aperture (fit within 2000x2000px quality 10 = 1013kb) like I normally would. I then used used Jpegmini = 564kb, and tried another jpeg export from aperture, same settings as above but quality 6 = 390kb and quality 7 = 509kb … and to my naked eye there was not much difference if any. So for now I will stick with Aperture I think. I still enjoyed the post though ;)

JPEG quality 10 vs 7 or 6 is *very* dramatic. Check out this post “The Difference Between JPEG Qualities” to really see what you’re getting.

yikes, okay that is pretty dramatic. I just one quick sample that looked good at 7. But then I was comparing Q.7 to the jpegmini result, and that did not seem far off for the one sample I was looking at. But I was only looking with the naked eye. Actually I though I was loosing more detail with jpegmini than with Q7 from Aperture, but will have to test with more images. Thanks for the link, it was an eye opener ;)

Awesome review Joseph and glad to see it works so well without harming images. I have used it to reduce my 1TB Aperture Library down by 300GB with no issues and am loving it!

JPEGMini image quality is a bit to hight for web pages. For better compression you can use CompressJPG

Why would you say it’s “too high quality”? No such thing… too *big* I can understand, but if I can get pristine quality at small sizes, why would I want anything less?