Today's cameras put an amazing amount of power in the hands of amateur photographers, but it's not always easy to make use of it. All those buttons, dials, and settings can be pretty intimidating. In this workshop, expert photographer Joseph Linaschke helps you understand what's going on inside your camera, explaining fundamentals like what an aperture is and how shutter speed works. Learn basics such as how to hold the camera, what various modes mean and when to use them, and even how and when to use the camera's flash. There's also creative instruction to guide you towards becoming a better photographer. As you become more comfortable with your gear, you'll find that many new creative possibilities open up for you and the quality of your photography improves. 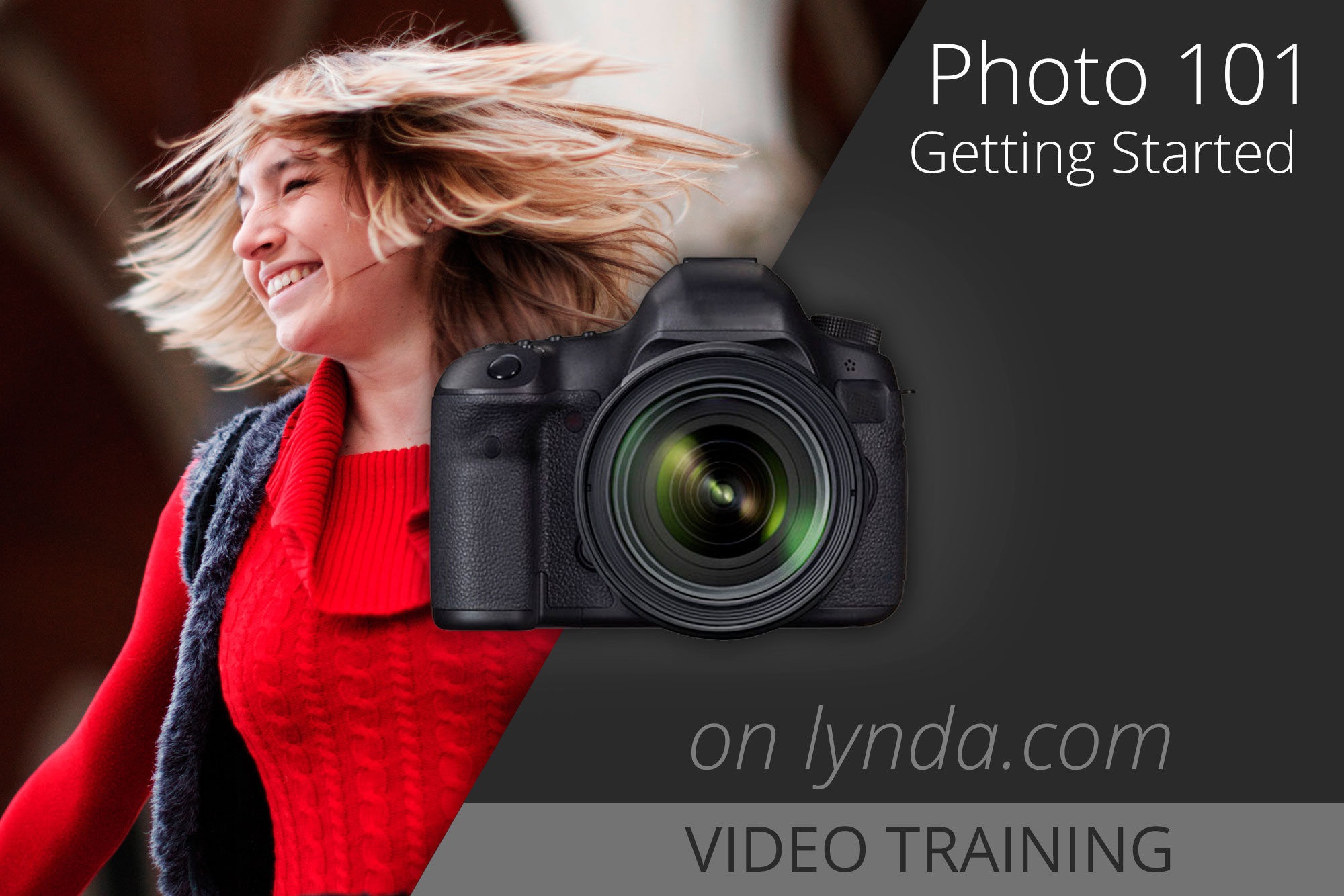 I want to understand more to get a bit more professional & this was an excellent way to start :)

I have really enjoyed all the courses I have watched.

This course is extremely well executed with detailed explanations.

This course is extremely helpful for someone who's new to photography and knows virtually nothing about their new DSLR.

Author was very good – spoke clearly and was enjoyable to listen to.

Very detailed & appreciated the last segment on how to spend your money & the value of lenses vs the body of the camera.

I'm a beginner and found this course provided an excellent overall view of the essential elements of photography. It was not overwhelmingly technical but was in sufficient depth to get someone started.

So happy I spent the time to go through this course!! It was exactly what I needed.

Great info, not overbearing and articulated everything extremely well.

If you know little to nothing about photography then this course is awesome. My guess would be intermediate to advanced individuals would learn something as well.  I will be moving to the next photography course by him. Lynda.com is awesome I am renewing !!!!!!

What a incredible instructor. I would hire him in a second.  His ability to keep this course interesting was great ! I could not wait to get to the next topic. I loved the actual picture appearing immediately after the shot with a detailed explanation of what and why.  I will be seeking more courses from him.

I just discovered your photo lessons on lynda.com, and I felt compelled to reach out and say thanks.

As a recent college grad, I got my first job as a graphic designer with a big-name corporation. Just under a year later, I was assigned to work on a project doing graphic design and photography (ahem mostly photography, not so much graphic design) for a mini-university. Being someone who loves type, illustration and layout, I was always curious about photography, but never really chased down the knowledge until I was handed a really expensive, not to mention heavy, canon and asked to take graduation photos, during the ceremony, in a terribly-lit room, with no tripod or flash, during my second week on the job.

Being familiar with “good” vs. “bad” photography, it was beyond frustrating to see that the photos I took were noisy and blurry and, well, no amount of photoshop could fix what went wrong and I sure as hell had no clue either.

So I searched the Internet, trying to soak up as much information as possible to avoid the same mistakes but nothing seemed to really stick until I stumbled across your videos. I finally understand aperture and shutter speed and I’m only a fragment of the way through.

Thanks a million for taking the time to educate people like me. It’s made a world of difference!

Thank you Charlie, I appreciate that, and am so glad you enjoyed the training this much!

I loved the ability to review information by pausing and rewinding. Excellent beginner course!  Nothing overwhelming for someone who just wants to get to know their DSL better.

Great videos. Used this as a refresher to get back into photography after a infrequent use of my camera.

Very clear speaking voice and keeps video's short and uncomplicated. Focuses precisely on the topic of each video.

This course was very thorough and informative. It has been the best beginner course I have come across yet.  The information shown on each camera and the advice towards all the little details of shooting regarding accessories and light was very helpful. I would come back and revisit this video, and recommend it to others it was very very helpful.

I really enjoyed how professional the author was. It would have been fun to see this author in his natural shooting environment and see what excitement and passion he has towards his photography. I personally enjoy seeing that excitement. I would not change anything in this video however, the author came across as very professional and incredibly knowledgeable.

This was a very good beginning course.  I like how it covered three different camera types as I have a Nikon and I have seen other youtube videos where only a Canon is used for demonstration purposes.  The course covered major areas that a beginner should be aware of.  I picked up a couple of valuable custom settings from this course that are extremely helpful to me.  I also like when the instructor gets out in the field for demonstrations.  Super job.

I'm a beginner. I started into the manual that came with the camera, and also got a For Dummies book. This course gave me a good wide base of practical knowledge to get using the camera. For me this was a much better way to learn. I can now go back to the manual and book and have some idea about what I'm reading.

Joseph Linaschke is a natural teacher. For example he'd explain and demonstrate what an aperture is before explaining the Aperture Priority setting on the camera. This simple step back (to show what something is before showing how to use it) was so helpful. Just what I needed. Also very helpful was when he showed how the photo turned out. Tell me then show me, sounds simple but I learned a great deal by his methods of teaching. His explanations are clear, full of information without language too technical for beginners.

I loved this course, I just bought a micro four thirds DSLR as an upgrade from my point-and-shoot and I had no idea what any of the buttons and dials did.  Halfway through this course I started taking the best pictures I've ever taken and the greatest thing was, I didn't have the camera in 'P', I had it in 'A' and 'S' modes!!!  Thank you, thank you, thank you.

Please do a Photography 201, 301 and 401 series, you are fantastic at your craft and I would enjoy learning even more from you.  Thank you!

I thought he was fantastic. spoke very clear and I understood everything he was saying. I sometimes get confused learning online but he was great.

He's a very good teacher, kept me engaged and explained everything well - i'm a newbie and i've learned so much about photography in a few short days!

Excellent teacher, very thorough but not overwhelming for the photography newbie

He was easy to watch and listen to.  Seems to know what question is in your head…

I have been wanting to know some basics on photography. Even though I don't have a DSLR, the camera I have is sufficiently close that almost everything in this course helped me get solidly grounded in how to take advantage of my cameraâ€”especially the manual settings!

Very personable and presented the information in a clear manner. He distilled the pertinent information very well without resorting to jargon or, when he did introduce terms, he explained them as clearly as possible.

I liked the instructor. Not chatty and didnt waste time.  Appreciate that in a course.  I also liked that he had a neutral voice.  I know that is silly but it is hard to listen to 8 hours of instruction with someone that has a heavy accent, or local twang.  (from Texas myself and I dont think people want to hear a southern drawl for 8 hours either.)

Everything shown in simple, easy to understand format so even beginners can learn easily

This course is very well done, and I am sure that I will put all of these techniques into my practice. I will return to these videos in the future as I explore all the material the instructor covers, and it will serve as a good refresher to solidify my skills.

He does a very good job of explaining the material. It moves at the right pace, and he is obviously well-versed in the subject matter.

This course covered sufficient material for this level of training.   I was able to pick up some good tips and concepts even though I know the basics already.  Great course.

The author had a good presentation style, was knowledgeable on the subject, and presented very well.  He has a good style for presenting.

This course was the most useful that I've see so far. Great!

The Instructor was very knowledgable for a beginner such as myself and I learned a lot. Please have him do more courses like Photography 102 and continue.

EXCELLENT.  Very well-planned content.  It covers every detail that a beginner doesn't even know they don't know, like how to hold the camera and how to buy equipment.  I will probably come back to re-watch sections of this course because I found it that valuable.

A natural born teacher.  He has a way of explaining the concepts that reaches to a beginner and helps take them to the next level.  He really understands how beginners think and covers absolutely every concept they need to know about photography.  Very well done.

I loved how he used all three manufactures cameras to demonstrate.  I have a Sony and so I really was able to gain info. about it with the demonstrations.  thanks you

very knowledgable, interesting, and used alot of visually aides to help me understand.

Found these videos after watching the Foundations in Photography: Exposure and Lenses series. I really wasn't expecting much, and just wanted to ensure that I had covered all the introductory courses in photography. Completely anticipated, going over the same ground as I had already covered. Therefore, I was pleasantly surprised to find there was still loads to learn from this series of videos and that they have complimented the others I have watched to this point.

This was one of the most informative tutorials that answered so many questions in a brief “to the point” manner.

Very informative.  I learned a lot and the advice was very practical and useable.

You could tell he was a seasoned professional but he didn't teach like his audience was.  He spoke in plain English and explained everything for the laymen.  Great work!