Take a Broom to Your Aperture 3 Library

Locating software to find duplicate images isn't very difficult—writing the code to match things like file names, capture dates/times and metadata is, by coding standards, pretty easy. Matching very similar images which aren't the same, however, is a lot tougher.

This is the feature which separates PhotoSweeper (version 1.9.7 as of this writing; available on the Mac App Store) from the rest of the pack… OK, one of the features. It's user interface, displaying the images with a easily zoomable view, distinctive identification of similar images and tuneable settings also make it stand out from the crowd. 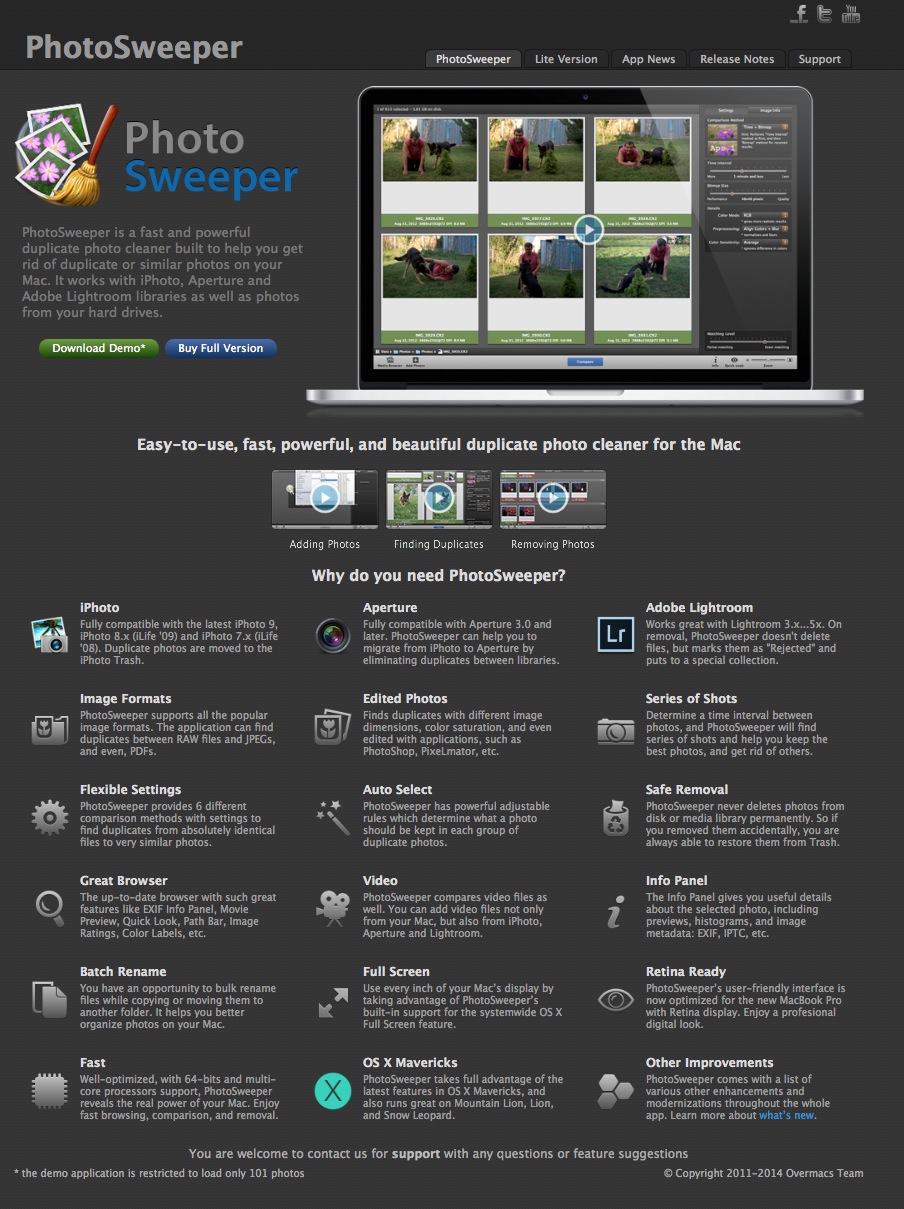 Photosweeper’s homepage shows a huge list of features and benefits

PhotoSweeper makes comparisons based on “An algorithm for comparison and grouping: Bitmap, Histogram, Time Interval, Time+Bitmap, Time+Histogram and Duplicates Only”.

For finding exact duplicates, PhotoSweeper searches for identical content, regardless of the file name (although there is a setting for this in preferences, forcing PhotoSweeper to find matched file names…) so it easily found and identified a folder of images which had been imported from a card twice, which results in a (1) being appended to the end of each file name. Deleting these via the finder is, well, a hassle. Using PhotoSweeper made life very easy.

A batch of RAW+JPEG images had PhotoSweeper finding each pair as a match, but this problem can be solved with a quick trip to preferences, where I selected “Photos of the same format only”.

Aperture handles RAW+JPEG pairs well – I'm not keen to delete them by accident – so I'll leave that setting on.

Talking of preferences, PhotoSweeper can not only compare photos, but videos, Quicktime files, flash files… lots of things. You can choose to remove different file formats via preferences, and sort the photo list and results.

Using the default settings, I found sports images were often incorrectly marked. Distinctively different images were marked as duplicates, probably because the capture time would have been the same down to the second and the bulk of the image – the only noticeable difference being the position of the ball – had PhotoSweeper marking them as dupes, when sometimes one was worthless and the other publishable. I also found some similar issues with bokeh. If you shoot the same scene stopped down and wide open, the backgrounds will often look very different, but PhotoSweeper often considered them duplicates.

So you need to be careful – tweak the settings and PhotoSweeper got the comparisons right, narrowing the results considerably.

In a similar way, using the histogram option while searching avoids matching images which are duplicates in composition, close in time… but widely different in exposure, such as multiple images shot for high dynamic range.

Once you've done you search, you can choose to send the matched images to the trash or move them to a folder of your choosing - I dumped everything off my low-capacity SSD to a back-up external drive.

I have many Aperture libraries, because I shoot so much data and use multiple computers, and also need to share images with colleagues, so duplicate files are an occupational hazard.

But having been burnt badly by Aperture 1.0, I'm now naturally cautious and started out by testing PhotoSweeper on a duplicate library.

You load the images via the media browser button at the bottom left of the default window—a whole Aperture library, a project, whatever, just find it in the media browser and drag into the main window of PhotoSweeper. I decided to use a personal library of images which should have been of a trip to a wedding in Fiji (no, I wasn't the wedding photographer, but interestingly the happy couple put only my images on their Facebook page…). However, I soon found I must have synced my iPhone to the same library, as there was a myriad of screenshots, stuff I'd shot to send an explanation image to my wife… you know, modern life stuff.

PhotoSweeper made it really easy to dump this stuff. Before you hit the big 'compare' button at the bottom of the screen, double click each image you want to get rid of.

Once I'd done that, I ran a compare based on Time+Bitmap. This method looks at the time interval between each frame (controllable through hours down to seconds) and a bitmap of each image—a tiny representation of the colours within the images. You can choose many settings between very coarse 16x16 pixels to finer grained (128x128px). Photosweeper scanned the 22 GB of images then ran the comparison in seconds rather than minutes, even with the images on an external USB 3 drive connected to my portable Mac, a 2012 11-inch MacBook Air.

The result, for me, was the recognition by PhotoSweeper of many images with slight variations in pose (smiles etc) and bracketing. At first I thought there was a bit of magic built-in too, for PhotoSweeper had almost always chosen the best image of each set – until I realised the images it chose were those I'd flagged in Aperture.

PhotoSweeper marks the images for removal by your preferences based on metadata, which can be fine-tuned in preferences. 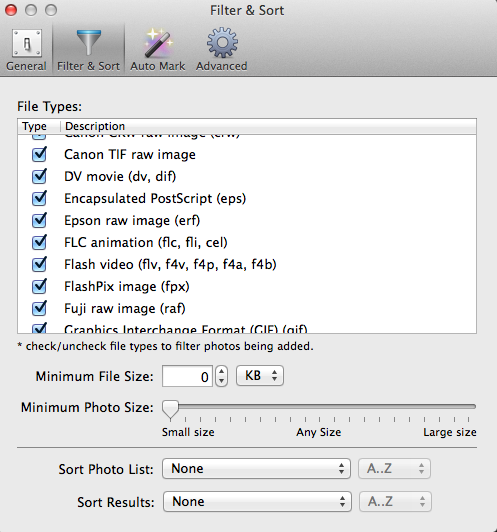 You can fine-tune your search by file type. 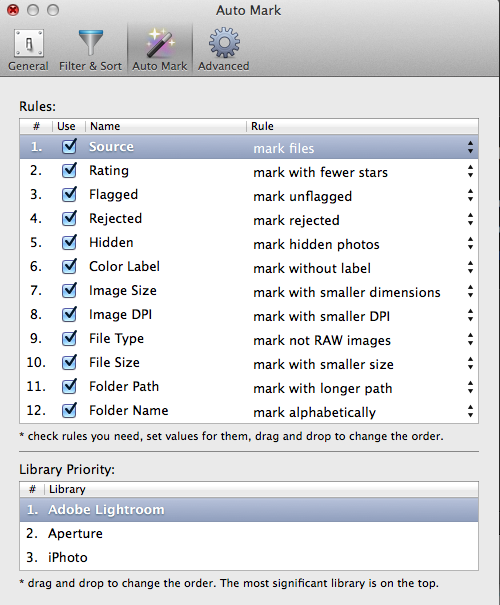 By default Photosweeper will mark for removal the images that are smaller, have fewer stars, are unflagged etc - and you can set this up to your workflow in preferences.

Once you've done the comparison, you're in Group List view, where you can scale the images from thumbnails to just two images across on the screen.

To really determine the right image to remove, select Face-To-Face, at the top of the screen. This shows a pair of images and thumbnails underneath, and makes it easy to choose the best image. 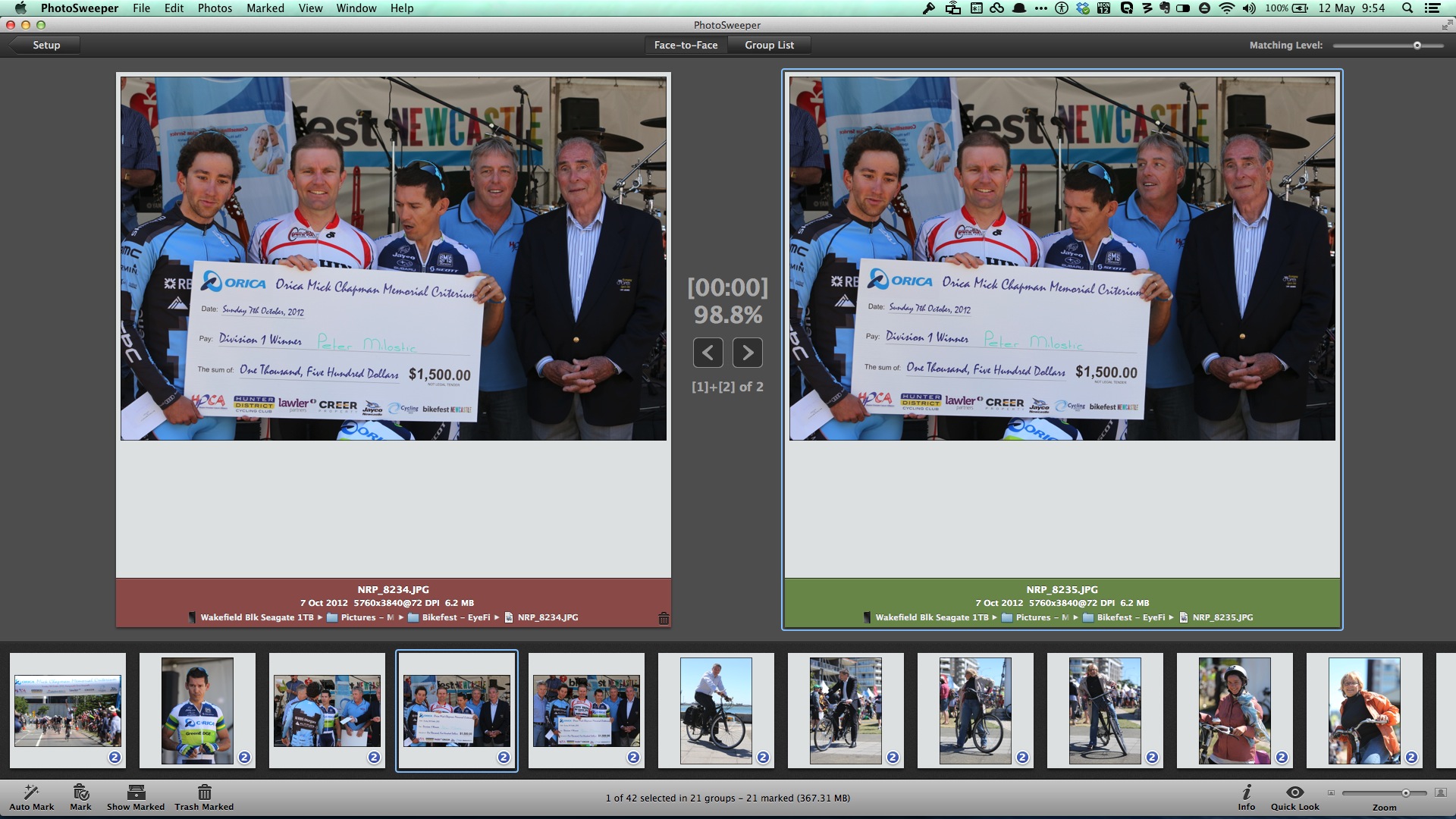 Depending on your preferences and settings, PhotoSweeper will return subtly different images as duplicates, such as the pair above. You can choose to trash, move or keep one or both.

Using stacks within Aperture can help you do similar functions, but they're based solely on time and aren't really seeking duplicates but rather just groups of images—and I find importing using stacks slows the process down a lot. PhotoSweeper will help you isolate similar images, choose the best one and dump the rest from your Library. Hitting Trash from PhotoSweeper on images stored in an Aperture library will throw them into Aperture Trash, not system trash.

PhotoSweeper is also excellent for culling images from an Aperture Library.

Do an initial view of the images, tagging the ones you like, then run PhotoSweeper to help cull the extras, then move them out onto a back up drive to be forgotten, unless there's a good reason to go dig through them later.

I never delete anything - hard drives are cheaper than a re-shoot, so I’m taking advantage of PhotoSweeper’s ‘Move’ capabilities to keep my Aperture libraries compact.

At US$9.99, PhotoSweeper is an absolute bargain. It'll save hours of drudge work sorting images, and even save you money in freed-up hard drive space, too. Although there are other duplicate-finder apps available, I couldn't find one which worked on images in folders, iPhoto, Aperture and even Lightroom.

If you use Aperture hard enough to read ApertureExpert and get right through this article, you need PhotoSweeper, at least until Apple builds its functionality into the program.

PhotoSweeper has an excellent website which has lots more information a downloadable demo and links to its Youtube Channel with tutorials.

About the author, Nigel Paterson:

Will PhotoSweeper work on both managed and referenced Aperture libraries?

Yep, it works either way. As far as I know there aren't any specific limitations, but I know the creator is monitoring comments here so I'll let him respond.

Yes, the app supports both types, you can try a demo to check it. It’s available on our site: http://photosweeper.com and has full functionality, except you can add up to 101 photos at the same time. FYI, you can reach us by email overmacs.dev@gmail.com for any questions or suggestions. 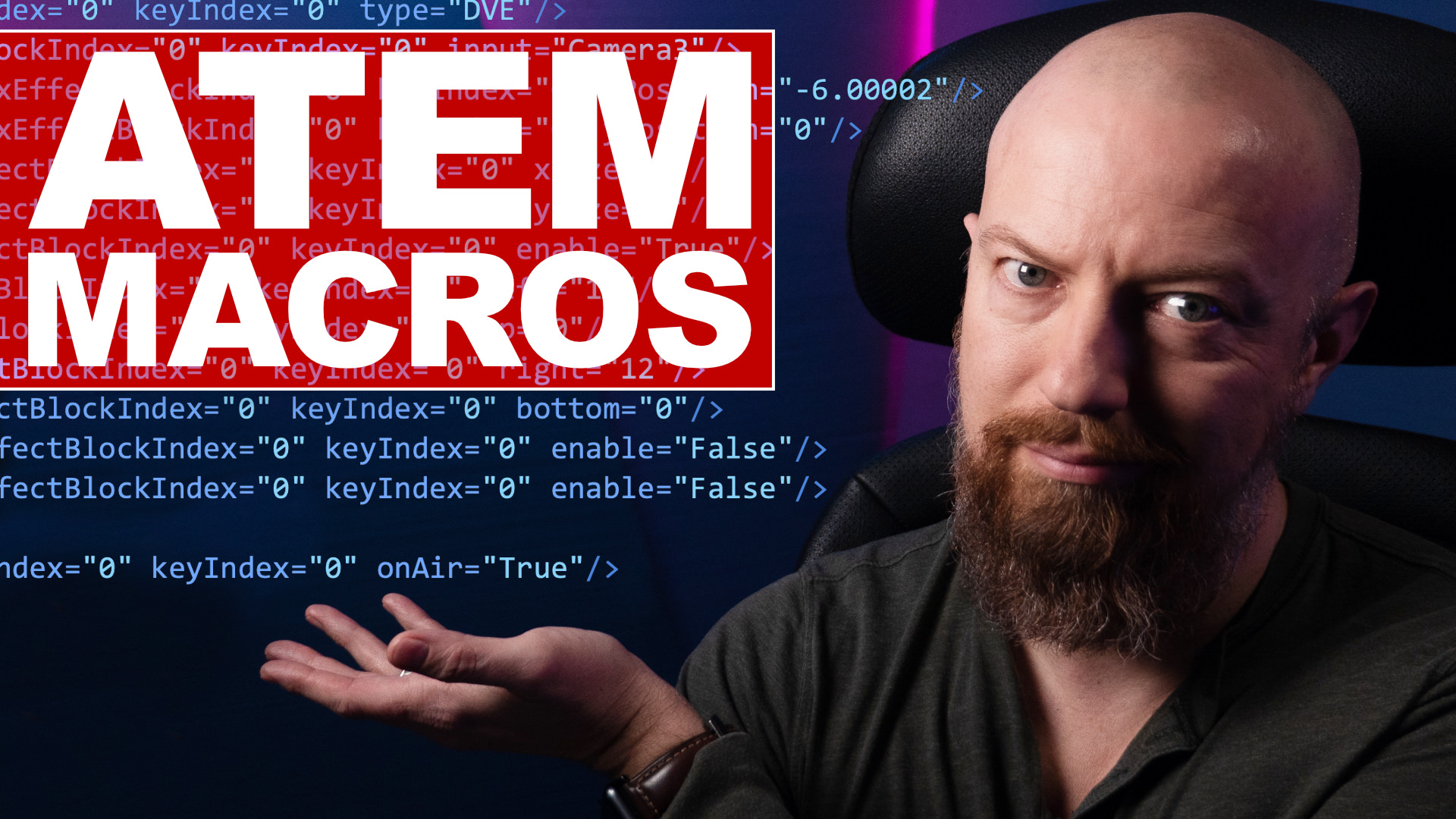