I'm a huge fan of Backblaze, as all regular readers know. I just received an email that they have updated their service to version 4.0, which incorporates a significant change that can dramatically speed up your backups if you're more than 500 miles away from their datacenter in Sacramento, California. They've introduced what they're calling “threading” to their backup, which you as the user can control.

If you read the entire update announcement article, you'll learn that what they're calling multiple “threading” is actually multiple processing, but regardless of what they call it the point is you can potentially get massively improved backup (and restore) speeds  — but the catch is that you have to manually tweak and monitor and find your own personal best. If you have a terabyte left in your initial backup, or regularly add several gigabytes of data at once (I'm lookin' at you, fellow photographers), then this may well be worth your time to explore and implement.

In the article they mention that one beta tester was able to jump from 1.7 Mbps at 1 thread to 12.1 Mbps with 10 threads (the max), which is obviously very impressive, however they also point out that this is not likely to be typical. But given that result, as power users it's definitely worth your time to look into.

If you want the update now, you can check for updates under the Backblaze icon in your toolbar, or wait for them to push out the updates in a few weeks. When you update, you'll see this very important dialog:

The Backblaze update dialog warns you to NOT uninstall before upgrading

Notice it points out to NOT uninstall your current version before updating. Since the download includes an uninstaller, that's a good warning to heed… don't double-click the wrong icon!

By the way, you can run a speed test from your location directly to Backblaze at backblaze.com/speedtest, which will give you some estimates on how fast your backup will be — without implementing threading. I'm currently working in South Korea, which boasts the fastest internet in the world (although I'm not setting any world records specifically where I'm at), but as you can see I can get a pretty impressive backup speed from here: 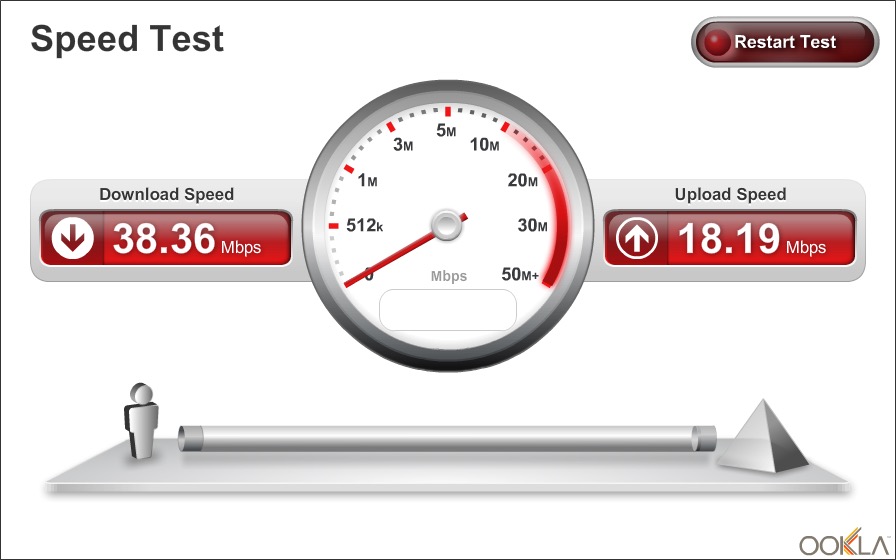 Once installed, when you look in the Backblaze preferences you can see your current/previous backup speed, and start playing with the settings. 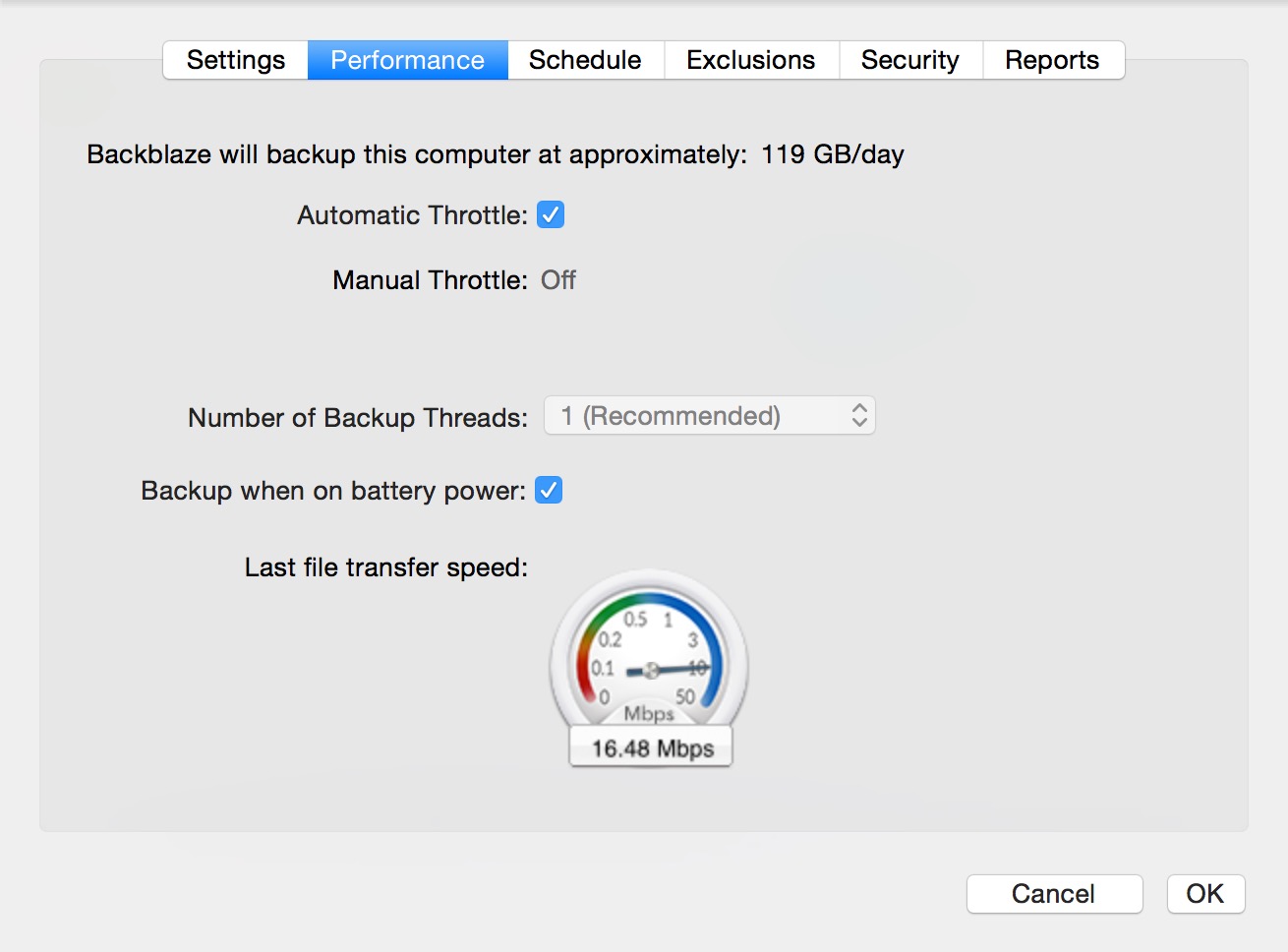 The default settings show I can backup 119 GB per day at 16.48 Mbps, with the default single thread

To enable multiple threads, you need to turn off Automatic Throttle and start playing with the numbers. What's interesting is that it shows the predicted increased update quantity and performance. 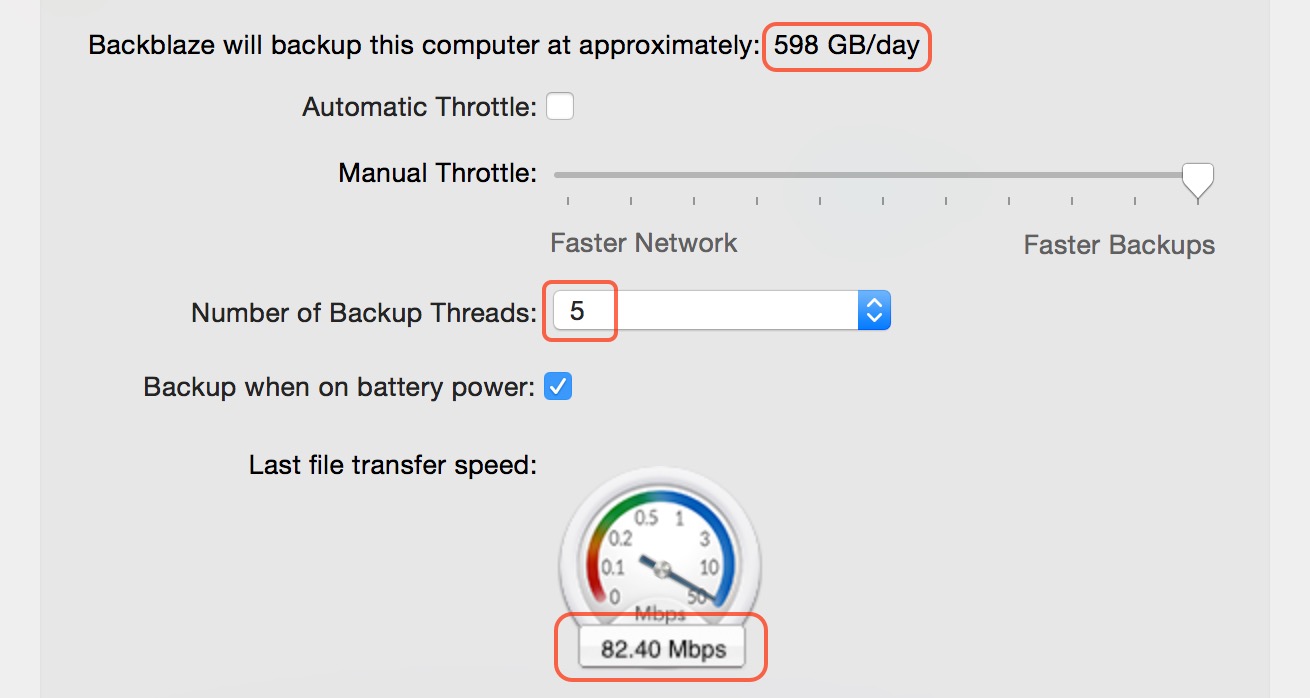 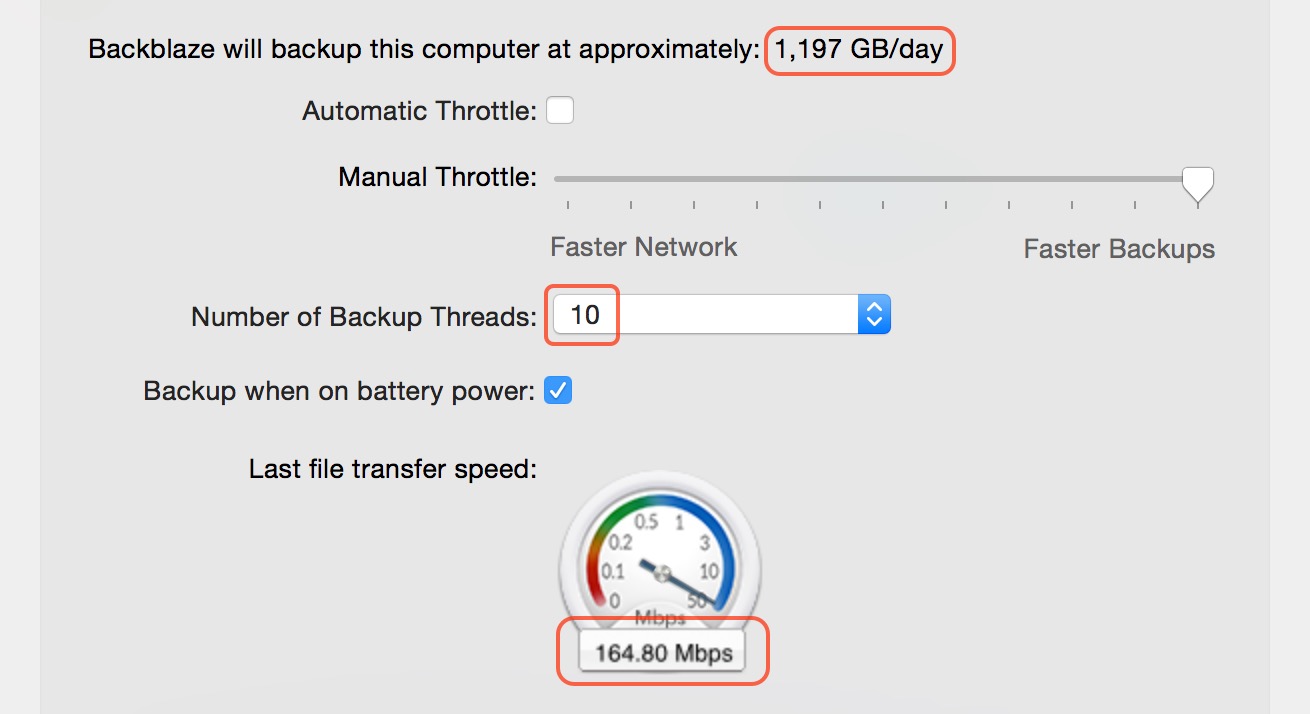 However, from the speed test we know that my upload speed to Backblaze is only 18.19 Mbps, so clearly there's no way I'm going to magically jump to 164.80 Mbps as the ten-thread predicts. Do keep that in mind, please!

We already know from the Backblaze announcement article that the only way to know for sure is to test it and monitor as you go. According to Backblaze, to keep an eye on things, “you’ll be monitoring network traffic and CPU utilization”, which to me translates to “too many threads may eat up your bandwidth and computer power, leaving you without enough of either to go about your day”. So follow their advice and proceed with monitoring.

If you've been putting off cloud backup because “it'll never finish”, or “I have way too much data / too slow of a connection”, there's never been a better time to try. Get started now. I have over 5 TB across multiple Macs backed up, and I don't even have amazing bandwidth at home.

It's only $5 per month or $50 per year, per computer, for unlimited data. And you can get 15 days free, which is at least enough to figure out how long it'll really take to get that first backup finished.

Thanks, Joseph.  I just updated to 4.0.  I’ve been using Backblaze for at least a year now and the piece of mind that all of my photos and data stored on my laptop, external HD and off site HD is backed up and reachable is worth a measly $50/yr.  Also, Backblaze lets me know when my offsite external HD can’t be found so it serves as a reminder to bring it home, copy new files or photos to it and then run a BB backup!