Create Movies From Your Panoramic Photos with Instapan

I love the panoramic feature in my iPhone. It works really really well, and if you've walked into an Apple store recently, you've noticed that they can be printed really really big. (For those who haven't been in one, they all have art created on iOS devices adoring the walls right now, including some very nice, very large panoramic prints). The shot below of the Golden Gate bridge in San Francisco that I shot a few weeks ago came off my iPhone 6 Plus at 3,138 × 9,746 pixels — that's over 30 megapixels! So cool.

This panoramic of the Golden Gate bridge came off the iPhone 6 Plus at over 30 megapixels! What you’re seeing is scaled down to just 2048 wide though.

The thing is, I rarely shoot panos, because I have no good way to share them. Even if you share on Facebook and don't crop it, it still is a tiny strip of picture on your screen. And if you love Instagram as much as I do, then it's a real drag. Obviously cropping this square would miss the entire point, and putting this inside a square box reduces it to a 200 pixel tall image. Yuck.

In the past, I've had some fun putting them into frames, doubling or tripling the image and moving each version over a little bit to show it all off, as in the shot below. This is a neat way to do it, but it's not the best. After all, you are still reducing the image to less than ½ or ⅓ the height of the Instagram box.

Here's another original panoramic, shot while recording a special edition of TWiP during WPPI this week.

Part of the TWiP crew recording a special session at WPPI. How do you like that high tech lighting we used?!

And here's my original Instagram solution; putting the same photo into a three-piece box. Which is totally not as cool as a three-piece suit. 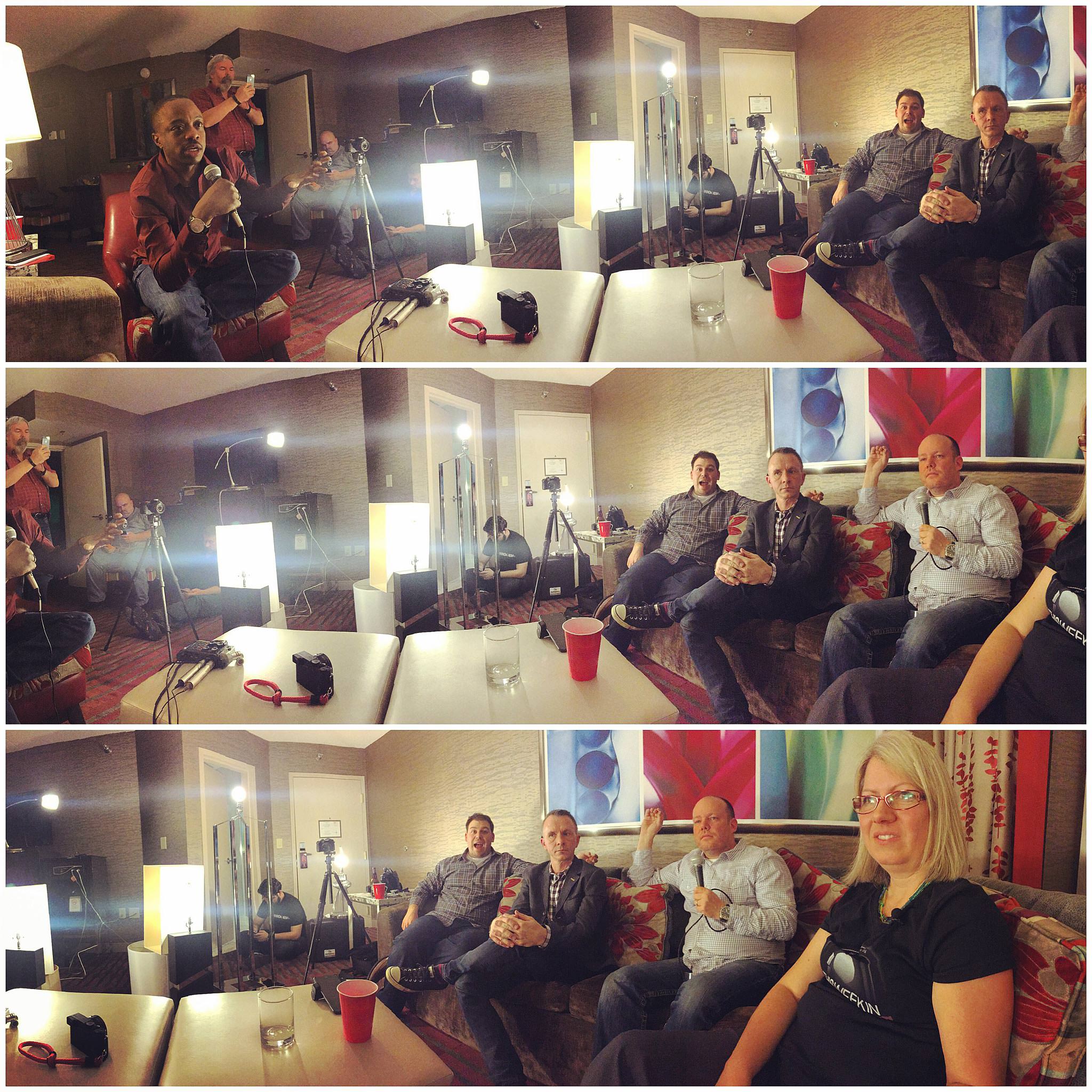 Here’s one way of handling panoramic photos on Instagram; just place the same photo in a two or three piece frame, and pan it over bit by bit

So make it a movie, you say!

Yeah, that's the obvious choice! Unfortunately Instagram itself doesn't let you turn a still image into a movie. I tried doing it in iMovie, and while you can make a movie of a still image and have it pan a-la-Ken-Burns effect, you can only create a 16:9 movie. Which you could then crop in Instagram, but at best you'd be cutting off one end of the movie/photo. So that's no good.

Turns out, there's an app for that

App store… search… “panoramic video instagram”… result = Instapan [free, 99¢ in-app purchase to remove watermark]. It does exactly what you want it to do, and is very, very simple. It works like this. 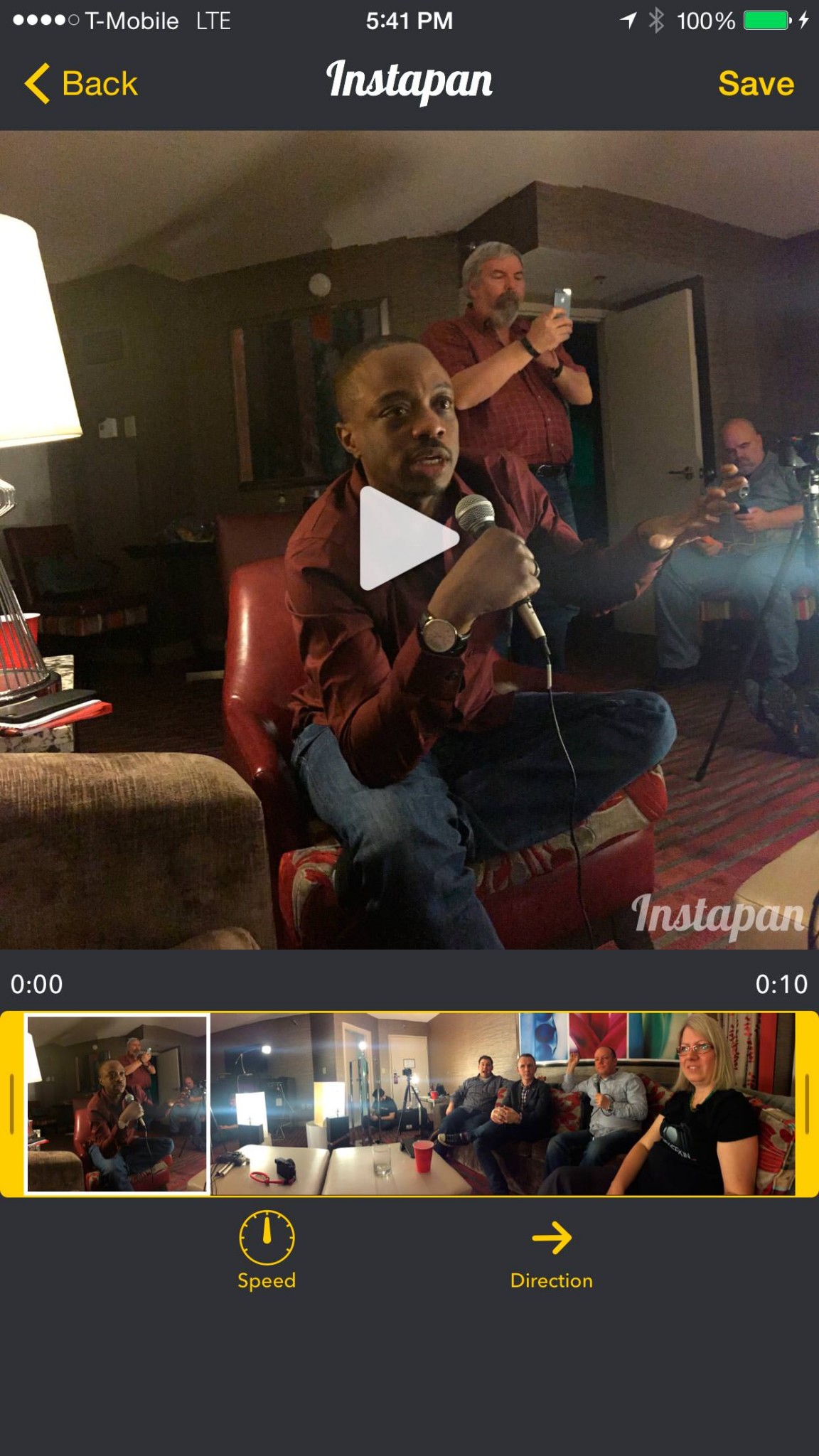 The Instapan interface is very simple. Watermark is optional; 99¢ removes it.

As you can see there are only two control buttons. The Speed button toggles between 1x, 2x and 0.5x speed, and the Direction, well, changes direction. And that's it. You can change speed while it's playing, which is a nice touch, and see what feels best. In the screenshot above, you can see the watermark on the image. I'll warn you that the watermark on the actual output is considerably larger; check out the TWiP Instapan video on Instagram.

For just 99¢ though you can remove that watermark as an in-app purchase; totally worth it IMHO. 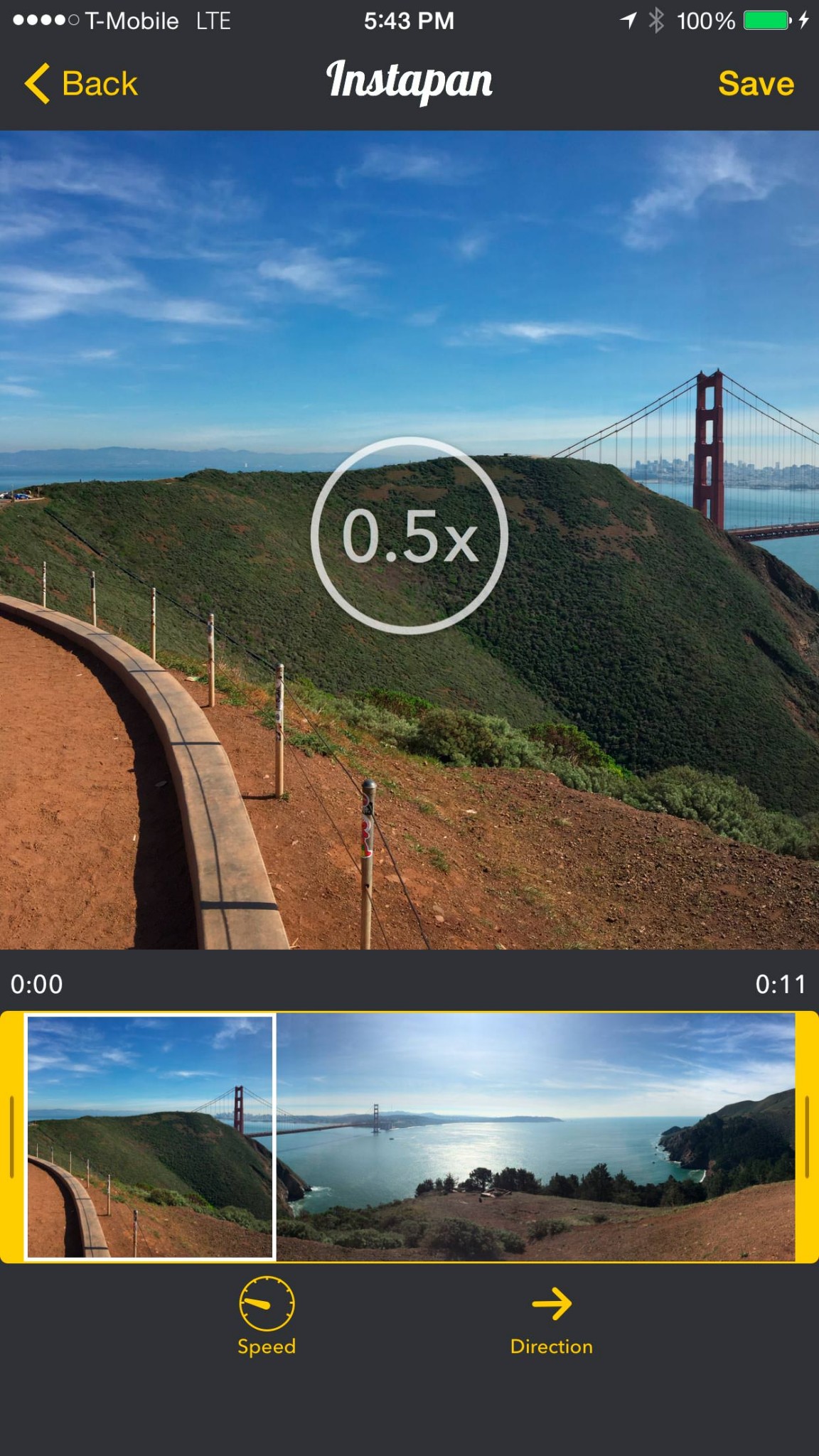 Setting your playback to half speed will, of course, make the movie twice as long

Once you're done playing around, just click Save to save the video to your camera roll. The video is saved at 640 × 640, so Instagram standard size.

There's no audio capability, so you can't add a music track to your animated panoramic, which is too bad. Although you could ask where it would come from, which opens up a whole new can of worms. You can't legally just grab anything off your iTunes library, but if you had audio from another video you wanted to include, or if you happen to have audio tracks you can use on your iPhone, that could work. It'd just be nice to have the option.

Overall though it's a great, simple app that does what it says on the box, and does it really well!

Instapan by Tap-It Labs
Free on the App Store, 99¢ in-app purchase to remove watermark
Screenshots with Version: 1.0.1, iOS 8.1.3, iPhone 6 Plus