Applying Your Favorite “Look” at the Time of Import

Aperture has a really neat feature where you can apply any Effect Preset — one that came with Aperture, or one you've imported or made yourself — to your photos at the time of import. While this makes the entire import process take a little longer, if you're not in a rush when importing, this could save time later.

Do you commonly apply a similar look?

Look back through some of your favorite photos. Have you applied a consistent look to them? I usually do… most commonly I'll draw in an s-curve, pull back the saturation a bit, likely recover highlights (the s-curve has a habit of blowing highlights), and perhaps add a vignette.

Here are the adjustments themselves… 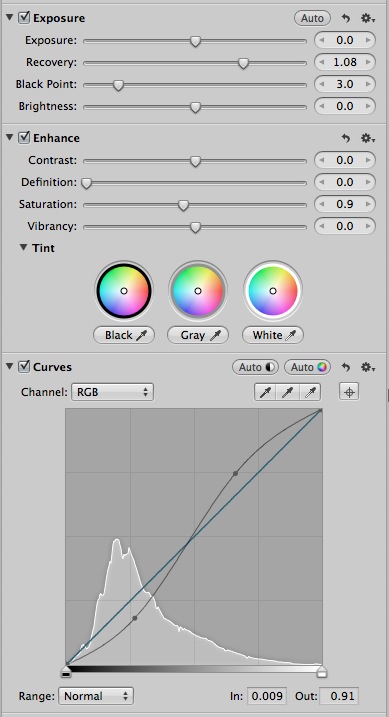 Here’s the recipe… a dash of recovery, a touch desaturation, and a heaping spoonful of s-curve

So if you know you'll be doing this a lot, why not make an Effect Preset, and apply it at the time of import? You can always undo later.

Save your own custom Effect Preset

To save your own custom adjustment effect presets, select any image with the adjustments you like already applied, then from the Effects drop-down, choose Save as effect… and the Effects Preset editor will open. Your preset will be saved as “Untitled”, so be sure to name it something clever. 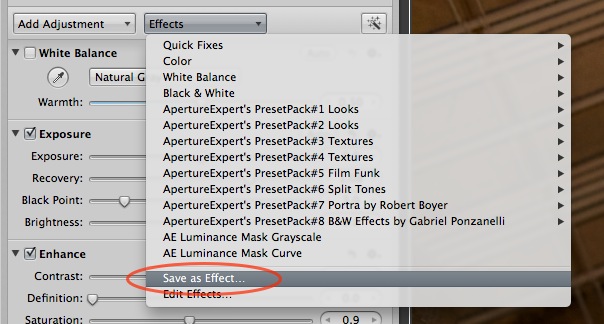 Once you’ve dialed in the combination of effects you want to save, select “Save as Effect…” from the Effects drop-down menu 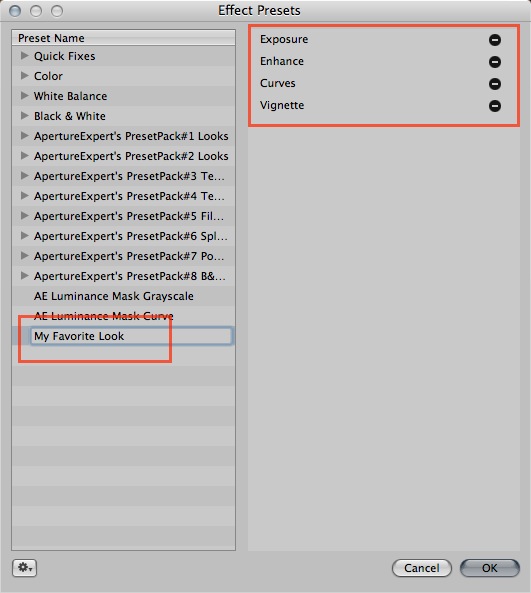 All of your adjustments are saved here (except crop), and don’t forget to name it something descriptive

Apply your preset on import

All that's left to do is select your preset at the time of import. In the standard import dialog box, one of the options is “Effect Presets”. Select the effect you want from the list, and that's all there is to it. When you import those images, Aperture will apply the preset to them automatically. 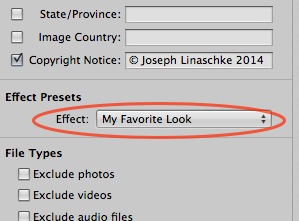 To apply your preset on import, just select it from the Effects Preset menu in the Import dialog

If you don't see that Effects Presets option, you can enable it from the Import Settings drop-down in the top right of the Import window. 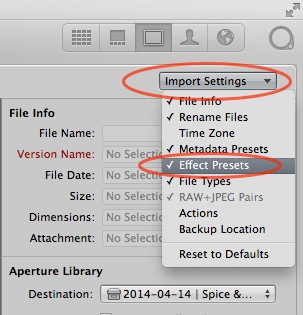 If you don’t see Effect Presets in your import options, add it from the Import Settings drop-down menu

If you don't like the look, naturally you can adjust it, or just start over.

You can remove all adjustments from a single image by clicking Revert to Original at the bottom of the Adjustments tab.

This button will remove all adjustments from your photo, staring over from scratch

Or if you want to do this to a bunch of images at once, select the ones you want to revert, and from the Photos menu, choose Revert to Original. You'll want to be sure that Primary Only is not enabled; if you select a bunch of photos and choose Revert, and only one actually reverts, it's because Primary Only is on. Just toggle that off and try again.

The “Primary Only” state will keep you from reverting all of the images you’ve selected, and only revert one of them

Just a couple of tidbits to know about this…

Do you ever apply presets on import?

It's a cool feature, and I wonder how many people actually use it? If you do, tell us what kind of preset you apply!

Josephy,  Yes, I have created my own preset.  I found that I was often decreasing the exposure slightly on my Canon 5DMarkIII’s initial exposure on photos imported. So I ceated a preset with a slight decrease in exposure, a slight bump in vibrancy and a slight S curve, not quite as “deep” as yours. I start there and then make other adjustments for the effect/look I want.  Sometimes I need to readjust one or more of the parameters in the preset and sometimes I just load the images without the preset and run through the various bricks. It depends on the number/type of photos, my mood, etc as to which way I choose to go.