I got an iPad for my Mom just before the baby was born, so that we could send her pictures. I had tried getting computers for her before, but she was never interested. Now that there's a grandkiddie, she's all over that iPad. At first, I was getting emails asking “can I have a print of the baby in that blue onesie?” Needless to say, if you're using Aperture and you've got a baby then finding a picture of “The baby in the blue onesie” is not going to be easy. 20 of these requests and you've lost an afternoon.

At some point, I started using Photo Stream, and got that going on my Mom's iPad so that I didn't have to email pictures to her anymore. I also got my Dad, my wife's dad, and my sister on it. It's a big improvement over emailing photos, as I don't have to send separate emails and (even better) it's easy to see what I've already published.

I came up with the idea of telling my Mom that if she wanted a print, she had to “like” that picture. No more emails asking for the picture of the baby sitting on the floor in the living room. She's started “liking” photos. Good, so far. I then realized that finding and marking “Liked” photos in a photo stream in Aperture, to be blunt, sucks. You must set the inspector to Info, and set the pop-up menu to comments and then browse a photo one at a time. When I see a “Liked” photo, I can then set the inspector back to Library, and drag the photo to an album of pictures to order. However, when I do this, each photo dragged creates a new Untitled project. In addition, after each photo I have to click back in the Info tab in the Inspector, and then set the pop-up back to comment. This makes for a very clumsy, disjointed, and slow workflow.

I decided to see if this is better in iPhoto. And it is - vastly better! Open your Aperture library in iPhoto (remember this is a new capability introduced in Aperture 3.3). Create a new album in which to place the photos you'd like to order. Go into your shared Photo Stream, and click on “info” so you can see Likes and comments. Use the arrow keys to move through the Photo stream, one photo at a time. When you see a photo that's been “Liked” then drag it into the album. Voila! You're just clicking arrow keys and dragging to the album, and it makes for a smooth workflow.

(scroll down below screenshots for an important editor's note) 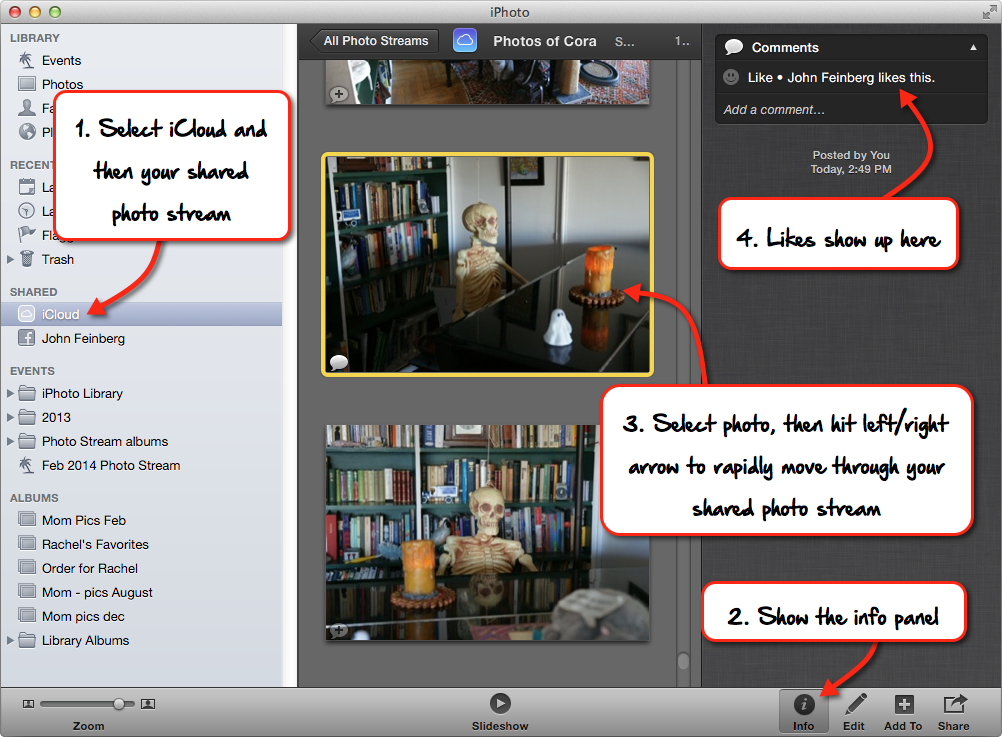 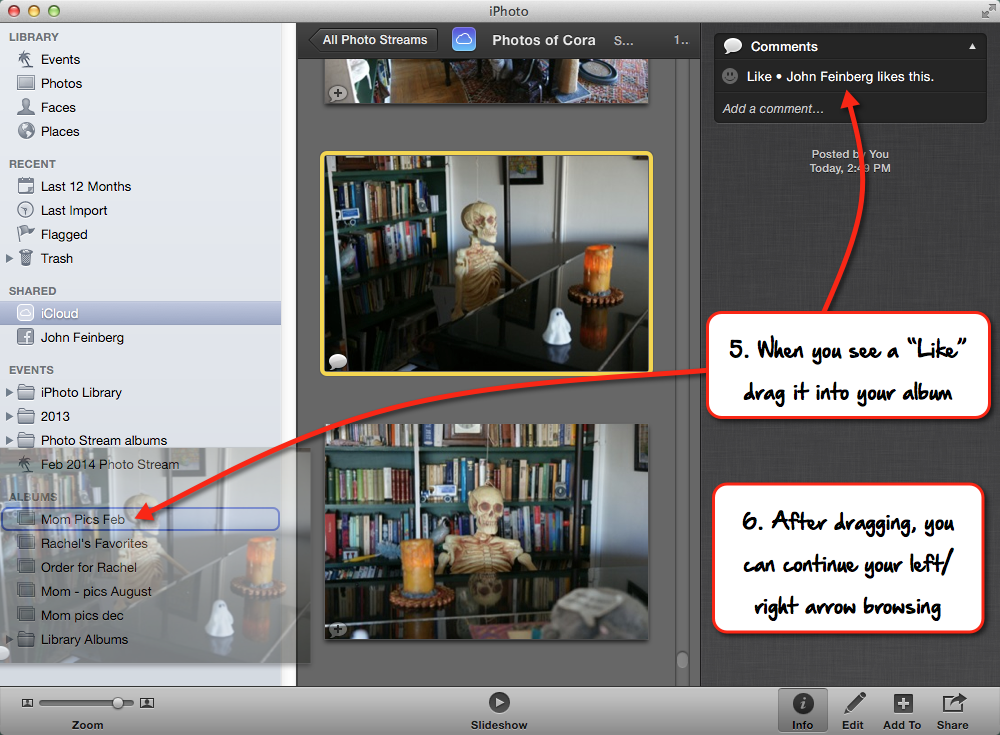 Once you’ve located your “liked” photos, you can drag them into an Album, and unlike Aperture, iPhoto will keep the dragged-in originals more organized

EDITOR'S NOTE: It's possible to see both your Info and Library tab (and therefore Albums collection) at the same time in Aperture by opening the HUD, and setting the HUD to one view and the main Inspector to the other. However there's still the difference of how the images are imported when drag them in from Photo Stream. In Aperture, as the author states, it creates a new “Untitled” project for every image. iPhoto does still re-import each photo you drag, however it imports them into a new project of the original name as the Photo Stream, and all into that same project, not a series of projects with one image each.

Do you have any other clever, non-standard ways to use Photo Stream?

I did not know this before. Thank you for sharing your experience here, it will be helpful for the people like me .

Very useful suggestion . It is very hard work I know but expect from you more. thanks for your tutorial