There’s an annoying bug when editing images using the Nik Collection of plug-ins and Aperture 3.5.1 on Mac OS X Mavericks: once you save the image and go back to viewer mode, it only shows grey. At this point you cannot see any other image in the viewer anymore—edited with Nik or not. Yet interestingly, if you open the loupe, you can see the image through it (see screenshot below). After restarting Aperture, everything comes back to normal. However restarting Aperture every time you edit a picture with Nik Plug-ins doesn’t sound like a good plan.

Here is my workaround:

Do NOT start the plug-in from the viewer mode, but rather from the Browser mode (right click on the image: edit with plug-in, then the Nik Plug-in; Silver Effex Pro 2 for example). Once you save the image and you are back into Aperture, then you can enter the Viewer mode without getting the grey screen bug! 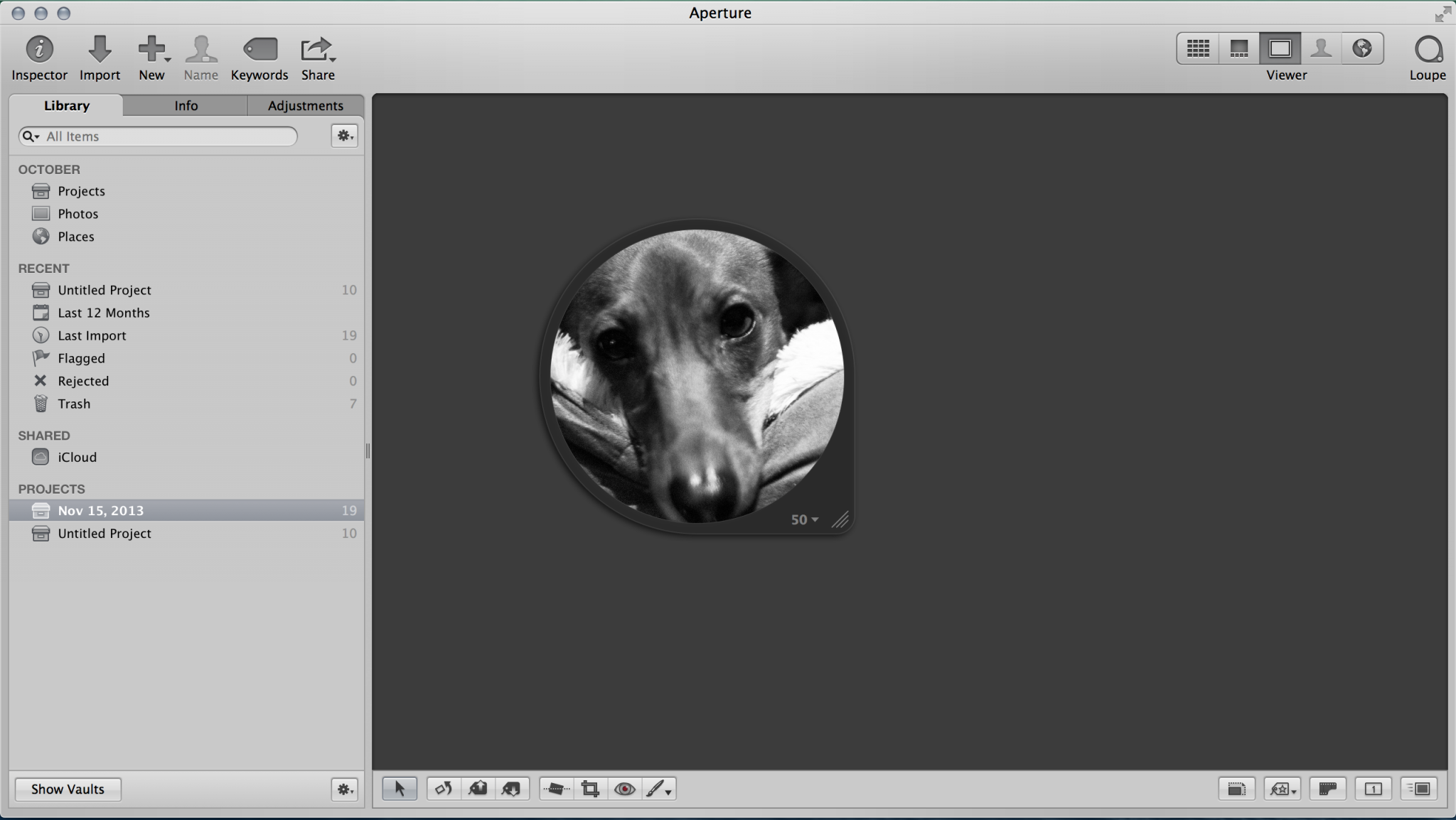 It seems that the bug is related to generating the preview after editing with Nik (although forcing to generate a new preview doesn’t fix the problem).

Let us know in the comments if this works for you!

Interesting.  I am almost always in Browser mode so I never encountered this bug, but I have had some problems with NIK’s HDR Pro 2 and Aperture 3.5.1 and Mavericks.  Last time I just it I had to resort to exporting my pictures to my desktop, then launching HDR Pro 2 separately  and then uploading the pictures into it .  Once I was done, I exported back to the desktop then imported into Aperture.  It was  pain.  And I know others on other sites like G+ have mentioned this as well.  Hopefully, Apple will hear us.

I fixed this problem completely by rebuilding my Aperture library. Now I can go into the Nik Suite from the viewer and back with no problems.

Thank you Tom, will try rebuilding the library and see if it helps. Hope this will be the answer.

Still getting some weird images back from Nik even after rebuilding the library. It is not consistent, it worked well once and then started to get this. really weird. 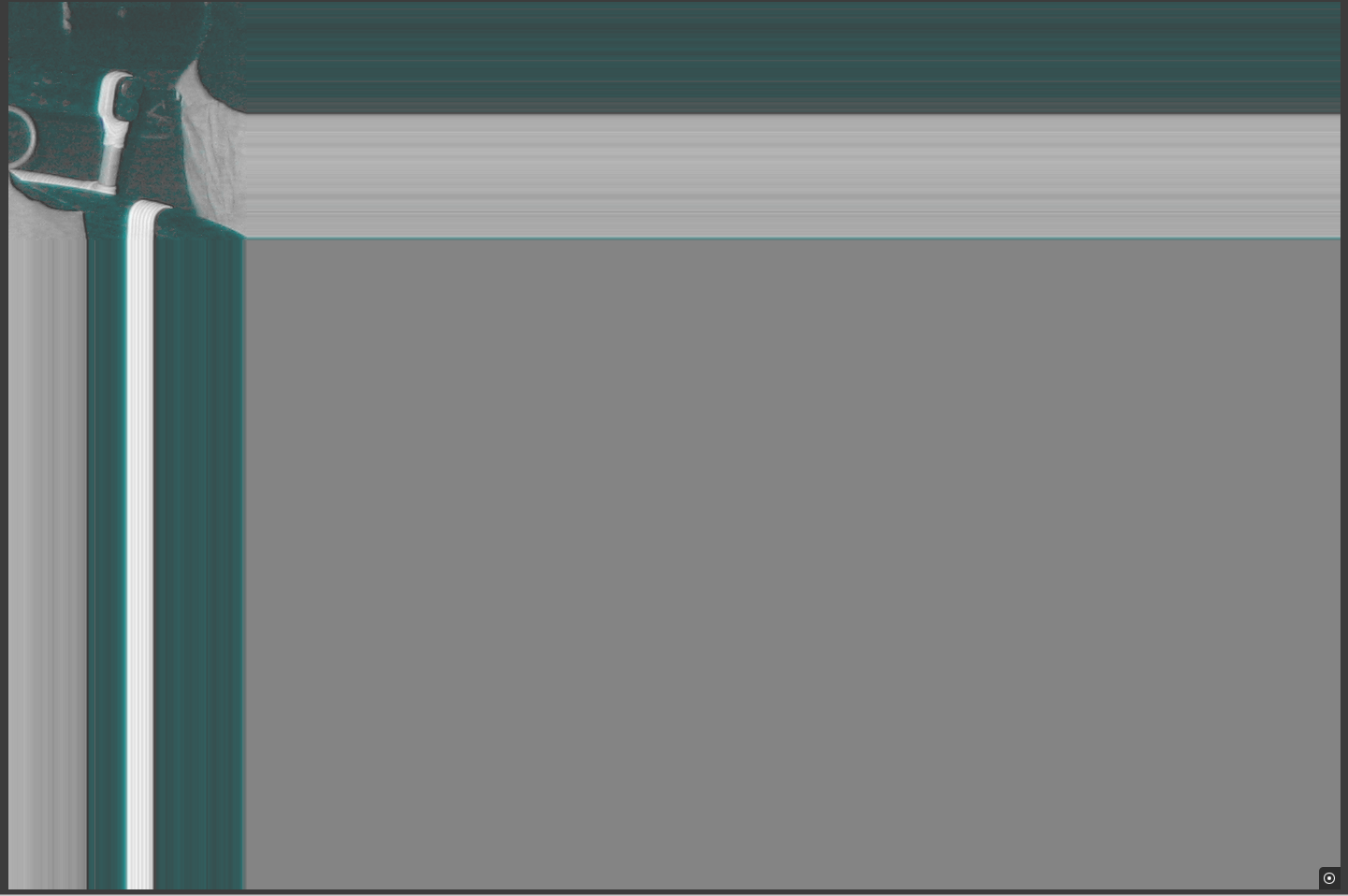 I usually work in Split View or Full Screen, and I haven’t noticed any problem with my Nik adjustments.

I don’t have the problem. Using Aperture 3.5.1 in Mavericks (updated from ML on a iMac mid 2012) but using the Google provided Nik Software from March 2013.

Forgot to mention that I use ‘Split View’ in Aperture.

Thank you - I have the same problem.  I had to restore the total Aperture dB.  A 24 hour job.

I updated Aperture for the WB bug fix and now the program is unusable - yes, I can see all the images in the Browser window, and can export - but that is not a sufficient workaround. My images in the preview window look much like Raphael’s below, if they are not white, or missing. How do I repair the libraries/permissions without being prompted by Aperture first?

Hold down the Command and Option keys when opening Aperture. A window pops up with the options to repair permissions, repair the library and rebuild the library.

Glad to know I’m not alone on this grey screen of death. I wasn’t getting it every time I used a Nik function, but often enough to make me lose a few hairs! I hope the powers that be get this worked out fast…

Thanks Tom - what I hadn’t figured out yet - was the necessity of reopening Aperture after a failed Nik edit. Even scrolling to the next unedited image, Aperture would go nuts - now I got the work-around, no problems and learning to use the browser window. Thanks for all the help on this page!

It happens to me too….with Aperture version 3.4.5 , I didn´t upgrade aperture yet so it is quite weird. Difficult to find out where this problem come from right? I just upgraded to Maverick one month ago and this problem started happening just few days ago without changing anything….

was having this issue. Driving me crazy.  Finally came here to see if it was only me - lol.  I had just installed OnOne software beta and was really kicking myself if that caused it.

will try doing the NIK from browser mode and hope for the best.

Thanks for the recomendations

I should have kept my mouth shut. It happened to me yesterday in Browser view.  If you close out of aperture then come back in it’s gone, but that’s a PITA.  I’ll try the rebuild/repair and cross my fingers.

I attributed it to asking too much of my hardware, but I’ll try the browser option for a while and see what happens.

I’ve had the same problem, using Aperture 3.5.1 and the latest Mavericks OS. I contacted Nik (Google) about the problem and actually got a response.

“Thank you for contacting Nik by Google. I’m sorry to hear that you are encountering that issue. Now that the new Mavericks operating system has been released by Apple, our engineering team is rigorously testing the new system with our software. At the moment, the Nik Collection is not officially compatible with Mac OS 10.9, but the software will automatically update once the necessary changes have been made. We will update the System Requirements listed on our website to reflect Mavericks compatibility once this update has been completed. I apologize for any inconvenience this may cause in the meantime.”

Ron, thanks for that info.  I’m still having the problem in browser mode despite a library repair.

I use Aperture in Split View mostly and it always happens in that view. I’ve tried repairing and then rebuilding the Library and it’s still happening. I was having to quit and restart Aperture every time I run an image through Nik.

However, firing up Nik from the Browser View does work fine. Thanks for the tip!

I’ve been using the suggested workaround quite effectively but a new bug has come up. The edits from Nik plug-ins are no longer re-imported to Aperture. I have checked my Nik Settings without effect and have deleted all the Nik preferences that I can find but to no avail. As soon as I click the ‘Save’ button, it indicates that it will save to a folder called ‘Private’ at the root level, yet there is no such folder. That is the uppermost folder; there are actually about 8 subfolders inside that one. When I navigate (in the save dialog pane) back to my Aperture Library, it is greyed out. So until Nik (Google) gets around to updating its software, I’m cooling my heels. Anyone else having this problem? Any workarounds?

It looks like the new update to Mavericks seems to help a bit - at least it has worked on the only image I have tried with CEP 4 since the update.

I raised it with Aperture via the provide feedback button on Saturday and was very impressed by the speedy response with a workaround. I then had another email this morning advising that tthere was a new Nik Software release.

Updates to the Nik Collection are made on an ongoing basis. These updates may include bug fixes, performance enhancements, new features and additional hardware or software support. All updates will be installed to the computer automatically.

• Fixed crashes with Dfine 2 when launching on Mac OS 10.6

• Improved the click and drag experience when using a tablet

• Analog Efex Pro: Added the affect of the Vary button to the Levels and Curves strength slider

• Silver Efex Pro 2: Fixed the functionality of the Toning sliders

• Silver Efex Pro 2: Fixed an issue with Grain Strength visibility that depended on the preview scaling

What is incredibly frustrating though is that the above claims that ‘updates will be installed to the computer automatically. Thus far I cannot get the apps to update to the 1.109 version - be it the plugins in Aperture or by opening the apps themselves. Anyone got any ideas how the hell you get it to auto update?!

Ok, figured it - just head over to the Nik website and download the trial version again. Ridiculous that there isn’t just an ‘update’ button though - appreciate auto updates might be useful when you don’t know there’s an update, but when you do it’s mighty annoying (especially if like me you generally leave Aperture open).

Thank you!  I followed tricky01’s advice, downloaded the trial. It forced the update and the problem is now gone, frustration gone.

Yes, this workaround worked for me.  Thank you!  However, it is disappointing that I downloaded the Nik apps today and the bug is still present.  I somehow don’t think I should be downloading the trial over the top of the full licensed version.

Can you imagine the this Event data recorder can capture capture information in an accident, also as general driving habits. The data can save lives, but it can also impinge upon privacy. Get more information