The Google Nik Collection was quietly updated the other day… and by quiet, I mean you saw no download, no notification, just *pop* fixed software. Bookmark these release notes to keep track, otherwise you may never know when the changes roll out.

The current update, released December 11, 2013 is version 1.109 and includes the following fixes, which should address the “gray screen of death” issue reported here earlier.

If you want to verify yours has updated, open any Nik plugin, and click the Nik logo in the top right corner.

(Your version number may look different than mine as I'm on the beta cycle, but if you see 1.109, you're good to go). 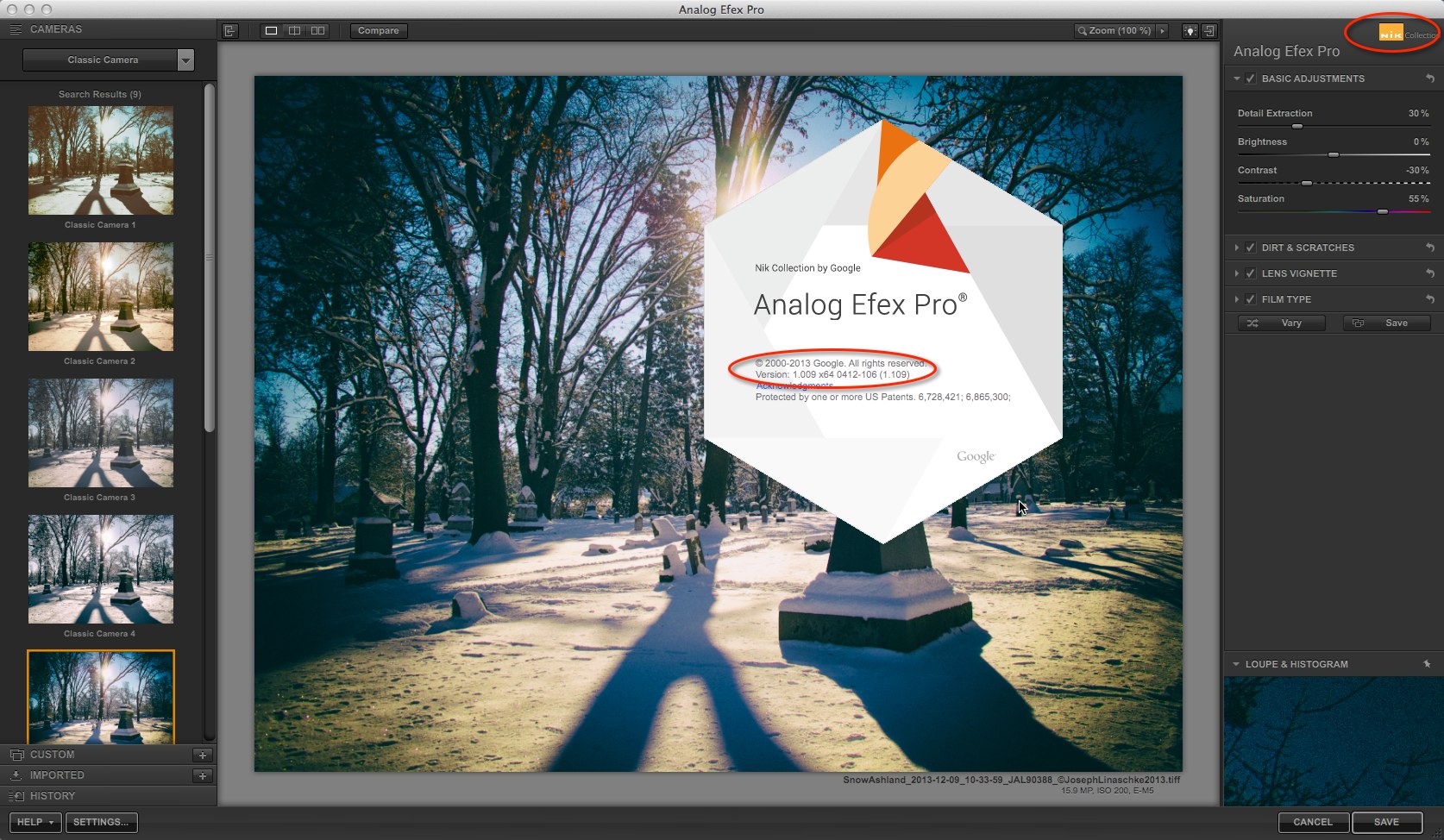 It works.  I admit I thought that this was linked to the recent Mavericks update.  Whatever, I am glad things are working again.

I was hoping this would happen when I got a message to allow google auto updater in my system preferences!

The newest update doesn’t show up.  What now?

I just downloaded it again (from http://www.google.com/nikcollection/ click on “Try Now” at the top) and reinstalled it.  Seems to be working fine.  Last week, I got a pop up window asking me to give Google Software Update permission to access my accessibility settings.  I denied the request, wonder if that’s why I didn’t get the update?

Do you have to re-download all the plugins again or is there an easier way to update?

Reply from PhotoJoseph
on December 18, 2013 - 9:29pm
Really? All of them? Can you post a screenshot? Sounds like an old plugin actually, before it went to the Google.

The plug-ins on my Mac have two separate version numbers, one in brackets, and the first number varies depending on which plug-in you’re looking at, for example

So what are we to do if the update is no pushed down?  I didn’t get it either in my  iMac or my MBA.  Downloading and Re-Installing sounds like a pain.

I didn’t know anything about this NIK upgrade, thanks for the heads-up Joseph. I’ll get on to it asap. It’s great software and I often use some/all of the plugins.

Just back from vacation,

Which is the best way to source the update?

EDIT: Just sent NIK an email asking how I get the update 1.109

Got a reply in 5 minutes confirming my request

haven’t tested it out yet but i guess its all good, when I click on the Nik logo, it is now showing 1.109

Tks for the heads-up Joseph!