2013 may not have brought us a version-number release of Aperture, but it did bring us a significant number of updates, fixes and newly supported cameras, plus a slew of new or updated plug-ins, add-ons and ancillary tools for our photo processing goodness — and of course some new training material! Here's a list of goodness I've put together, although I'm sure I've forgotten a few things. Add to the list in the comments, and Happy New Year to all! 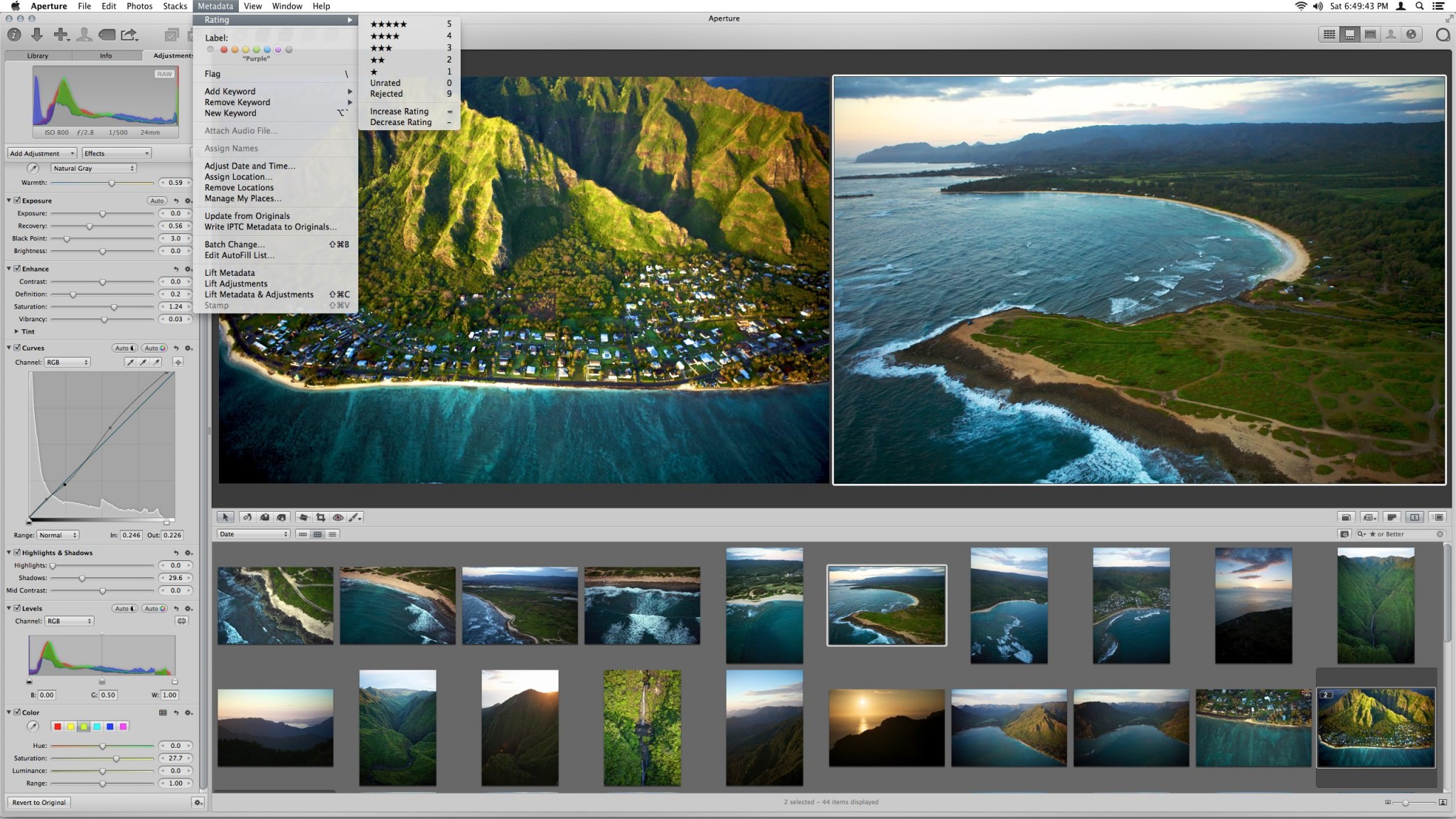 Aperture itself received four updates in 2013, including versions 3.4.4, 3.4.5, 3.5 and 3.5.1 in April, June, October and November, respectively. Needless to say, 3.5 was the biggest release and the one that added new features, including iCloud Photo Sharing, Places updated for Apple Maps, iOS 7 filter support, and SmugMug support (which I finally recently did a Live Training on). Apple also updated the Aperture SDK to version 3.4 in June.

I didn't release a lot of new training this year—shockingly little, in retrospect, however there wasn't much new to train on! Here's what was released on ApertureExpert, Lynda.com, and other places, by ApertureExpert as well as other trainers. I'm sure there's more that I missed; please be sure to list it in the comments.

Now for third party apps and plug-ins. This is where I'll miss many things, but here's at least the ones that were mentioned on the site in 2013.

This site of course saw a massive upgrade that took over half a year to develop, and still has a laundry list of features to add, but it's up and running and I'm thrilled with it—I hope you are too! On the site were a total of 109 new posts in 2013, and the forums now include over 6,800 topics and over 13,000 posts.

What's next? Of course we all expect a major Aperture release in 2014, worthy of a full version number designation. The 2013 Aperture 3.5 release was a pretty minor update as far as features goes, and in 2012 we got Aperture 3.3 which had quite a few new features, a new look, and many under the hood changes. Obviously we are far, far overdue for something really big. And unfortunately for Apple, the longer we wait, the bigger of a release we as users are going to expect. No matter what it does, some users will be disappointed. We've already lost many users to Lightroom, and there are constant discussions on the topic in the forums here and on Google+, but I maintain that those who wait will be rewarded.

My current belief — and this is in no way based on any factual information — is that what we're waiting for is significant in the scope of the Pages, Keynote and Numbers (iWork) updates we saw in 2013. Those apps were completely rewritten from the ground up, and for a specific reason—for complete feature parity with their iOS counterparts. My understanding is that the iOS and OS X versions now share a command code base. What if Aperture is undergoing the same change? I don't foresee a total Aperture clone on iOS, but it would require a completely new version of Aperture to be able to take everything done in iPhoto on iOS (or even a smaller Aperture on iOS) and move that to Aperture with zero capability loss. Imagine a workflow where you can ingest on an iPad, do much of your work there, then copy (or just open an iCloud shared Library) on the desktop and continue where you left off, just like you can with Pages, Keynote and Numbers today. Maybe even open the Library again on iOS, perhaps not having every feature you do on the desktop, but not losing an changes made on the desktop version. Personally I love iPhoto on iOS. It's a fantastic app with great features, and once you learn the gestures, it can be very quick to use. If every tool there mirrored a tool in Aperture, and I could start a project in iPhoto on iOS and finish it in Aperture on the desktop, I'd love that.

Given the time we've waited for a major Aperture update, that's what I think is going on. Again, I have no factual information to base this on; it's just my sentiment after seeing what happened with iWork, and seeing how long this has taken. Hopefully, 2014 will reveal all.

I am aware that many won’t agree, even less like it, with this view but I am having painful doubts about the future with Apple, not just with Aperture but with their ability to deliver quality and to manage the inevitable clash between their desktop and mobile products. I’ve discussed this grim outlook here http://www.photoanimalium.com/opinion-apples-values-still-desirable-phot… for those interested. As I closed the post: I do hope to be proven wrong!

Also congratulations on the new site: it looks gorgeous. There are a few teething issues here and there (social login) but I had the same too and I’m sure they’ll get corrected.

I have to agree with Joseph that we should see a major update to Aperture.  Heck…Apple’s Aperture website still references it’s “iOS5 Photo Features”.  I was kinda (ok…a LOT ) bummed that Aperture didn’t get an overhaul when the Mac Pro was released last month.

Charles, interesting article you share. I have indeed no doubt that consumer market will be well served by Apple this year, prosumer as well, but I start to see cracks in the software and that worries me. For Aperture, I’m using it as main DAM and for basic editing, heavy lifting is done with PS and nik. I’m now considering using DXO 9 as RAW engine rather than Aperture. But I still pray to see a good quality update of Aperture where I can do 90% of all that without need of other apps. Praying yes but starting to doubt…

Spine-chilling notion that they will rip out any feature that won’t run on an iPhone. OK, that’s not quite what you said, but it’s what they did with Numbers and Pages where you can’t even change a print margin any more.

They haven’t done it for Final Cut and Logic Pro which didn’t get the strip-down treatment of iWork, but they have shown where their focus is for Pro apps: video and sound. I just hope this is because they have something truly remarkable to announce and not because they don’t feel like competing in that market anymore…

Something else I noticed today: whilst the Nikon Df has been released after the Pentax K-3 the Df has received Apple love already in their last mid-Dec RAW update but the Pentax K-3 has been ignored: this shows that the resources working on Pro-grade photo apps is so scarce that they must do strict prioritization on RAW support, not a very good sign on how much Apple is prepared to invest in photo compared to video and sound… Chris

We all have different views.  To me the hand writing was on the wall when the 5S was introduced.  I don’t believe Apple felt a 64 bit processor was needed in a telephone, nor that they re-wrote iWorks with a common code for iOS, and OSX just for fun.  There is no doubt in my mind they are going to come out with a competitor to Microsofts Surface that will use the ARM 64 bit processor, and run either the desktop applications, or some sub set of them.  Hence the need to re-write the code for a common base.  Probably 12 inches, a keyboard of some sort, and possibly a mini thunderbolt output.   I’m sure so far this has been a test run.  Their software engineers are probably locked in a basement as we speak rewriting  the code for the software they feel will be needed at introduction.  Probably the 11 inch MacAir will be dropped.  Apple is no stranger to making  major changes remember OS9 to OSX, and the Power PC to Intel.  While the ARM chip is not powerful enough for a desktop, it is for a small hybrid device.

Re Df support; I would imagine that as the Df shares a sensor with the D4 it was pretty easy to add. Not sure about the K-3. The camera manufacturers don’t make it any easier for third party apps, for example I believe Nikon encrypts WB info which then need to be hacked.

It’s not just pro photo apps mind; as RAW support is in OS X then you need it for most apps including Finder.

Looking forward for some updated Aperture release in 2014. But I think sometimes a new version is not always better, so need to be aware of this. Best of luck for 2014!

Really impressed with your new website.  Now I have a go-to place to learn more about using Aperture.  Thanks for being there.